Kicking the student loan can down the road, again

Breaking this afternoon, the Biden administration has booted the start date for resuming payment of student loans almost into early summer.

The Biden administration on Tuesday announced that it will extend the payment pause on federal student loans until June 30 while its debt forgiveness plan remains blocked by federal courts.

Federal student loan bills had been scheduled to resume in January.

I'm confident that our student debt relief plan is legal. But it’s on hold because Republican officials want to block it.

That's why @SecCardona is extending the payment pause to no later than June 30, 2023, giving the Supreme Court time to hear the case in its current term. pic.twitter.com/873CurlHFZ

…“We’re extending the payment pause because it would be deeply unfair to ask borrowers to pay a debt that they wouldn’t have to pay, were it not for the baseless lawsuits brought by Republican officials and special interests,” Education Secretary Miguel Cardona said in a statement.

Again, to the Biden administration, it’s “deeply UNFAIR” to ask borrowers to pay anything more on a debt THEY OWE, but might have a chance at slipping out of. That’s what the secretary is saying here.

The announced plan as it stands now is to knock the payment holiday back to 30 June, after this SCOTUS session wraps up. Should the injunctions against forgiveness be upheld or flat-out ruled unconstitutional, payments will supposedly resume 60 days later, so add another two months to that. As even Nancy Pelosi admitted during one of her lucid moments, Biden doesn’t have the authority to outright cancel the debt himself, so we are left to play this never-ending repayment pause-a-thon game.

“People think that the president of the United States has the power for [student loan] debt forgiveness. He does not.”

As I wrote earlier this month, once word of this “forgiveness broke (before the election of course), borrowers were already spending their ill-gotten lucre in their heads. The Biden administration, in their court filings, had the unmitigated nerve to assert that, because the payments had been paused for so long, those amounts had already become part of a regular budget and would cause irredeemable harm if they had to be recouped to pay that student debt. Shoot! They just might not pay another dime at all, they’re going to be so disappointed.

…“These student loan borrowers had the reasonable expectation and belief that they would not have to make additional payments on their federal student loans,” Kvaal said. “This belief may well stop them from making payments even if the Department is prevented from effectuating debt relief.”

Trying to force people to pay debts they willingly signed papers agreeing to pay is “callous,” to the Biden administration.

I’ll give you “victimhood” – the American taxpayer, and every honest soul who worked to pay off their loans, worked while going to school, or, like hubs and I, paid for our kid’s school as he went. Granted, Ebola didn’t go to a chi-chi Ivy League school, but we still wrote checks as needed to Pensacola State and the University of West Florida for all those credits of his. OUCH. So my blood boils when I read loathsome little ingrates like this exploding about the payoff being delayed. 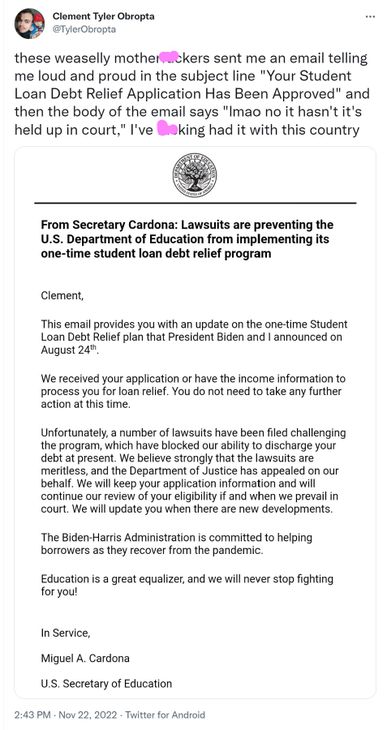 He’s a “film critic and culture editor.” Perhaps he should have chosen a cheaper venue for such a demanding major if that’s what his degree is in. The job market for film critics is somewhat limited, I do believe. But he’s “effing had it with this country.”

Cry me a river, you spoiled monster. And all your gimme gimme friends.

If You Really Wanted to Destroy the U.S., Then...
Townhall
Place your bets! People are speculating why Klaus Schwab is in Washington, DC
Twitchy
Did an ‘LGBT-Caucus’ California State Senator Just Pull a 'Jussie Smollett?'
Redstate
Police Release Confusing Information About University of Idaho Murders
PJ Media