A tale of two Erics, each endorsed by Trump

This should have been his easiest endorsement of the year.

Until recently the Missouri Republican Senate primary was a three-way race between state AG Eric Schmitt, Rep. Vicky Hartzler, and disgraced former governor and accused domestic abuser Eric Greitens. Trump pulled the plug on Hartzler a few weeks ago, vowing that he wouldn’t endorse her because “I don’t think she has what it takes to take on the Radical Left Democrats.” After polling in the mid-20s in mid-July, she failed to reach 20 percent in the two most recent surveys. Trump appears to have tanked her candidacy. Suddenly the race has boiled down to a choice between the Erics. Which would he endorse?

In the end he did the Trumpiest thing imaginable. Yesterday, he endorsed “Eric.” 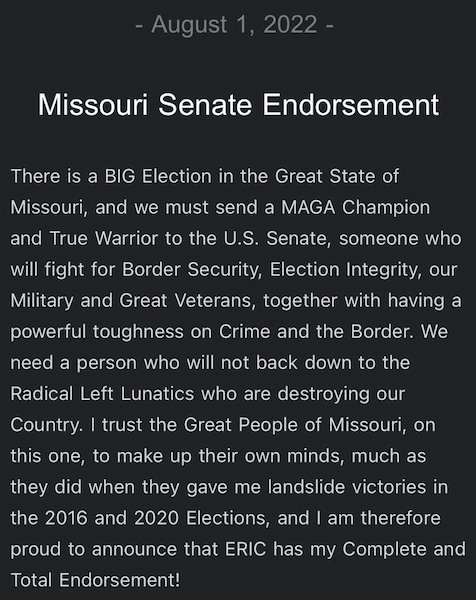 Normally when he endorses late in a race, he sticks with the frontrunner so that he can take credit when that candidate ends up winning. That’s how it went down in Pennsylvania, when he threw his support to Doug Mastriano after Mastriano had already broken from the pack in polling of the gubernatorial primary.

If Trump had followed that M.O. yesterday, his choice would have been obvious: He would have backed Schmitt. Greitens led in the polls as recently as June but an alarmed GOP establishment scrambled to try to take him down. Some of that effort may have been fueled by sincere moral revulsion at the prospect of Greitens winning but largely it was driven by fear that he might pull a Roy Moore in the general election and blow a safe red seat that should be a gimme for Republicans. At a minimum, with Greitens as nominee, the RNC and NRSC would be forced to spend money in a state that normally would stay red without a second thought. That money could be spent more usefully in true battlegrounds like Pennsylvania and Georgia.

The “stop Greitens” initiative appears to have worked. A bombardment of attack ads by anti-Greitens PACs on Missouri TV last month drove him from 26 percent in June polling to around 20 percent recently. With Trump having already given Hartzler a thumbs down, that left Schmitt as the logical beneficiary. He’s jumped from 20 percent in June to 32 percent or better in four of the last six polls, reaching 39 percent in one. In three of those polls, he’s led by double digits. In Trafalgar’s last four surveys of the state, he’s gone from trailing Greitens by seven to trailing him by one to leading him by seven to leading him by 13(!). It sure looks like he’s going to win tonight.

So why isn’t frontrunnin’ Donald Trump all aboard the Schmitt train?

Multiple reasons. One is this petty nonsense, which is on-brand:

Per people close to Trump, this story/poll https://t.co/Jol1JvIsio was brought to his attention and contributed to why he was leaning Greitens today >>

That poll was commissioned by Schmitt consultants and found Trump leading the 2024 primary comfortably in Missouri, 42/18, over Ron DeSantis. But “several in-the-know strategists told Breitbart News that the poll is obviously fake because it actually undercounts Trump’s support,” per Breitbart reporter Matthew Boyle, never mind that 42/18 is broadly in line with national Republican primary polling between Trump and DeSantis lately. Could it be that those “in-the-know strategists” were aligned with Greitens and spreading rumors of fake polls by Team Schmitt in hopes of influencing Trump’s endorsement?

If so, it almost worked. In fact, it did work by denying Schmitt Trump’s singular support.

Another reason Trump didn’t want to cross Greitens is because he’s the preferred choice of the sort of hardcore MAGA nihilist who bases their political choices on whether a candidate is hated by the right people. Lots of Democrats and moderate Republicans regard Greitens as human garbage for the scandal that originally drove him from office and the allegations of abuse by his ex-wife, and they’re correct to do so. But some on the right seem to have concluded that decency is itself a sort of ruse perpetrated by the establishment to keep fightin’ populists down, in which case the only proper way to own the libs in this race is to back Greitens:

Kim’s not messing around with endorsing two Erics. Greitens is “the favorite of the MAGA movement.” pic.twitter.com/UPV5prvVYS

Trump doesn’t like to disappoint “his people” and he clearly doesn’t care about maximizing the GOP’s chances of winning Senate seats. If he did, he wouldn’t have endorsed Dr. Oz or Herschel Walker. So in the end he was torn between backing the likely primary winner and “safe” choice for election this fall, Schmitt, and the degenerate populist with lots of MAGA fans and establishment enemies, Greitens. According to Politico, he was wrestling with the decision all day yesterday before finally opting to punt:

At the center of Monday’s episode, according to several people familiar with what transpired, was Kimberly Guilfoyle, the fiancée of Donald Trump Jr. who spent the weekend making the case for Greitens while attending a golf tournament Trump hosted at his Bedminster, N.J. club.

A little after noon, Trump was having a previously scheduled meeting with RNC Chairwoman Ronna McDaniel, where the Missouri race became a topic of discussion. During the sit-down, Trump called Missouri Sen. Josh Hawley, a Greitens foe who referenced a recent poll showing the former governor trailing in the primary…

By the time Guilfoyle made it into the room, Hawley was no longer on the line. McDaniel, who like other senior Republicans tried to dissuade Trump from endorsing Greitens for fear that he could lose the seat to a Democrat in the general election and that his nomination would force Republicans to spent money in a state that should be safe for the party, remained in the meeting. She also argued that a late endorsement would do little to alter the race, with most polls showing Greitens lagging behind in third place, and that it would make more sense for Trump to remain neutral.

Allegedly he spent hours dialing up allies and asking for input despite the fact that Schmitt was obviously — obviously — the more responsible pick both for the country and the party. Ultimately he couldn’t pull the trigger, and even ended up phoning Schmitt and Greitens individually to tell them they had his endorsement without mentioning that he was also endorsing the other guy. Which, admittedly, is pretty funny.

Both candidates were happy to claim victory anyway.

🚨ENDORSEMENT—PRESIDENT TRUMP🚨I’m grateful for President Trump’s endorsement. As the only America First candidate who has actually fought for election integrity, border security & against the Left’s indoctrination of our kids—I’ll take that fight to the Senate to SAVE AMERICA!

I’m honored to receive President Trump’s endorsement. From the beginning, I’ve been the true MAGA Champion fighting against the RINO establishment backing Schmitt.

President Trump said it best when he characterized Schmitt’s campaign as ‘great dishonesty in politics.’

Believe it or not, there’s actually a third candidate in the race named “Eric.” Congratulations to Eric McElroy on the big endorsement!

I’ll leave you with this thought from, uh, another Eric (or “Erick”). Congrats in advance to Trump in case Greitens pulls the upset tonight on leading Missouri into a choice between a Democrat and a grossly unfit Republican. That’s become a recurring dilemma since he took over the party.

Endorsing "Eric" in Missouri is the sort of shitposting you expect from Trump and also the sort of stunt that reminds you character still counts, and he'd still be President if he had any. If you can't clearly reject a sociopathic wife beater, maybe sit this one out.