Was the announcement of Barrett’s nomination a superspreader event? 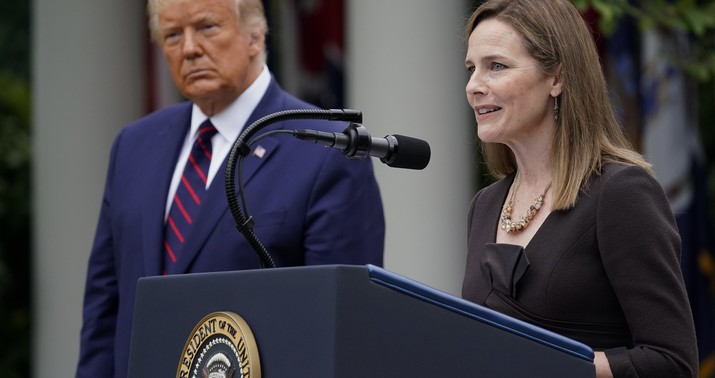 Out: Typhoid Mary. In: COVID Amy.

No, actually, Barrett’s one of the few people who was there who can presumably be ruled out as contagious. She had the disease this past summer and recovered. If she’s currently immune and if people who are immune can’t spread the virus — two assumptions I’m making — then Barrett’s not the cause of this chain of transmission.

Here’s what we know. Trump was there. Mike Lee was there, hugging people with his mask off. Hope Hicks, given her role in the White House, was almost certainly there. And so was the president of Notre Dame, who just discovered today that he’s positive for coronavirus as well:

BREAKING: Notre Dame President Fr. John Jenkins, who was at the WH SCOTUS announcement on Saturday and was criticized for not wearing a mask and shaking hands, has tested positive for COVID-19.

This was just sent out to the campus.

Unclear if he had it during the WH event. pic.twitter.com/2cR4eaVMzb

Students at his university are understandably annoyed that he turned out to be one of the many miserable hypocrites at that event who preach precautions against COVID and then ignore their own advice when they want to have fun:

University President Fr. John Jenkins and Notre Dame Law School dean G. Marcus Cole both attended Barrett’s nomination ceremony. A video of Jenkins failing to follow social distancing protocols or wear a mask at the event — held in the White House Rose Garden — quickly made the rounds on social media. Cole, seated next to Jenkins at the event, was wearing a mask…

His refusal to wear a mask, a simple action he has encouraged in countless email sign-offs to the University community, is puzzling, and we must wonder if it was due to pressure from the surrounding political environment. Regardless, this is an issue that should never be political.

Many students and staff expressed their frustration and anger over seeing health and safety guidelines so blatantly broken, with some even resorting to reporting Jenkins on Notre Dame’s incident reporting form and others calling for his resignation.

Jenkins is blaming the White House: “When I arrived at the White House, a medical professional took me to an exam room to obtain a nasal swab for a rapid COVID-19 test. I was then directed to a room with others, all fully masked, until we were notified that we had all tested negative and were told that it was safe to remove our masks.” I believe him. But he really, really should have known better than to take Team Trump’s advice on whether mask-wearing is important:

When America’s MAGA elite convene, pandemic precautions are out the window, I guess. Another example was Trump’s fundraiser in Minnesota on Wednesday night:

Political consultant Blois Olson said on WCCO radio that he had seen images from the Shorewood fundraiser that showed a disregard for COVID-19 precautions.

“Staff and guests lingered after the president was there,” Olson told host Dave Lee Friday morning. “They sang karaoke, they had their arms around each other.” Among those pictured: South Dakota Gov. Kristi Noem, Olson said, citing images of a private Instagram account.

One of the most notorious and instructive outbreaks of the entire pandemic was the superspreader event during a choir practice in Washington in early March, where 52 people where infected. Scientists concluded that the nature of that gathering was key: When you’re singing, you’re projecting your voice — and particles that are in your mouth and throat — much further than when you’re speaking normally. Singing and shouting are the last two things you’d want to do in close quarters with strangers. So naturally it’s exactly what the imbeciles at the fundraiser were doing.

This isn’t just a Trump problem. Nikki Haley, a prominent member of the “reasonable” wing of the GOP, obliviously tweeted this photo yesterday:

New Hampshire is knocking it out of the park with 99 strong, smart, amazing Republican women running for office! I had the pleasure of talking through the challenges of running for office and the rewards of public service. The future is bright in New Hampshire. Go get em ladies! pic.twitter.com/xrNhNnbyCt

Contemptible, irresponsible, unfit. Someone who won’t bother to take the most minimal care not to endanger the people around them is unfit to lead others.

New infections at the White House are still being reported as I write this, by the way:

News: I have obtained a memo from the @WHCA board to WH reporters with word of "two additional cases of COVID-19 at the White House." A journalist received a preliminary positive result. And a WH staffer who sits in the "lower press" area received a confirmed positive result.

There are two wrinkles in the theory that the Barrett announcement seeded the outbreak engulfing the government today. One is that it took place outdoors. Granted, no one ever said outdoor transmission was impossible, but we wouldn’t expect to see so much of it from this one event. Which makes me think maybe the infections didn’t happen outdoors. Jenkins noted in his statement that he and other guests were tested in a room and then told it was okay to remove their masks. Did someone in that room have a false negative? How long were they mingling in that room with their masks off before they went outside?

Was there some other indoor party or function after the announcement that was attended by Jenkins, Lee, etc?

The second wrinkle is that, according to the Times, Ronna McDaniel was last in contact with Trump on Friday, September 23. The Barrett announcement was the following day. If that’s true then obviously McDaniel didn’t get infected at that event. Maybe her infection and Trump’s infection really are completely independent of each other, with the timing just a freakish coincidence. Or maybe there was an outbreak already brewing at the White House last Friday, McDaniel got infected then, and then Trump or some other WH staffer who was already infected went about spreading the virus at the Barrett event.