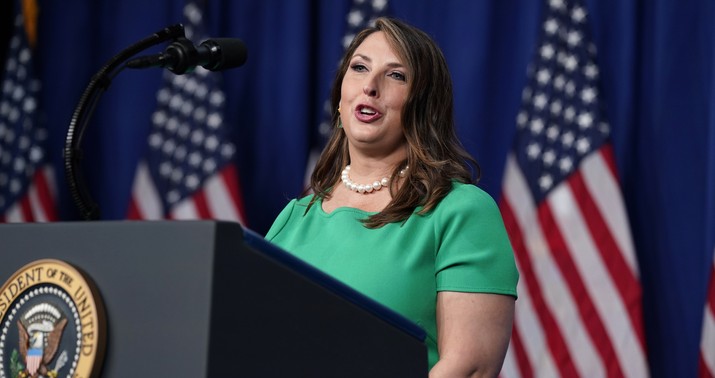 People are complaining this morning that she did a Fox News hit yesterday, apparently after her diagnosis, and didn’t think to mention that she was positive. But since when is one required to share health details with the public? Even now, there are outbreaks on pro sports teams and we’re never told which athletes are the ones who are infected despite the fact that they’re among the most famous people in America.

McDaniel doesn’t owe the public a report on her condition. But she *did* owe it to people she’d been in contact with during the days prior to testing positive. I’m keen to find out if she reached out to anyone to warn them to quarantine or if the plan was to sit by silently as this chain of transmission grew because she preferred that outcome to bad press.

Note the timeline in this report.

Ronna McDaniel, the chairwoman of the Republican National Committee, has tested positive for the coronavirus and is experiencing mild symptoms, according to several people briefed on the situation…

She was last with Mr. Trump last Friday, and has been at her home in Michigan since then, the people briefed on the matter said.

She received her diagnosis on Wednesday, they said. After a crowded donor event in March at Mar-a-Lago, the president’s private club in Florida, Ms. McDaniel fell ill, but she tested negative at the time.

It could be that she and Trump caught the virus entirely independently, at completely different gatherings, and that the timing is a pure coincidence. But that would be some coincidence. If in fact that they’ve both been infected since Friday, with symptoms only beginning to show in the last 48 hours, then it seems possible that Trump — and members of his retinue — were infected and contagious at the debate on Tuesday night.

Did Trump infect Joe Biden? Did his selfish family and aides, who refused to wear masks at the debate, infect anyone on Biden’s side?

I was there in the debate hall. The entire Trump entourage came in w masks, took them off as soon as they sat down, refused to put them on when asked by Cleveland Clinic personnel. Flouting defiantly the law & rules. And Trump shouting only 8-10 feet from Biden for 90 mins. Oy

The pool reporter at the debate filed this note at the time: pic.twitter.com/whWoXRTrRV

“That’s all you can do.” If you think this country is embittered by partisan animosity now, let it turn out that Joe Biden or some member of his family got sick because Eric Trump or whoever couldn’t be bothered to look “weak” by putting on a mask for 90 minutes.

Oh, and of course no one notified the Biden campaign after Hicks’s test came back positive:

.@sarahmucha reports: There was no contact from the Trump campaign or the White House to alert the Biden campaign of possible exposure, per a senior campaign official who was with Biden at the debate.

That’s not really a partisan thing, though. Reportedly a small group of White House staffers — presumably including Trump himself, since his health is paramount — found out she had COVID on Wednesday night. Naturally that meant a whole lot of other people who’d recently had contact with her might have it too…

…but that didn’t stop Trump from carrying out campaign events:

.@cbsnews has learned Hope Hicks tested negative for COVID-19 Wednesday morning, so she boarded AF1. She developed symptoms during the day and received a second test, which came back positive. The White House knew about this Wed evening but Trump still had a fundraiser Thursday.

He held a rally in Minnesota on Wednesday night at which aides thought he looked “exhausted.” Whether he and his team knew of Hicks’s diagnosis before or after he went onstage is unknown right now. If he knew and decided to hold the event anyway, it would be emblematic of his short-sighted, self-sabotaging approach to COVID from the beginning. Reopening early instead of focusing on containing the virus risked sustained community spread, which would lead to a longer economic slowdown, but he couldn’t wait. Going onstage if he knew that there was a chance he was infected risked a terrible PR backlash because it would prove that Trump was once again taking the virus too lightly, unwilling to self-quarantine to protect the people around him. But again, he had other priorities.

You would think today would be a fine time for the White House to start aggressively taking precautions against infection, something they’ve been lackadaisical about for months inside the building, but no. Mark Meadows showed up to greet the media without a mask:

Scott Atlas, the non-epidemiologist who’s now in charge of the COVID task force for some reason, was also seen maskless:

Scott Atlas outside west wing moments ago. No mask. From our pool feed. pic.twitter.com/316YGpXLLI

I assume they’re behaving this way because the boss would rather continue to signal his and his team’s deep irresponsibility about protecting others rather than admit they should have been more careful all along, but I don’t know. Maybe Meadows and Atlas themselves believe it’s more important to own the libs at a moment like this than to emphasize to the public that COVID is no joke. The odds are very much with Trump on recovering. But the PR damage this is going to do to his campaign, basically just underlining the fact that his administration never took the pandemic seriously enough, is immeasurable.

One more point. Was the White House actually going to try to cover up Hicks’s diagnosis? It leaked to the media anyway, but what was the plan if it didn’t? Were *any* of the people she’d been in contact with going to be told for their own safety?

It's not just about masks. Hiding a positive test is also *precisely* what we want to discourage people from doing. When Hope Hicks tested positive, everyone she'd had close contact with should have been notified immediately and quarantined. They weren't.

Several senior staffers did not find out that Hicks had tested positive until last night, despite Meadows saying here they found out around 1:15 p.m. yesterday. https://t.co/rSKtny6yuA

The entirety of Congress is wondering this morning whether there’s an undiscovered chain of transmission silently working its way through the Capitol right now that might have started by contact with officials from the White House. CNBC is reporting that “GOP donors are panicking after being around President Trump during a fundraiser at his golf course in Bedminster. 30 to 50 donors were close to six feet of the president at the event, most of the interaction was outside.” Was anyone at risk going to be told if the news didn’t leak?

And is that why it *did* leak? Because if it didn’t, no one in government and on the campaign would have had fair warning to protect themselves?