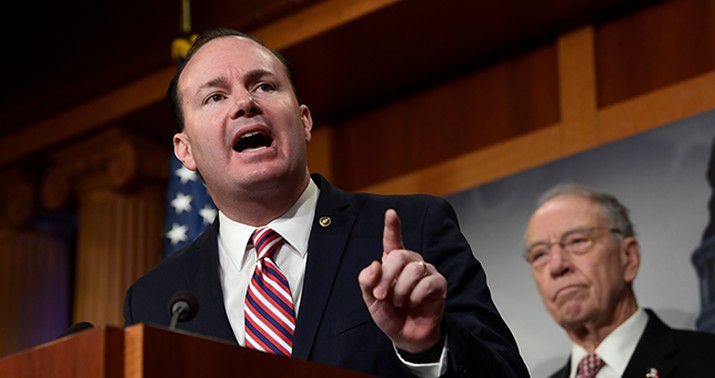 Looks like we do indeed have ourselves an outbreak on Capitol Hill.

As with Ronna McDaniel’s infection, it’s impossible to know (yet) whether Lee contracted the virus in the same chain of transmission as Trump and Hope Hicks. But he was at the White House a few days ago for the announcement of Amy Coney Barrett as Trump’s SCOTUS pick.

He had a mask with him — in his hand, as he hugged and kissed other people there.

Ah, yes, the best place for your mask as you hug and kiss and greet multiple people is IN YOUR HAND pic.twitter.com/xNDl1Z1fEK

If this is all stemming from the White House, how long has the outbreak inside that building been under way?

Three days ago, Lee met with Barrett in his office. Again, without a mask:

I was remarkably impressed by Judge Barrett. My meeting with her was fantastic. She is a judge, a legal scholar, and a lawyer with outstanding credentials. We had a great conversation and I am very much looking forward to speaking with her more during her confirmation hearing. pic.twitter.com/rfGt717PlW

Barrett tested negative for coronavirus this morning. The plan is for her to continue her meetings with senators amid the haste to get her confirmed, which seems like an exceedingly bad idea under the circumstances. It’s time for Zoom chat, not grip-and-grins.

Nothing would surprise me at this stage of the mad, hallucinatory narrative of 2020, including an “Amy Coney Barrett, superspreader” subplot.

Doctors this morning are trying to guesstimate when Hope Hicks first became infectious, although that assumes that Hicks is located somewhere near the start of the chain of transmission rather than the end of it. We don’t know that she gave Trump COVID; Trump might have gotten it from someone else and given it to her. One physician said that, in terms of probability, Hicks was infectious for three days before her positive test on Wednesday. If so that would mean she was infectious at the debate. Other experts think it’s highly likely that Trump was infected before Wednesday as well, as the virus simply doesn’t incubate quickly enough for him to have picked it up from Hicks on Tuesday or Wednesday and then immediately tested positive yesterday. In fact, some data suggests that older adults have longer incubation periods. Maybe he picked it up last week, in time to be infectious for the Barrett announcement.

Which means Trump might have been contagious when he was 10 feet away from Biden and yelling at him on Tuesday night. This is good news…

…but it could be that Biden is infected and still in the incubation stage. There may not be detectable levels of virus in his system — yet. Let’s hope the next five days of tests are negative as well.

As for how Hicks would have managed to infect Trump when the people around him are supposedly being tested daily, there’s an obvious possibility: They’re cutting corners on the tests.

(2) an asymptomatic spreader to have been undetected and thus get close enough to transmit to POTUS, FLOTUS, and Hicks, and (3) other White House cases to remain undetected because tests haven't been run yet.

There’s another possibility. No test is perfect, not even the traditional big-swab-up-the-nose one. Rapid tests of the sort used by the White House are even less reliable:

WATCH: @ScottGottliebMD discussed the potential for false negatives with the White House-approved #COVID19 #Abbott testing platform back in May

"The reason why the White House prefers the Abbott machine is it gives a result in 5-15 minutes, #GeneXpert takes about 45 minutes" https://t.co/9WPYaxTDgR pic.twitter.com/G9MCLILMCh

This is why masks should be worn even in an environment when everyone’s being tested regularly. The tests don’t catch every infection. Trump, Lee, and McDaniel are all likely to survive their bouts with COVID, but Trump’s presidential chances probably aren’t, especially if he’s off the trail for two weeks. The White House should have been more careful for his own sake.

As for the president’s prognosis, there’s no good outcome for the country. If he ends up with a severe case of the disease, that’s terrible for humanitarian reasons. If he ends up with a mild one, that’s terrible insofar as the wrong lesson will be gleaned by many millions of idiots from the episode. This morning Brian Kilmeade previewed how it’ll be spun if he’s back on the trail in 10 days, hopefully none the worse for wear:

“What if the most famous person in the world gets it and in ten days is back out? Doesn’t that also send a message that you can say whatever you want in stats and graphs but I give you an example of somebody who is in that danger age of 74, who gets it and beats it” pic.twitter.com/69l6Bnzghi

If Trump recovers quickly, Timothy Carney noted this morning, “[t]hat might confirm for Trump and for millions of his supporters that this virus is nothing to worry about. A bunch of people hung out in close contact, without masks, and they got a cold? And we’re shutting down the economy over this?!” Exactly. The proper lesson from Trump’s infection is that even the most well-protected person in the world, whose close contacts are (supposedly) being tested every day before meeting him, isn’t safe from infection. Trump being Trump, he’ll probably want to get back on the trail sooner than the two weeks recommended for quarantine if he’s feeling better, supposedly to prove how tough he is. Which will lead to cheers from the 45 percent of the country that’s MAGA and sad head-shakes from the other 55 percent that he’s still not listening to doctors about how to keep the people around him safe.

No one should need a “message” from a case of a 74-year-old beating the virus at this point. We know statistically that nearly all of them do. But they’re not quite as safe as younger age cohorts are, and there’s no way to tell how debilitated a given COVID patient might be after overcoming the disease. Trump could have heart problems, neurological problems, blood-clotting issues, and respiratory issues. Hopefully he ends up fully back to normal, but after 200,000 deaths, anyone who’s still dismissing the virus as “just a flu” — a conclusion Trump himself privately rejected months ago — is going to find some reason or other to justify that conclusion. Trump’s recovery will be just the latest pretext.

Oreo Insulted Its Customers In An Attempt to Get Woke Points, but There's a Larger Problem

'Are you kidding?' Real Journalists™ white-knight for Joe Biden after 'George'-gate and do him — and themselves — zero favors

“‘Kill the Nazi!’ someone screamed.”