Obama: Hey Georgia, do me a solid and elect Michelle Nunn

After President Obama compounded his ‘every single one of my policies are on the ballot’ assertion by praising vulnerable Congressional Democrats as staunch water-carriers for his agenda, I joked that the only way he could assist Republican ad makers any further would be to call out each Democrat by name. And that’s precisely what he’s now done in Georgia, where Michelle Nunn has been impersonating Gumby to avoid being linked too closely with the unpopular president.  Over to you, champ — via America Rising:

Occasionally, the man speaks the truth.  Barack Obama needs Michelle Nunn to help protect Harry Reid’s majority and all of their famously superb work.  It’s a simple equation, Georgians: Obama + Nunn = More Obama policies.  The Nunn folks were probably hoping no one would hear this explicit endorsement beyond its narrow intended audience, which happens to be the same voting bloc Georgia Democrats are currently targeting with this abomination.  The state’s broader electorate may not be quite as excited over the prospect of Nunn providing needed reinforcements to Barack Obama in Washington. The One’s job approval rating in the state is underwater by 19 points (39/58), according to the New York Times polling series we highlighted a few weeks back, and Mitt Romney carried Georgia by eight percentage points in 2012.  National and local Republicans are already swarming all over this quote, with an NRSC official dubbing it an accidental “closing argument” for Republican David Perdue.  The Perdue campaign has been relentlessly tying Nunn to Obama, but now the president has gallantly stepped in and done so himself.  For what it’s worth, it appears that Perdue is actually in need of some closing help.  Despite Obama’s unpopularity in the state (and her own campaign’s leaked, brutal assessment of her flaws — seriously, click and read), Nunn has nudged ahead by a whisker in the RCP polling average — with both major party candidates well below the 50 percent-plus-one threshold needed to avoid a January run-off.  How has she managed that?  First, she’s kept Obama at arm’s length and doesn’t have any voting record that can shatter the illusion of independence.  Second, David Perdue has never quite found his stride after winning a hard-fought primary run-off.  Third, Nunn keeps burnishing her “moderate” credentials by implying that former President George H.W. Bush supports her, ignoring his repeated requests to stop doing so.  And fourth, like Alison Lundergan Grimes in Kentucky, she has a famous family name in the state.

Is Obama right that a Nunn victory would guarantee Reid’s Democratic majority hangs on to power?  Not necessarily.  It’s undeniably true that if the Democrats flip a red state into the blue column (the top prospects being GA, KS, and KY, the latter two of which Obama lost by more than 20 points), their power protection lift gets significantly lighter.  But if — if — Republicans carry every seat in which their nominees currently lead in the polls (AR, AK, CO, IA, LA, MT, SD, WV), they could *technically* withstand losses in two of those three aforementioned races and still emerge with a 51-49 edge.  I stressed ‘technically’ because let’s be honest: If Democrats pick off a pair of GOP-held seats in McCain/Romney turf this fall, the likelihood of Team Red sweeping the other eight races feels remote.  Remember, the only contests Republicans appear to have secured at this juncture are in West Virginia and Montana, plus (probably) South Dakota and Arkansas.  Begich and Landrieu are definitely down, but they aren’t quite out; and while things are looking up in both Colorado and Iowa, those are still states carried twice by Obama where Democratic nominees are within striking distance.  (On the other side of that coin, the same standard also applies to Thom Tillis and Scott Brown in North Carolina and New Hampshire, respectively).  The point is that Republicans have multiple paths to get to (+6), so a Nunn victory wouldn’t single-handedly derail the GOP Majority Express.  But it’d make those paths a lot narrower, and would likely indicate that 2014 did not turn out to be the big wave year Republicans were hoping for.  One of the ingredients for said wave is less than stellar turnout among African-Americans — which is why Obama made his appeal on that Atlanta radio station, and why his party is invoking Ferguson in this race, and why Wendy Davis is talking about interracial marriage in Texas, and why these heinous fliers are showing up in North Carolina, and why Maryland (!) Democrats apparently feel compelled to invoke Jim Crow to seal the deal for their gubernatorial ticket: 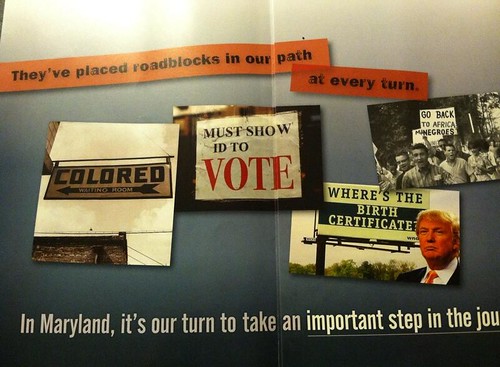 As despicable as it is predictable. Fun fact: Obama rallied a thinning crowd in that very same Maryland race just last weekend, delivering a speech that angrily denounced Republican fear-peddling.  One more, for the road: Voter ID laws, which the mailer above lumps in with segregation, are supported by a majority of black voters.

Oh No, Some Leftist Jerks Called Me a 'Hypocrite'
Townhall
Matthew Foldi does the Walker-obsessed MSM's job for them and airs out Raphael Warnock's own truckload of dirty laundry
Twitchy
Biden Drops a Whopper About DeSantis and a Mafia-Like Comment That Has People Talking
Redstate
5 Years After Las Vegas Concert Shooting, an FBI Whistleblower Reveals Probable Motive
PJ Media