Democratic moderate to AOC: She’s ‘advocating policies that are unworkable and extremely unpopular’ 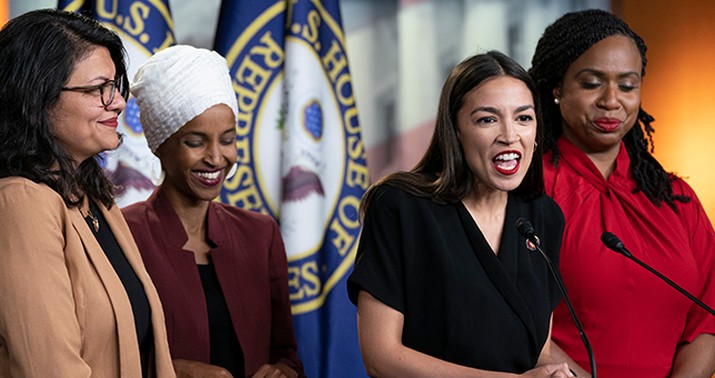 Consider this a companion piece to the one Jazz wrote earlier today. AOC is doing her best to deny that far left policies she and the Squad have advocated are responsible for Democrats’ disappointing outcome in the House. As I pointed out here, Democrats were predicted to pick up 10-15 House seats this election. Instead, Republicans have picked up 5 seats and could add more to that total when all is said and done. It won’t be enough for the GOP to take control of the House but it could set them up to do so in 2022.

So in the wake of this disaster, some Democrats are pointing to AOC and policies embraced by the Squad as the source of the problem. Yesterday, Democratic moderate Conor Lamb from Pennsylvania gave an interview to the NY Times in which he did something few Democrats have been willing to do: Talk back to AOC.

What went wrong for House Democrats when they were supposed to pick up seats?

I’m giving you an honest account of what I’m hearing from my own constituents, which is that they are extremely frustrated by the message of defunding the police and banning fracking. And I, as a Democrat, am just as frustrated. Because those things aren’t just unpopular, they’re completely unrealistic, and they aren’t going to happen. And they amount to false promises by the people that call for them.

If someone in your family makes their living in some way connected to natural gas, whether on the pipeline itself, or you know, even in a restaurant that serves natural gas workers, this isn’t something to joke around about or be casual about in your language.

That’s what we’re trying to say: that the rhetoric and the policies and all that stuff — it has gone way too far. It needs to be dialed back. It needs to be rooted in common sense, in reality, and yes, politics. Because we need districts like mine to stay in the majority and get something done for the people that we care about the most.

Asked if the problem was the Squad, Lamb tried to walk a fine line, repudiating their policy stances without making the criticism personal:

Is it the view of moderate Democrats that the progressives or the so-called Squad has taken up too much space in the national conversation?

I wouldn’t put it that way. Because that really focuses on them as individuals and their personalities. And that is not what we’re trying to do. We’re trying to have a discussion about policy, not personality. And I want to be really clear on that, because I respect every one of those members and how hard they worked to get elected and how hard they have worked to stay elected and represent their constituencies. But the fact is that they and others are advocating policies that are unworkable and extremely unpopular.

Specifically, he went on to say that AOC’s stance on fracking wasn’t helpful to him:

I got to say, as you’ve talked a lot about Representative Ocasio-Cortez, she can put her name behind stuff and that’s I guess courageous, but when it’s a damaging idea or bad policy, like her tweeting out that fracking is bad in the middle of a presidential debate when we’re trying to win western Pennsylvania — that’s not being anything like a team player. And it’s honestly giving a false and ineffective promise to people that makes it very difficult to win the areas where President Trump is most popular in campaigns.

If you’re wondering where some of this tension is coming from, it’s coming not just from AOC’s Twitter feed but directly from something she said when she was interviewed by the same NY Times reporter on Saturday. She attacked Conor Lamb by name and accused him of running a bad campaign:

Some of this is criminal. It’s malpractice. Conor Lamb spent $2,000 on Facebook the week before the election. I don’t think anybody who is not on the internet in a real way in the Year of our Lord 2020 and loses an election can blame anyone else when you’re not even really on the internet.

Lamb didn’t lose his election. He won it, though it was a very tight race. There is still some of the vote left to be counted but with 95% reporting he won the race by just under 9,000 votes. Lamb responded directly to AOC’s attack on his campaign:

She doesn’t have any idea how we ran our campaign, or what we spent, to be honest with you. So yeah, her statement was wrong. But there’s a deeper truth there, which is this — that our districts and our campaigns are extremely different. You know, I just leave it at that.

Again, Lamb is being a lot more polite in his responses than AOC was in her initial attacks, but don’t miss what he’s saying here. AOC’s brand of far left politics might work in New York City but she wouldn’t stand a chance if she ran in his district and spending a lot of Facebook ads wouldn’t save her.

That’s a lesson AOC seems unable or unwilling to grasp. She’s been putting money into progressive campaigns looking to defeat moderate Democrats. A few of those candidates might win but, as we saw this cycle, the danger is that a far left Democratic Party continues to shrink until Democrats lose the House. That’s a very real possibility two years from now. The party that controls the White House often loses seats in the midterm elections. I guess we’ll see how willing AOC and the Squad are to compromise over the next two years.