Bad news for Nancy: Contrary to expectations, Republicans have gained seats in the House (Update: ‘It’s a dumpster fire’ plus talk of ditching Pelosi) 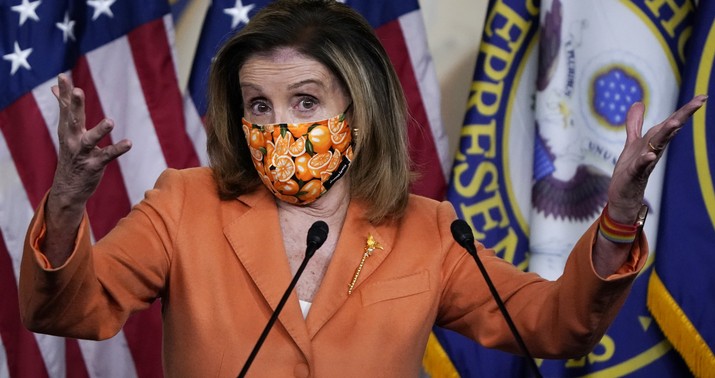 The House races haven’t gotten as much attention as the Senate but it appears Republicans have done very well. Prior to yesterday, some forecasts said Democrats were likely to pick up as many as 10-15 additional seats, with an outside chance of +20 for Dems. This is Cook Political Report’s final rating:

We now view a Democratic net gain of 10 to 15 seats as the likeliest outcome, with anything from five to 20 seats well within the realm of possibility…

In our final House ratings, we’re shifting eight more races in Democrats’ direction, including three in the high-turnout Lone Star state. If the 27 races in our Toss Up column were to split evenly down the middle, Democrats would net nine or ten seats.

Like a lot of other predictions that one doesn’t appear to be particularly accurate. At present the NY Times’ House results map shows the GOP with a net gain of five seats in the House. That comes from 7 seats the GOP flipped compared to 2 the Democrats have flipped. The Associated Press has more on the Dems who lost:

After decades of trying, Republicans defeated 15-term Rep. Collin Peterson from a rural Minnesota district that backed President Donald Trump in 2016 by 31 percentage points, Trump’s biggest margin in any Democratic-held district. Peterson, who chairs the House Agriculture Committee, opposed Trump’s impeachment and is one of the House’s most conservative Democrats. He was defeated by Republican Michelle Fischbach, the former lieutenant governor.

The fight for Torres Small’s seat cost around $35 million, making it one of the country’s most expensive races, according to the nonpartisan Center for Responsive Politics. She was defeated by Yvette Herrell, a former state legislator.

Races that haven’t been called

There are still 55 seats that haven’t been called but at the moment the NY Times reports the GOP is leading in 31 of those races. In some cases there is still a lot of outstanding vote to be counted so I don’t think the GOP will hold all of those seats but if they did the GOP would wind up with 216 seats, two shy of controlling the House.

At present the GOP looks likely to win all of the seats in the two columns on the right. In the center tossup column there were 27 seats. The GOP has already won 13 of those and leads in 11 more. And in the column (2nd from the left) of races where Democrats were expected to win narrowly, the GOP has already claimed 4 seats and is leading in 10 more races (some of those very narrowly). Here’s the tossup column as I write this:

Again, I don’t assume the GOP is going to hold all of the seats where they are currently leading but the chances of Democrats making up for the net loss of five is looking pretty slim and there’s at least some chance the Democrats’ majority in the House could turn out to be very thin.

That would be very bad news for Nancy Pelosi. As the AP points out, a narrow majority could make for a bumpy ride:

A smaller Democratic majority would make it tougher for House Speaker Nancy Pelosi, D-Calif., to unite her lawmakers as a handful of progressive freshmen arrive for the new Congress.

In particular, guess who is back:

The dynamic group of women of color have been reelected for second terms in the House of Representatives.https://t.co/PeloCn7goO

Nancy has already had a tough time dealing with her energetic left flank. Now she’s going to have less of a moderate cushion. She may actually need the Squad to get anything passed which means AOC could play a bigger role in shaping what comes out of the House. But if this happens it may not last for long because 2022 is expected to be a tougher cycle for Dems.

Update: Politico has published a story on the House Dems no good, very bad night.

House Democrats are asking themselves one question after Tuesday’s election stunner: What the hell happened?

In the House, bleary-eyed Democrats were still sorting out the wreckage when they awoke Wednesday with dozens of their members’ races still uncalled and not a single GOP incumbent ousted — an outcome that virtually no one in the party had predicted in a year in which Democrats were going on the offense deep in Trump country.

Even with tens of thousands of ballots still to be counted, shell-shocked Democratic lawmakers, strategists and aides privately began trying to pin the blame: The unreliable polls. The GOP’s law-and-order message amid a summer of unrest. The “hidden Trump voters.” The impeachment hangover. The lack of a coronavirus stimulus deal…

Some Democrats were privately more blunt: “It’s a dumpster fire,” said one lawmaker, who declined to be named…

None of the roughly dozen Democratic lawmakers or aides interviewed said Pelosi should step down or would face a challenger. But several of them privately speculated that what was just days ago expected to be a glide path to the speakership will be more difficult as Democrats lose seats in the House.

That’s what they’re saying now but if the GOP winds up picking up more seats, which is still possible, Pelosi’s path forward may become very rocky indeed.

Stung by their party’s disappointing showing at the polls Tuesday, two moderate House Democrats say they and other centrists are privately discussing a plan that was unthinkable just 24 hours earlier: throwing their support behind a challenger to Speaker Nancy Pelosi (D-Calif.)…

One of the two lawmakers who spoke to The Hill said a number of Democrats representing suburban and exurban districts had been talking about the need for a change.

“It’s time for Democrats to elevate a new generation of leadership in both the House and the Senate,” the lawmaker said. “Americans are clearly afraid of ‘socialism,’ want safe streets and neighborhoods and to vote for people who they believe will help put more money in their pockets. While Democratic policies can adequately address those issues, our messaging mechanism clearly cannot.”

They are calling themselves “suburban survivors.” That’s got to hurt.

There It Is: Pelosi Snaps at Reporters, Makes Stunning Admission About Why She Stalled Virus Relief Bill