Seven: Has Brady become the greatest team-sport athlete of all time? 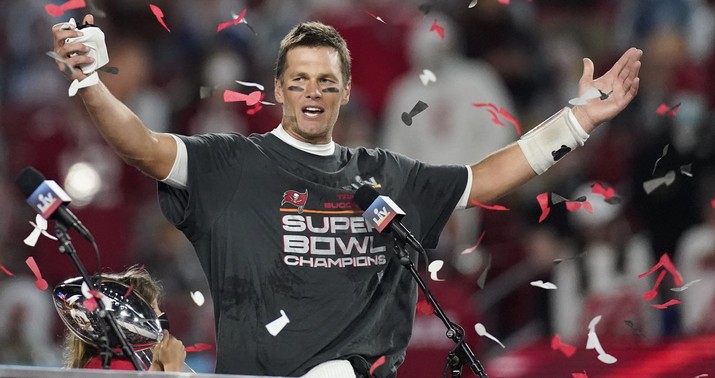 Who was that (un)masked man? Tom Brady cemented his status as the greatest NFL quarterback last night by claiming his seventh ring in the 31-9 win by the Tampa Bay Buccaneers over the Kansas City Chiefs. It puts to rest the idea that Brady was dependent on Bill Belichick, and opens up a new debate even as Brady insists he’s still not finished. Is he the GOAT not just as an NFL QB, but in all of team sports?

For Brady, this was something similar but different, all at the same time. He won his seventh Super Bowl title in 10 tries. He was the MVP for the fifth time. Both are NFL records.

But all of those previous Super Bowl victories and MVP honors came with the Patriots. This one came after one season with the Buccaneers, and he’s the oldest player to ever play in a Super Bowl, let alone win one. He’s also the first quarterback to win a Super Bowl in his home stadium. It was another amazing feat in an amazing career for Brady, who is deserving of being called the GOAT.

He’s now won a Super Bowl title in three different decades. And he’s now proven he can win a championship without Bill Belichick.

“It’s hard to do what he did,” Mike Evans said. “To come without an offseason, learn a new system as a quarterback — the hardest position in all of team sports — and to just pick it up like he’s been running this offense for a long time. Obviously, we got better as the year went on, but man, Tom’s the GOAT for a reason. He played great all year. We needed him to do that, and we got the goal that we were aiming for.”

CBS Sports analyst Jamey Eisenberg asked the obvious question, one that had arisen almost as soon as Brady went into victory formation with 1:30 left in the game:

The conversation surrounding Brady now goes from greatest football player of all time to possibly the greatest athlete of all time. He now has one more championship than Michael Jordan, and Brady will be compared to other great athletes in other sports throughout history.

Actually, Brady may have the edge on Jordan in another way. Jordan won all of his championships within a single decade (between 1991 and 1998), and finished up playing in 20 seasons. Brady won his latest championship in his 21st season and third decade in a sport that takes a bigger toll on its players, and he’s still performing at or near the top of his game. That’s no knock on Jordan, who dominated the NBA when he played, but Brady has both more championships and more longevity.

Who else might compete? Twitter followers suggested members of the classic Yankees teams from the 1940s-1960s, such as Joe DiMaggio and Yogi Berra. DiMaggio was part of nine World Series championship teams and also in three different decades (like Brady), but center fielders aren’t considered generals on the field as quarterbacks are. One bonus for DiMaggio’s consideration is the three seasons he missed at the peak of his game to serve in combat during World War II; he could have added championships during that period otherwise.

Berra might have a better claim, both in terms of longevity as a catcher and in terms of championships.  Berra was part of thirteen championship teams — ten as a player (all with the Yankees) across three decades, and three as coach (Mets and Yankees). Catchers are undeniably field generals, even if pitchers get the won/loss credit, and the position is notoriously tough on bodies. Yet Berra played the position in 19 seasons of major-league baseball, almost but not quite as many as Brady — and didn’t exactly finish up at the top of his game either, although good enough to win championships in seasons 15 and 16.

There are others with as much or more longevity in major-league team sports — Gordie Howe comes to mind in hockey — but not with this kind of dominance across three decades. If one expands from greatest team-sports athlete to greatest athlete overall, we could find some competition in golf and tennis. Those sports don’t have season-championship finals, though, which makes comparison difficult even if one overlooks the very different athletic requirements between the three sports.

Unless other contenders come to mind, it looks like the contest is between Brady and Berra. And if Brady adds any more to his record by making another Super Bowl appearance as a starting QB, he’s likely competing more against his own legend.

Update: How could I forget Bill Russell?

I think the longevity argument transcends the number of championships, but it’s a close call. Brady’s made it to ten Super Bowls, after all, and he may not yet be done.

These Republicans Voted for the Radical Equality Act