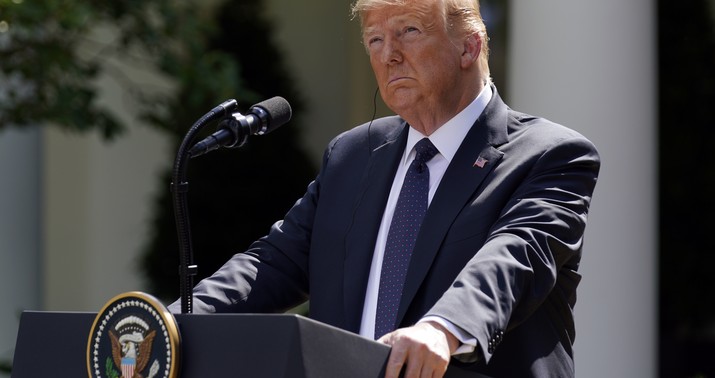 Did Russia pay bounties to the Taliban to kill American soldiers? It certainly sounds plausible, especially when considering Russian feelings over the US efforts to eject them from Afghanistan in the 1980s. Ever since the New York Times dropped the bombshell, people have attacked Donald Trump for not protecting troops and for making nice with Vladimir Putin. Joe Biden used it to attack Trump over the weekend.

As Allahpundit noted yesterday, however, both the current Director of National Intelligence and his acting predecessor denied that Trump had ever been briefed on that intelligence. The National Security Council never included that intel in its presidential daily briefings either, one NSC source told Catherine Herridge, although they were trying to find out for sure why not.  Late last night, Trump blasted the media’s reports on the matter, calling it “another fabricated Russia hoax.” The real story is that he never got briefed because the intel analysts “did not find this info credible,” Trump tweeted:

Intel just reported to me that they did not find this info credible, and therefore did not report it to me or @VP. Possibly another fabricated Russia Hoax, maybe by the Fake News @nytimesbooks, wanting to make Republicans look bad!!! https://t.co/cowOmP7T1S

So is there evidence of this, or not? NBC updates the story with a contradictory report on that issue:

The U.S. has gathered intelligence that Russian intelligence officers have offered to pay bounties to Taliban fighters who kill Americans, three people briefed on the matter told NBC News.

The intelligence has been shared with congressional leaders and with the British government, the sources said. However, a senior defense official downplayed the intelligence reporting, saying there was no evidence that any bounty was actually paid.

Supposedly, this intel was gleaned from interviews of Taliban detainees. As NBC notes, that wouldn’t have been enough to make the story credible. As such, it might have been an interesting thread to pull, as it would indicate that Russia might be getting a little revenge for its humiliation a generation ago in Afghanistan at the covert hands of the US. But rumors from detainees don’t go all the way up to a PDB unless there is solid corroboration — and so far, it doesn’t look like anything except a rumor.

That doesn’t make it not true or a “fabricated Russia hoax” either, but it does explain why it didn’t make it to the NSC or the president. The purpose of intelligence gathering is to make sure leaders are properly informed of facts rather than respond to rumors. Wars get started in that fashion, and protecting against that is as important as making sure we don’t get caught by surprise by an attack. And in this case, the rumors don’t make a lot of sense anyway, as Paul Mirengoff points out:

But even if offering bounties might marginally increased the number of Americans killed by terrorists, would the risk to Russia if the bounties were exposed outweigh that potential reward? Probably not.

It seems at least as likely that the intelligence community considered the question without reaching a firm conclusion that Russia offered bounties. If so, it makes sense that it didn’t brief the president.

What this looks like at the moment is a leak of the rumors and spin on them to make them look like conclusions to make Trump look bad. The intelligence community is no stranger to politics, and no stranger to this technique either. At this time, they have a national media champing at the bit for spoon-fed narratives that fit their anti-Trump editorial positions. As Allahpundit wrote yesterday, this looks much more like an intelligence and media scandal than it does a Trump administration scandal, and one more piece of evidence that American intelligence has become so politicized that it might no longer be reliable.