Trump: I was never briefed on Russia placing bounties on our troops with Afghan jihadis; Update: Not in PDB? 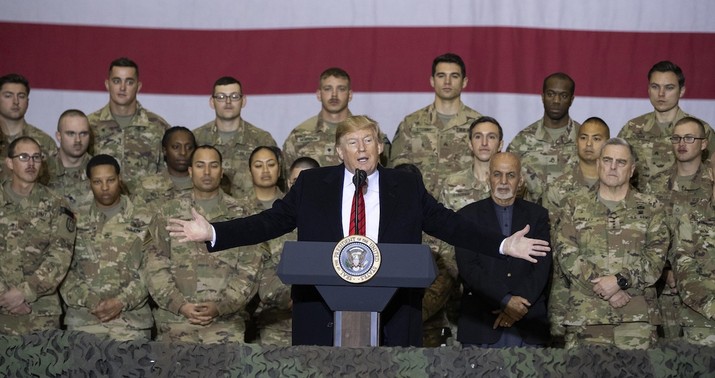 For the moment, there are two key questions. Did U.S. intelligence in fact conclude that Russia’s been paying jihadis in Afghanistan to kill American soldiers? And did Trump know about it?

There’s plenty of media smoke signaling that the answer to the first question is yes. The Times got to the story first on Friday, citing “officials briefed on the matter,” but since then it’s been independently confirmed by the Washington Post (citing “officials”), the Wall Street Journal (“people familiar with the report”), ABC (“a military official”), and CNN — whose source is a “European intelligence official,” notably. They all tell the same basic story, which is that U.S. intelligence arrived at this conclusion sometime this spring. The Times and WaPo specify that some sort of “interagency meeting” on the subject was held in late March.

Did Trump know about it? The only one of the five outlets linked above claiming that he was briefed is the Times. The new head of national intelligence, John Ratcliffe, denied that in a statement last night (“neither the President nor the Vice President were ever briefed on any intelligence”). Kayleigh McEnany also denied it on behalf of the White House:

.⁦@PressSec⁩: “neither the President nor the Vice President were briefed on the alleged Russian bounty intelligence.” pic.twitter.com/fcQSDWfc5U

Notably, neither Ratcliffe nor McEnany denied that the intelligence on Russia paying bounties for U.S. troops is accurate. Ratcliffe’s predecessor as DNI, Ric Grenell, did deny it — sort of. He said he never heard of such a thing when he was in office, which isn’t exactly the same as insisting that the intel doesn’t exist:

I never heard this. And it’s disgusting how you continue to politicize intelligence. You clearly don’t understand how raw intel gets verified. Leaks of partial information to reporters from anonymous sources is dangerous because people like you manipulate it for political gain. https://t.co/403X9AVGAC

Trump himself chimed in this morning and called it “fake news,” although again, the “fake” appears to relate to whether he had been briefed on the intelligence, not necessarily whether the intelligence exists:

…Nobody’s been tougher on Russia than the Trump Administration. With Corrupt Joe Biden & Obama, Russia had a field day, taking over important parts of Ukraine – Where’s Hunter? Probably just another phony Times hit job, just like their failed Russia Hoax. Who is their “source”?

Some Trump critics on social media have keyed in on the word “briefed.” Are semantic games being played here, in which maybe Trump was told what Russia was doing but never had a full briefing devoted to it? Or was the information maybe included in written form in the President’s Daily Brief (PDB) and he didn’t see it because, uh, he doesn’t read his briefing books?

Another said it was included in the President’s Daily Brief, a written document which draws from spy work to make analytic predictions about longstanding adversaries, unfolding plots and emerging crises around the world.

Or was the intelligence actually withheld from him by his own deputies?

You see what I mean now about three possible scandals. If the Times is wrong about Trump being briefed (or about whether the intelligence exists), it’s a media scandal. If White House aides knew about Russia paying bounties but didn’t brief the president immediately, knowing how that information might (or rather, should) alter U.S. policy towards Russia, it’s an intelligence community scandal. If Trump is lying about not being briefed and decided to pressure the G7 to invite Russia to its next summit even after he learned that they were targeting American troops, it’s a Trump scandal. Which is it?

A passage from the Journal worth noting:

The intelligence assessment regarding Russia’s actions in Afghanistan was delivered to the White House earlier this spring, and until recently had been known only to a handful of officials, a person familiar with it said.

I’m not sure how to square that with the reports of an interagency meeting about it months ago. If in fact the information was closely held, that would make it more likely that Trump’s telling the truth about not having been briefed — although it wouldn’t explain why he wasn’t. He’s the head of the executive branch, the senior-most “senior official.” Withholding info like that from him would not only leave him flying blind in setting foreign policy, it would risk enormous political damage to him if/when it leaked. Biden’s killing him over it already:

“The truly shocking revelation that if the Times report is true, and I emphasize that again, is that President Trump, the commander in chief of American troops serving in a dangerous theater of war, has known about this for months, according to the Times, and done worse than nothing,” Biden, the presumptive Democratic nominee, said during a virtual town hall…

Biden called it a “betrayal of the most sacred duty we bear as a nation — to protect and equip our troops when we send them into harm’s way.”

He said Americans who serve in the military put their life on the line. “But they should never, never, never ever face a threat like this with their commander in chief turning a blind eye to a foreign power putting a bounty on their heads,” he said.

Everyone who was supposed to brief Trump and didn’t should be fired immediately — assuming, that is, that he really wasn’t briefed. ABC’s source emphasized that he “didn’t know whether Trump was briefed but said other senior U.S. officials learned of the Russian operation ‘months ago.'” In all that time, no one mentioned it to the president?

We’ll see if there are any firings this week.

In the meantime, Trump allies and enemies are asking similar questions:

If reporting about Russian bounties on US forces is true, the White House must explain:
1. Why weren’t the president or vice president briefed? Was the info in the PDB?
2. Who did know and when?
3. What has been done in response to protect our forces & hold Putin accountable?

There are only 3 possibilities here: It was in the PDB or briefed to him but he didn’t bother to read or listen; the NSC/CIA deliberately kept it from him; or he knew and didn’t care because he wants to have a “good relationship” with a murderous autocrat.

Normally it’d be unthinkable for the intelligence community to hold back information from the commander-in-chief, especially info as explosive as a Russian bounty on American troops, but that possibility has been raised before. In the first weeks of Trump’s presidency, with suspicions about Trump and Russia raging, the WSJ dropped a bombshell alleging that “sensitive intelligence” was being withheld from Trump for fear that it might be “leaked or compromised.” In particular, “In some of these cases of withheld information, officials have decided not to show Mr. Trump the sources and methods that the intelligence agencies use to collect information, the current and former officials said.” A few months later, those concerns proved to be well-founded. Did U.S. intelligence hide the “Russian bounty” info from him because they thought he might end up letting slip some key detail about how we came to discover it in his chats with Putin?

Stay tuned. Here’s John Bolton being asked about the story this morning, exercising caution but stressing that Trump’s reaction on Twitter was predictable. He didn’t erupt in outrage at the Russians or vow revenge or even seem indignant that his deputies hadn’t briefed him as soon as they knew about the bounties. His instinct was simply to disclaim responsibility. We’re probably only a day or two away from him saying that Putin told him it isn’t true and that’s good enough for him.

John Bolton reacts to Pres. Trump's denial he was briefed on Russia offering bounties to kill coalition forces: "This is part of the problem with President Trump's decision-making in the national security space. It is just unconnected to the reality he's dealing with" #CNNSOTU pic.twitter.com/ZNvPtWOi4h

Update: If Catherine Herridge’s sources are right, this is a media scandal and an intelligence community scandal.

DEVELOPING: A senior intel official tells @CBSNews the GRU/Taliban bounty allegations were not contained in the President's Daily Brief (PDB) which is the highly classified, daily summary of national security issues delivered to the President, key cabinet secretaries + advisers..

talks with the Taliban, intel about a GRU operation involving the Taliban, targeting US forces would have risen to the level of inclusion in the PDB. @CBSNews

Why wasn’t the president briefed sooner? Who’s getting fired?

Joe Rogan: ‘Defund the police’ is a silly, utopian mantra

“All this defunding the police talk scares the s**t out of me.”