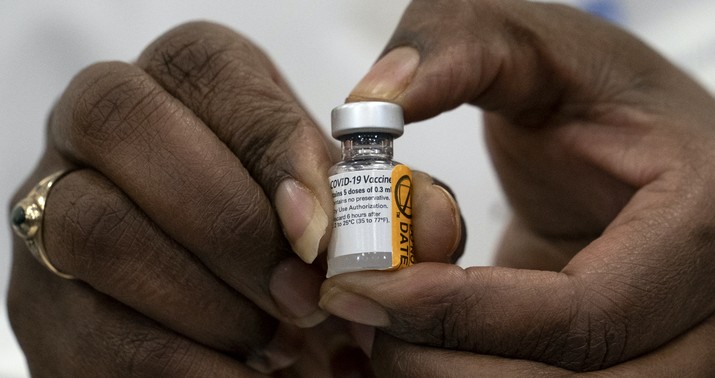 A disturbing story, but it’s not like we’re actually using most of the doses that have been distributed so far, right?

In fact, with the new year just hours away, I wonder how soon it’ll be before it feels quaint that we were worried at one point this month about facing a potential shortage of the vaccine this spring. That was a 2020 problem; the 2021 problem may be “Do Pfizer and Moderna have enough capacity to store the giant backlog of doses they’ve made as the vaccination process proceeds at a snail’s pace?”

I haven’t seen any reports of a motive in this case yet, but I sure am curious.

The person responsible, whom it did not name, is no longer an employee, the hospital system said in its statement. It was not clear whether any charges had been brought. The police department said it could not comment further on an active investigation…

Aurora said it learned of the incident earlier this week and was originally led to believe that the spoilage was accidental. But on Wednesday, it said, the employee acknowledged intentionally removing the vials of vaccine from refrigeration.

The FBI, FDA, and local cops are investigating. According to the Milwaukee Journal-Sentinel, the now-fired worker removed 57 vials of the Moderna vaccine from a refrigerator, each vial containing 10 doses. The contents of the vials are stable at room temperature for up to 12 hours, which allowed the hospital to successfully harvest and administer some doses from the vials before they spoiled. Unfortunately, most were lost. Presumably the culprit was an anti-vaxxer of some stripe but whether his skepticism had to do with the COVID vaccine specifically or vaccines generally remains unknown for now.

Last night I saw some chatter on social media for the first time about dispensing with the priority system for different demographics and just dosing out the vaccine to everyone who wants it. In one sense, that proposal is outrageous: How dare anyone suggest that seniors shouldn’t go to the front of the line knowing what we know about the special risk of death they face from COVID? But the slower the vaccination process is, the further away herd immunity gets, and that’s a dangerous development given the state of the pandemic right now:

The fact that the more transmissible British variant of the virus is already here and spreading makes rapid vaccination of the population that much more pressing:

The news [of the variant in California and Colorado] ramps up the urgency to get Americans vaccinated because it raises the threshold for so-called herd immunity — the percentage of people who must be inoculated to contain the threat. That threshold may be 90 percent now, versus the 70 percent experts previously estimated.

At least two million Americans must be vaccinated each week to prevent the health care system from buckling even under the current surge, experts estimate, let alone an increase brought on by the new variant…

[W]ith every new person it infects, the coronavirus also has more chances to mutate, and therefore more chances to happen upon mutations that give it an advantage — by making it more transmissible, for example, or less susceptible to the immune system.

The more Americans are vaccinated, regardless of age, the more protected seniors as a group will be by the incremental onset of herd immunity. *If* it’s true that ending prioritization among different groups will lead to much faster herd immunity than maybe it’s in seniors’ aggregate interest to shift to a first-come-first-served system for everyone. Or to some sort of hybrid system:

Give vaccines first-come first-serve, with one line for people with mostly gray hair and one for everyone else. Clear the shelves every day, even if it means driving around in vaccination trucks. Not a great system, but it can’t be worse than the one we have pic.twitter.com/eCCCZDSs2g

Presumably Wood’s imagining that all of the gray-haired people in line go first and then, if there’s anything left over, the younger people start getting dosed. A younger person who waited in line all day for a chance at a dose and didn’t get one probably wouldn’t be willing to risk that again, but that’d be a nice problem to have as it would mean demand among seniors was clearing the shelves.

At a minimum, all states should allow seniors to start getting vaccinated right now instead of waiting for medical personnel and nursing-home residents to get both of their shots. It’s insanity to have doses sitting in freezers at a moment when public demand is strong and the need for rapid herd immunity is urgent.

Just talked to a pharmacist in the panhandle who’s currently watching 30 doses of the vaccine go bad because they can’t find enough “eligible” recipients. We had a year to figure this out

While that would be significant progress, it's worth noting that the current vaccines require two doses and we'd actually need a faster pace than that (~1.5m/month) to keep up with all the Pfizer and Moderna vaccine that is scheduled to be delivered by July. https://t.co/ZEQyEBPFT1

The existing supply is on the clock. “Though refrigeration capacity varies from location to location, vaccines are only cleared for 30 days of storage in the most common units (including those in which they have been shipped),” notes New York magazine. “States have been rushing to build out their storage capacity, but have been warned of monthslong waits for ultracold freezers that could extend shelf life to about six months. That means that, in many places, this first batch of vaccine is set to expire in late January, around the time Joe Biden, who has been criticizing the rollout and promising to accelerate it, is set to take office.” Spare a moment amid the outrage about the case of vaccine sabotage in Wisconsin to ponder the prospect of hospitals having to throw out vials a month from now because the doses expired before they could all be given out.

Why are things taking so long? One problem that’ll be solved shortly is that it’s the holiday season and there are fewer staff on duty to administer shots. That changes Monday. A more challenging problem is a mismatch between supply and demand in some places:

Georgia Governor Brian Kemp: "We have more people that want to get vaccinated in the metro areas than we have vaccine, and it's completely the reverse of that in parts of rural Georgia — the demand is not there." #gapol

Roughly 20% to 40% of the L.A. County’s front-line workers who were offered the vaccine declined to get the shot.

So many in Riverside County refused the vaccine — an estimated 50% — that officials met to strategize how best to distribute the unused doses https://t.co/yDtTh6ccq2

Another is the foolish decision to reserve half the doses already distributed so that people who’ve gotten their first shot can get their second within three or four weeks. “A group modeling the Canadian rollout suggested that rushing to get as many first doses as possible out, and waiting for new supply to deliver second doses, could avert as many as 34 to 42 percent of new infections, which is why Canada has now embraced that approach — as has the U.K.,” New York magazine reports. Some of the people in Georgia’s cities who are eager to get the shot could presumably be vaccinated right now if the policy of holding doses back was lifted.

The deeper problem, though, is that the federal government and state governments are dysfunctional and each left it to the other to take charge of the vaccination process. It wasn’t until the COVID relief package was signed a few days ago that states got the money they were seeking to build out a vaccination infrastructure. The feds could have tried building that infrastructure themselves as part of Operation Warp Speed or they could have cut a check to the states several months ago to make sure they hit the ground running when the vaccine finally arrived. Or, of course, the states themselves could have tightened their belts the tiniest little bit to free up funds for the upcoming vaccination effort. Instead each side assumed the other would act. In the end the vaccine dropped in states’ laps in mid-December with no delivery mechanism awaiting it. The effort is momentarily so chaotic that even if we tossed out the prioritization scheme and told every American to go get the shot if they want it, many of us would have no idea where to go. There’s no information clearinghouse on the vaccination process. E.g.:

UPDATE: Hundreds of seniors camped out overnight again, in the cold, crowded together, in Lee County last night, waiting for vaccinations.

As of 6:30 a.m. today (Wednesday) all three vaccination sites in Lee County, Florida have hit capacity, according to DOH-Lee.

If I were told today that I’m eligible to get the shot, my first thought would be to check the CVS and Walgreens websites for information and, if that produced no info, to just start googling randomly about vaccinations in my community. Even if I found a place giving out shots, I’d have no idea what sort of wait time there’d be and therefore whether it’s even worth the trouble to make the trip. Imagine confronting that same problem if you’re a senior citizen or frontline worker who’s not particularly Internet savvy. “How will these people be scheduled for their vaccination appointments? How will they provide documentation that they have a medical condition or a job that makes them eligible to get vaccinated? And how will pharmacies ensure that people show up, and that they can do so safely?” asked the Times about the process. Good questions all, as is this: Even if we opened up the vaccination process to everyone in the interest of speeding this up, do we have the manpower to meet demand? Who’s going to administer the shots to keep those long lines moving when doctors and nurses are momentarily consumed with treating sick COVID patients and will be for several more months?

I’ll leave you with this libertarian take, which sums up the situation well enough. CVS and Walgreens are probably our only hope here.

'Where does that leave new parents?' Popular baby sleep expert found to have donated to Trump campaign