Frustrated experts: This vaccination process sure is off to a slow start 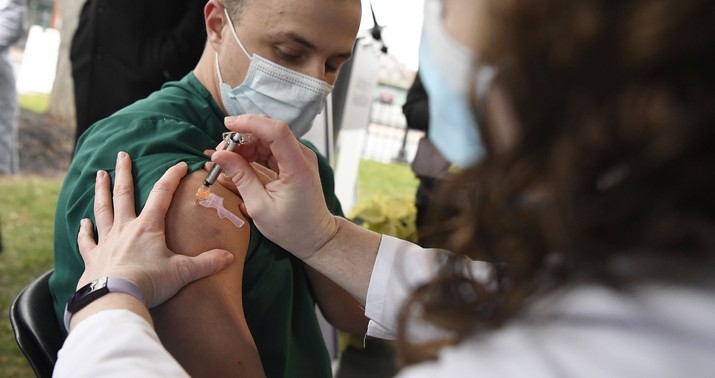 Last week was the week for people like me who don’t know what they’re talking about to worry about this.

This week is the week for people who *do* know what they’re talking about to worry.

The official number of vaccinated Americans right now is north of two million. The feds were aiming for 20 million by New Year’s. Someone pointed out last night on Twitter that we’ve had around three million new confirmed cases of COVID in the U.S. since the vaccination rollout began, which means at the moment the virus itself is immunizing people more efficiently than Operation Warp Speed is.

It’s going to get better as the process becomes more systematized and an infrastructure develops to support it, just like testing got better. But it took many months for testing to reach its current levels of efficiency, and many months now means hundreds of thousands more deaths. Experts want to know: Why wasn’t the infrastructure for distributing the vaccine as much of a federal priority as developing the vaccine was? HHS and the biotech industry moved mountains to produce an effective vaccine in record time but the plan for delivering it into people’s arms appears to be, “We’ll let the states and CVS worry about that.” Take it from the man in charge:

It is up to the States to distribute the vaccines once brought to the designated areas by the Federal Government. We have not only developed the vaccines, including putting up money to move the process along quickly, but gotten them to the states. Biden failed with Swine Flu!

“We’re repeating all of the mistakes we made with PPE and testing all over again.” –@ashishkjha on the coronavirus vaccine rollout pic.twitter.com/Fcf1IEA3vb

There is money for vaccine distribution in the new COVID relief package, Jha noted last night. But that means states are going to need to build a system on the fly after the process has already begun instead of having an efficient delivery mechanism in place on day one:

Addendum@SpoxHHS are pushing back on this thread

Over past 9 months, on average, states/territories got $6M each, yes Million, for vaccine readiness

So not "no money" Just trivial $

Distribution isn’t just underfunded, it’s understaffed thanks to the relentless demands of containing the pandemic. From local departments of health to frontline doctors and nurses, no one has a spare moment to stand up a fantastically ambitious, urgent nationwide vaccination program:

“We are trying to plan for the most complex vaccination program in human history after a year of complete exhaustion, with a chronically underfunded infrastructure and personnel who are still responsible for measles and sexually transmitted diseases and making sure your water is clean,” Moore said. Although Operation Warp Speed spent $18 billion on developing vaccines, the federal government initially offered states less than 2 percent of that—$340 million—to deploy them. The recently approved stimulus bill will add $8 billion for vaccine distribution, but, though welcome, those funds were needed months ago. And there is still no national vaccination strategy, said Saad Omer, a vaccinologist at Yale. The Trump administration has again left things up to the states, which have again concocted a hodgepodge of plans. “We shouldn’t be going into the biggest immunization effort this country has ever undertaken without a solid playbook and without enough resources to back the plays,” Omer said.

These numbers make me think this really is a staffing problem at heart. The only reason why vaccinations should be declining on weekends right now is there are simply fewer people on duty on Saturdays and Sundays to dispense doses:

From NYC's data on how many people are vaccinated per day, it's looking like considerably fewer people are being vaccinated on weekends (and holidays) than weekdays. It seems like we really ought to be vaccinating as many people as possible 7 days a week.https://t.co/Bqt3U7oFG8 pic.twitter.com/xPIQRtC0VG

“We certainly are not at the numbers we wanted to be at the end of December,” Anthony Fauci admitted to CNN this morning. He expects the pace to pick up soon, but that sounds more like a wish than a prediction. At some point today Joe Biden reportedly “plans to call out the Trump administration for falling short on the pace of vaccine distribution, and will discuss his own plan to get people vaccinated as quickly as possible,” which I’m eager to hear about. How’s he planning to put more people to work to administer shots to the public in a short period of time? Are we already at the point where we’re calling in the National Guard? Is there an incentive plan to bring older doctors and nurses out of retirement and put them to work giving out shots, maybe?

An obvious solution (which may or may not be Biden’s solution) is to tap the gigantic pool of laid-off Americans by hiring and training thousands to dispense the shot. That’ll be tricky with Pfizer’s vaccine since the product needs to be kept ultracold and then thawed, which may require more advanced training by a medical professional. But Moderna’s vaccine is less finicky, and the one-shot Johnson & Johnson vaccine that’s in the works may be less finicky still. Rapid vaccination *can* be done. Israel, with a population of just nine million, is processing 100,000 vaccinations per day and is already well on its way to getting the entire country vaccinated within a few months:

We estimate that in a week we will see a lower percent of 60+ years old out of the critically ill, going from ~70% now to ~20% by mid-January

Set up vaccination centers, like Israel has, and start training unemployed people who need jobs to dispense the shots. By the time everyone’s trained and ready to roll, there’ll probably be enough of a stockpile of doses at Pfizer and Moderna that we’ll never need worry about a shortage as the process takes off.

Here’s Leana Wen with some hard math. Obviously the pace of vaccinations will increase. The question is by how much, and how soon.