U.S. has vaccinated one million so far — after aiming for 20 million by year’s end 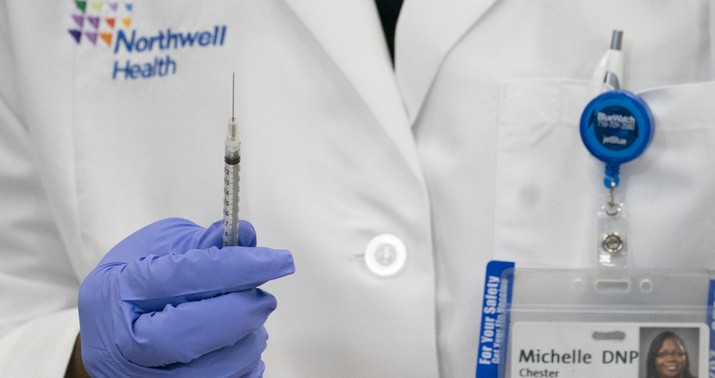 Ed flagged this in a post earlier but I think it deserves its own thread. I’ve been debating with myself since last night what the proper level of consternation about it should be.

The Centers for Disease Control and Prevention said 1,008,025 shots had been administered as of Wednesday at 9 a.m. ET.

That’s roughly 19 million doses shy of earlier projections for December and leaves public officials a little more than a week — about 8 days — to try to close that gap. The U.S. would need to vaccinate more than 2.1 million people per day through Dec. 31 to meet its goal. Two vaccines – from Pfizer and Moderna – have been authorized for use by the Food and Drug Administration, and the U.S. has shipped a total of 9,465,725 doses across the nation, according to CDC data.

Moncef Slaoui, the head of Operation Warp Speed, said at a White House event last month that he expected 20 million doses might be available by the end of the year. He overestimated by … a lot, it turns out. And as the now-familiar saying goes: Vaccines don’t save lives, vaccinations save lives. Having nearly 10 million doses “available” is wonderful — but largely useless if only 10 percent of them are ending up in people’s arms.

There’s a good case, made by Ed in his post, that this is no big deal. It’s still incredibly early in the process, is it not? And we all knew there’d be hiccups as the rollout began. Think back to March and the crippling shortage of testing in the U.S. as the virus burned through New York, New Jersey, and parts of the northeast. The country didn’t see its first day of more than 100,000 tests until March 26. Three days ago it conducted more than 20 million, a 20-fold increase. Just as we got much, much better at testing over time, we’ll get much, much better at vaccinating people en masse. Don’t forget either that vaccines from companies other than Pfizer and Moderna may be coming online soon, and may also be much easier to cope with logistically than the current ones. Johnson & Johnson’s product is a one-dose shot that can be stored for months at standard refrigerator temperatures, without the ultra-cold technology needed for the current ones.

This is a tremendously ambitious national effort that’s been put together with almost miraculous speed, with the vaccine moving from development to shots in arms in the span of 11 months. Our famously sclerotic federal bureaucracy did something quickly and effectively for once. Are we really going to sit here and bitch that their most ambitious timeframe for getting 20 million people vaccinated will end up having been too optimistic by a few weeks?

There’s a good case for worrying too, though. Yes, of course the feds should be given lots of slack in the earliest weeks of the rollout. But what do the difficulties we’re experiencing now portend about the pace of vaccinations two or three months from now? I thought the main difficulty early would be making sure that the weekly supply from Pfizer and Moderna could keep pace with the demand, but that’s not the problem. We have more doses than we’re able to use right now, as noted above. It turns out that administering the vaccine expeditiously is more challenging than many of us thought:

The slow pace has barely picked up from the first week when 614,000 shots were given although nearly 2.9 million were shipped…

Jason Schwartz, assistant professor of health policy at Yale School of Public Health, described the initial tally as “discouraging” and said “the challenges of getting vaccines out as quickly as we’re able to manufacture them will only grow.”…

[A doctor in Boston] He said experts at the hospital modeled that giving Pfizer’s COVID-19 vaccine would take 10 minutes, about two to three times as long as a flu shot, due to the procedures needed because the vaccine is stored in a deep freeze.

Slaoui himself admitted to reporters yesterday that the process of getting shots in arms has been slower than he expected.

It seems to me that two of the easiest groups in America to vaccinate en masse should be medical professionals and nursing-home residents, the two groups that are being vaccinated right now. Large numbers of them are concentrated in specific locations, after all. As long as doses are plentiful, and they are right now, one would think it’d be easy enough to vaccinate an entire nursing home or hospital in the span of a few hours. If it’s this time-consuming to get America’s population of doctors and nurses inoculated when they have the vaccine at their fingertips and know how to administer it themselves, how long is it going to take to get average joes vaccinated in March and April?

In fact, some of the challenges doctors are dealing with in getting immunized presage the problems we’ll have in getting the wider population immunized. A few weeks ago Stat published a report warning that inoculating medical professionals won’t be as much of a breeze as everyone supposes. Not all doctors and nurses work in major cities, needless to say, and not all rural facilities have the capacity to store the vaccine in the conditions required. Medical workers in more rural locations will need to travel, potentially for hours, to get their shots. They may need a sick day after a dose due to side effects. Who handles their duties on the job while they’re busy getting immunized and coping with the aftermath?

The real shortage at the moment is manpower, not the product itself. Doctors and nurses are a little busy these days, as we’re all aware, which limits their ability to staff a gigantic effort to vaccinate the entire U.S. population. States are so desperate for people to administer shots that they’re deputizing medical and nursing students, even firefighters, to do it. I assume at some point we’ll hear talk of sending the National Guard out to locations in major cities to deliver the jab. Ed had a smart idea: Why not offer people early access to the vaccine in exchange for volunteer work administering the shots to others? In return for, say, two hours of training and a 10-hour commitment to dosing it out, you get to cut the line.

And time is of the essence here. This isn’t like the slow rollout of testing in February or March, where more tests early might have helped prevent some transmission but may not have radically changed the outcome. We will get radical changes in the outcome depending upon how efficiently the vaccine is distributed. The slower it rolls out, the more people die. Simple as that. And there’s a lot of death on tap for January and February:

BREAKING: @TSA screened 1,191,123 individuals at airport checkpoints nationwide yesterday, Wednesday, Dec. 23. It’s the highest checkpoint volume since March 16, when 1,257,823 people were screened. If you choose to travel this holiday, please wear a mask.

The feds are hoping to reach 100 million vaccinations by March, which, er, is not a proposition I’d wager on. That said, we may be doing better right now than the headline of this post would indicate. Gen. Gus Perna told Reuters that there’s a reporting lag in the CDC data, which is where the “one million” figure comes from. We’re beyond that already, although it’s unclear how far beyond. The CDC reminded Reuters that there’s also a reporting lag on the part of the states that are actually dosing out the shots. Probably not so much of one that we’re actually going to hit the 20-million target before New Year’s, but enough that we’re not actually at a mere five percent of what our target was for the end of 2020.

If the slow pace continues, I wonder if we might end up with the feds easing off of prioritizing different groups (e.g., senior citizens) within the population and allowing a first-come-first-served free-for-all. In a way, that’s counterintuitive: If the big problem right now is manpower in administering the shots, the last thing we want is young adults getting on line and forcing some seniors to wait. But there are bound to be refuseniks in the senior population, and some seniors will doubtless be slow to get the shot even if they’re willing — and meanwhile doses will be sitting in pharmacy refrigerators, unused, as the virus continues to spread. If the manpower problem can be solved, the feds may be so desperate to pick up the pace of getting the public immunized that they’ll drop the priority framework and say that anyone who wants it should just go ahead already and get it. We’ll see.