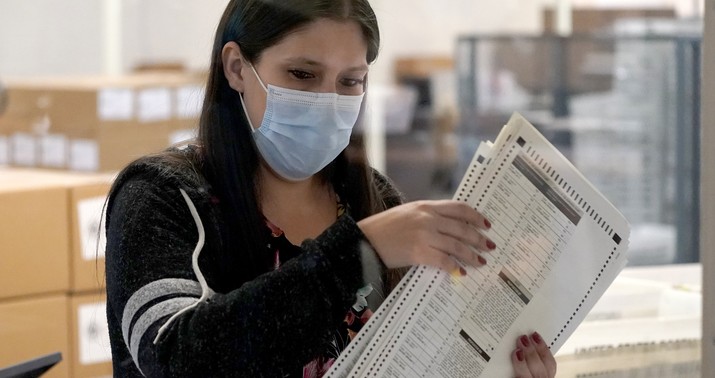 I think Fox will end up being more lucky than good if Arizona holds on for Biden, as nearly every other election analyst this year seems to think their Tuesday night call was premature. But it’ll be hugely gratifying for them to have stuck by their projection under tremendous pressure from the White House and their own viewers to retract it and then have it be borne out by the results.

The latest batch of votes counted by Maricopa County was reported within the past hour. For quirky reasons, mail ballots in Arizona aren’t as solidly blue as they are in states like Pennsylvania. That’s why so many data nerds have thought Trump still has a fighting chance to win there, no matter what Fox’s decision desk might think. To catch up to Biden, though, Trump would need to win the remaining ballots at a clip of 59 percent or so. Not easy — but doable.

The newest votes suggest he’s not going to get there:

Huge deal: that's not a good enough pace for Trump.

Those Maricopa ballots have probably closed down Trump's path in Arizona. He needed to do much better.

Trump wins the new Maricopa, AZ ballots by just 5 points. Don't know if it'll allow a call, but that won't cut it for the president.

In a sense, it doesn’t matter. If Pennsylvania has flipped, every other state is academic. But given Trump’s intent on challenging Biden’s claim to the presidency, the more states that go blue, the harder the challenge is:

If Biden's leads hold in Arizona, Georgia, Nevada and Pennsylvania – and now there's little reason to to think they wouldn't – the president would need to somehow overturn the result in at least three states to win reelection.

Nevada also got a batch of newly counted votes this morning, this time from heavily Democratic Clark County. We’ll probably have a call in NV soon:

NEWS: Clark ballots are in, Biden doubles lead to 22K in Nevada.

Because Fox has already called Arizona for Biden, they have him sitting at 264. Other networks haven’t made that call and therefore have him at 253. If Fox has to make a call on Nevada, they should logically also project that Biden is the next president. Team Trump is reportedly very worried about that given Fox’s influence over right-wing opinion:

The state of play: Aides told Axios they’re dreading the prospect of Fox calling Pennsylvania for Joe Biden, which could make the conservative network the first to give Biden 270 electoral votes.

A Trump campaign official said the internal view was that it’s essential to keep the race “optically” alive, and that if Fox were to call it, it would severely harm their efforts to support President Trump’s (false) claims that he’d already won.

The incandescent anger at Fox within Trumpworld is hard to overstate:

Trump’s advisers remain furious at Fox’s decision desk for its early call of Arizona for Biden, which was seconded by AP. Trump advisers have been unsuccessfully lobbying their contacts at the network to retract the call.

Given the electoral college margin Biden is looking at, obsessing over Fox’s premature Arizona call is just scapegoating at this point. If the election were 259-259 with everything down to Pennsylvania, it’d make more sense for Team Trump to panic about Fox making a call of PA or AZ. As it is, they’ve come up short in too many states to care about “optics” now.

Fox is in a real jam going forward, though. It may be silly to scapegoat them for Trump’s defeat, or at least for “disloyalty” at a critical moment, but scapegoating is inherently silly and yet politics is suffused with it:

I reported a while ago that Fox's internal research shows a substantial portion of its viewers think it's too liberal. There's obviously space to the right, and one Fox person told me that the AZ call and skeptical coverage of Trump have been a "disaster" w viewers. https://t.co/ArakpYSi5V

On life after, anger at Fox / Murdoch family cannot be understated. Should he lose, Trump wants to destroy Fox – aides believe they can steal hosts Hannity & Carlson. Sources believe Trump will never admit he lost should we get there – instead stick with “rigged” “fraud” “stolen” https://t.co/15PzANMS9c

CNN reported earlier that Fox sent a memo to staffers urging them not to refer to Biden as the “president-elect” *even after* they project that he’ll win more than 270 electoral votes. Ostensibly that would be designed to give Trump a little room for legal challenges — i.e., Biden has 270 for now but there might yet be some amazing court case that undoes the results in Pennsylvania, Georgia, Arizona, maybe Michigan and Wisconsin too. (There won’t be.) In reality, I think refusing to designate him as “president-elect” would simply be a form of petty spite designed to signal to angry viewers that they’re still on the team. Calling him “President-elect Biden” would be too … triggering, for lack of a better term.

But since CNN’s report, people on air at Fox have apparently begun referring to Biden as “president-elect,” at least when discussing a hypothetical future. So maybe FNC has thought better of the idea, whether because it’d be bad for the country to encourage viewers not to think of Biden as legitimately elected or because someone on Team Joe warned them that they could forget about access to the new administration if they didn’t change their tune.

As for Trump, the Times says that chatter has begun among Republicans about how to gently bring the president around to the reality that he lost. He’ll never acknowledge it himself; he’s incapable psychologically. The trick is figuring out how to make him be okay with letting the White House as an institution acknowledge it so that the country, and especially the Republican base, can begin to move on.

Republicans have begun having discussions about how to broach the topic with Mr. Trump of focusing on life after the presidency, and what leaving quietly could mean for his family, his business and his own ability to remain in politics.

Some have suggested that sounding notes of encouragement about a 2024 campaign could be effective. Others believe that he will concede if it is clear he has lost, but that he will most likely never publicly accept the result.

In the meantime, Mr. Trump’s advisers were divided on what he should be doing until the final vote counts are announced. There were some discussions about his holding a rally as soon as this weekend, one person briefed on the talks said.

Note the bit about “his own ability to remain in politics.” If Trump goes scorched-earth during the lame-duck session, it’ll make otherwise persuadable voters that much more reluctant to give him a second look if he runs in 2024. The core argument against him among anti-Trumpers in this election was that he’s too reckless and authoritarian to be trusted with a new term when he’ll no longer be accountable to voters for what he says and does. That argument will abide in 2024. What he does as a lame duck, at a moment when he’s also (briefly) no longer accountable, will either strengthen it or weaken it for swing voters.

Exit question: Was there a “McCain factor” to Trump’s apparent defeat in Arizona? Observers last night pointed out that John Lewis’s home district appears to have been the one that finally gave Biden the lead in Georgia whereas McCain’s home state is about to turn blue for the first time in ages. Both states are going right down to the wire. It wouldn’t have taken many voters in either jurisdiction to have held a grudge against Trump for trash-talking a politician they admired and to have voted against him because of it, tilting their state to Biden.

Trump Lawyers Trash Judges' Pennsylvania Ruling, But They Aren't Helping at this Point