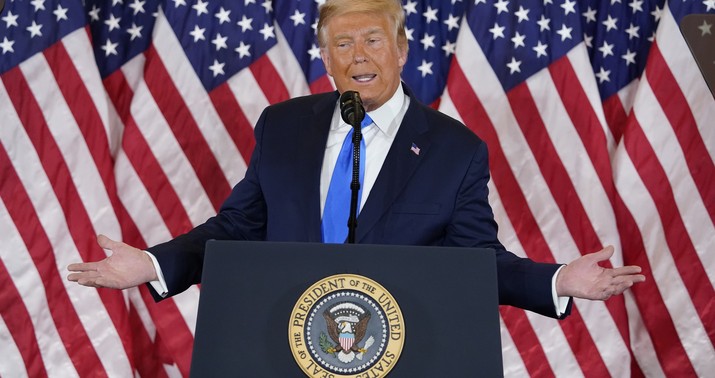 He can’t run in 2024 if he ends up winning this election, of course, and as I write this there’s still a chance of that happening. But the odds are against him. The White House is worried about Pennsylvania calling a lid on the Trump presidency tonight. And they should be.

I’m not as sure as other people are that he’ll run in 2024 but the idea is allegedly being kicked around by Trump himself. The key bit in this passage from the Times isn’t that he’s thinking of running, though, it’s that he’ll continue to have influence over not just who rises within the GOP but how the government functions.

Mr. Trump has long toyed with starting his own television network to compete with Fox News, and in private lately he has broached the idea of running again in 2024, although he would be 78 by then. Even if his own days as a candidate are over, his 88-million-strong Twitter following gives him a bullhorn to be an influential voice on the right, potentially making him a kingmaker among rising Republicans…

That following may yet enable Mr. Trump to eke out a second term and four years to try to rebuild the economy and reshape the Republican Party in his image. But even from out of office, he could try to pressure Republican senators who preserved their majority to resist Mr. Biden at every turn, forcing them to choose between conciliation or crossing his political base.

Until a new generation of Republicans steps forward, Mr. Trump could position himself as the de facto leader of the party, wielding an extraordinary database of information about his supporters that future candidates would love to rent or otherwise access. Allies imagined other Republicans making a pilgrimage to his Mar-a-Lago estate in Florida seeking his blessing.

I don’t think there’ll be a huge “conciliation” wing of the GOP with or without pressure from Trump. There’s also a group of Republicans who have little reason to care what he thinks. McConnell, Collins, and Sasse just won reelection; Murkowski and Romney are quasi-independents and can probably win even with Trump opposing them. But it’ll take 11 or 12 Republicans to beat a filibuster next year on compromise bills and that’d be a heavy lift with Trump hectoring them from the sidelines to vote no on everything in order to make the guy who defeated him miserable.

Which, of course, he’d certainly do. If he’s willing to try to con Americans into believing the election is being stolen from him, he’s willing to use whatever leverage he has to making sure that the U.S. government under Biden effectively can’t operate. Trump is spite incarnate; it’s the whole reason for his appeal. If McConnell wants to work with Biden on anything, he’ll need to find another half-dozen Republicans in his caucus willing to defy Trump and risk enraging his fans. Good luck.

I’ve made this comparison before, but think of the GOP in 2021 as the Twilight Zone episode “It’s a Good Life.” Trump is the kid, the congressional GOP are the adults around him indulging his whims, nervously flattering him about how wonderful he is so as not to earn his wrath, and wishing to God every second of the day that they could be rid of his malevolent selfishness. Key difference: The kid wasn’t as vindictive as Trump is.

In fact, it’s already going on today by proxy. Don Jr tweeted this a little while ago…

One notable exception seems to be Ron DeSantis right now. He has been active and vocal. @RonDeSantisFL

He’s signaling to 2024 aspirants that if they don’t get a lot more enthusiastic about the Trump “voter fraud” con they’ll have no chance at an endorsement from the president, assuming he doesn’t run again himself. (Which is also an efficient way to Don Jr to signal that he plans to be a kingmaker in the party, assuming he doesn’t run in 2024 instead of dad.) Some Trump toadies are using it as an opportunity to tear down potential 2024 candidates from a wing of the party which they disdain:

While some of us are fighting for President Trump…

Nikki Haley is eulogizing him.

Anyway. What if the president *does* run again himself? Philip Klein thinks if he jumps in, it’ll be no contest. Probably right. There’s a fair chance he’d even run unopposed:

Were Trump to announce a run at some point in 2023, he would instantly dominate all media coverage. There would be no other candidate who would be able to match his name recognition or to get noticed by voters.

Republican rivals failed to land a successful attack on him in 2016, when he was an unknown quantity politically. Yet this time, he’d be running as a figure with a proven record of pursuing conservative policies, including three Supreme Court appointments.

Trump has instilled such loyalty that he managed to turn John Bolton — who started his career in politics as a volunteer on the Barry Goldwater campaign and who has for decades fought the DC establishment — into some sort of deep state leftist traitor. Anybody who attacks Trump in a primary would be subjected to the Twitter treatment and become a pariah among Republican voters.

The problem every other Republican would have in challenging him isn’t that they couldn’t conceivably win. They’d be underdogs, but you can imagine someone like Haley calculating that the stink of defeat on Trump from 2020 plus enduring fatigue from his belligerent shtick — especially after another four years of it as a private citizen on Twitter and TV — plus some further demographic shifts that play to her strengths (e.g., the party feeling desperate for someone who can win back suburbanites) might warrant a challenge. The problem isn’t that she can’t win. It’s that she can’t win the general election if she beats him. If, say, 15 percent of the GOP is such a hardcore Trump cult that they’d stay home in November with Trump’s enthusiastic vindictive approval in order to punish her for defeating him, then there’s no point in her challenging him in the first place. She’ll either lose the primary or she’ll lose the general but she’ll lose either way.

This is the same calculation the party went through in 2016, when there were rumors of denying Trump the nomination at the convention, and the same calculation it’s gone through every day since, including when it acquitted him at his impeachment trial. Not every Trump voter is a cultist by any means, but there are *enough* cultists among the Trump base to make the party unviable if they walk. To keep them happy he needs to be indulged, such that anyone who doesn’t indulge him is effectively committing career suicide. In a healthy political culture, Trump would run again in 2024, take his chances against a slew of younger opponents, and then he and his voters would rally behind the nominee if he falls short. In our sick and increasingly sicker political culture, the party’s victory isn’t paramount. The cult leader’s victory is. If he loses, that’s just a reason to hate the party and to punish the people who opposed him.

And of course, if Haley — or Josh Hawley, Ted Cruz, Tom Cotton, or whoever else — was so “disloyal” as to challenge Trump in his big return to politics, their careers would be over if they lost. The safe play for all of them would be to smile, stand aside, be patient for four more year very long years, and then run in 2028.

As I say, I’m 50/50 on whether Trump will run again. I think he might not mainly because he’ll greatly enjoy life once he has all the perks of the job but none of the duties. Republican politicians and righty media personalities will still kiss his ass effusively and patronize him on whichever nonsense conspiracy he’s pushing at a given moment. He may end up participating in some new TV venture, which I think he’d relish. He’s always cared way, waaaaaaay more about television, audience, and ratings than he has governance. Given the rage his team is apparently feeling right now towards Fox News for not pushing his “voter fraud” conspiracy…

…Trump, ever vindictive, might enjoy taking over OAN or starting his own network and trying to punish Fox by cannibalizing its audience. He can still do rallies whenever he wants — and charge admission, and sell merchandise! — without having to do the additional tedious business of running a campaign or handling the presidency. And I think he’d be reluctant to risk running again and losing to another Democrat in 2024, as it would damage his “supreme winner” persona even more. (I assume Biden won’t seek a second term.) He might decide, at the advanced age of 78, that he’d rather keep having fun in his new gig while working his levers of influence to choose the next GOP nominee. Or to just crown Don Jr as his heir apparent.

But then I think: Nothing would stroke his ego quite like a Napoleonic return to power in the primary in 2024. It’s one thing to hold a rally when it means nothing, just you jabbering at a mic, but it’s another to host it as part of a contest for the GOP nomination. Hawley, Cruz, Cotton — no one’s going to turn out crowds like Trump. He’d savor showing them that. I’d bet anything that he regards them as charisma-less losers and would want to rub their faces in it. His vindictive impulses might also overcome his reluctance to risk being beaten again by a Democrat. He’d want revenge, just like he wanted a measure of revenge on Obama for humiliating him at the 2011 White House Correspondents Dinner by running in 2016. And if Kamala Harris ended up as the Democratic nominee, Trump might conclude — quite rightly — that she’d be a very favorable match-up for him. Harris isn’t a good retail politician and she’s further left than the more electable Joe Biden. She’s also a woman of color; various Democratic voters were quoted during the primary this year as saying that Biden’s “old white guy” status reassured them inasmuch as they thought Hillary’s gender ended up being a liability for her in 2016 against Trump’s alpha-male bravado. Harris would have that liability too.

Even if she didn’t win the nomination, there’s no one on the Democratic political landscape right now with the sort of charisma and electability a la Obama 2008 that might present a formidable challenge to Trump. Don’t say “AOC” either. Not only would her age spook voters, we just sat through an election that ended up being much closer than anyone expected because lefties ended up weirding out too many swing voters with their radicalism.

Looking at all that, might he decide to run? Sure. It’s just a question of whether the next four years are so sweet that he can’t bear to give up his new life. Or, I guess, if he gets sent to prison before 2024.

Here’s your exit quotation. Can’t wait for the primary.

My summary of another extraordinary day for American democracy. pic.twitter.com/BbwqXvq2gy

WATCH: Giant waves take out a bicyclist riding next to Lake Michigan in Chicago