Trump: Fauci and these other idiot scientists are a disaster and Americans are tired of hearing about coronavirus; Update: “Also, bad arm!” 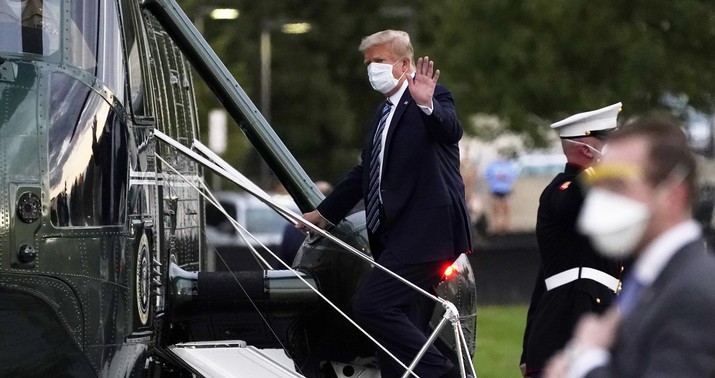 Perfect closing message, sir. “The doctors are morons” and “people are bored with a deadly disease that’s spiking again in the U.S. right now” is exactly what those suburban moms you’ve been courting have been waiting to hear. You have your finger on the pulse of swing voters.

May I recommend a little pro-QAnon rhetoric today as well, to really lock them down?

The final two weeks of this campaign are going to be pure self-sabotaging panic and flailing rage. (The two weeks *after* the election will be even more insane than that.) As surreal as the first debate was, Thursday night has a real chance to top it.

Trump says every time Fauci goes on TV it's a "bomb," but it's a "bigger bomb if you fire him."

Didn’t we just have a news cycle about the Trump campaign insisting on using a clip of Fauci in their ads, against his wishes, because they know the public (especially non-Republicans) likes him and trusts him on the virus?

There are 15 days to the election, which means today represents 6.67 percent of Trump’s remaining time to move the needle. This is what he wants out there this afternoon for some reason. As a matter of strategy, it’s madness. As a matter of impulse, in which he just reacts to whatever’s on his TV from moment to moment, it makes sense. This was on his TV last night.

Dr. Fauci says he was “absolutely not” surprised that President Trump got sick with coronavirus after seeing POTUS at what “turned out to be a super-spreader event” at the White House. https://t.co/Iq75GoCErk pic.twitter.com/iDWEaoX582

“Trump’s been caught in a vicious cycle that’s especially pronounced with COVID where his credibility problems require him to cede ground to others in the administration, but his political and personal instincts fundamentally will not allow it,” says Benjy Sarlin, succinctly, of Trump’s dynamic with Fauci. If I were Biden, I’d mention Fauci at every opportunity during the final debate to see if I could bait POTUS into ripping on him in front of an audience of 70 million people or whatever. Dems would like nothing more than to have a “Trump versus scientists” subplot to the closing days of the campaign while early voting is going on and headlines like this are circulating. And he seems eager to oblige them, for whatever reason:

I’ll say this for him: If he’s going down on November 3, at least he’s going down with the message that got him there. There’ll be no last-minute switcheroo in which he tries to convince undecideds that safety is his top priority. From day one of the pandemic, his view has been that the public is making too big a deal of it and everyone should get back to normal. He’s going to ride or die with that talking point. Good.

And now we come to an important question. Should Anthony Fauci or Deborah Birx or Robert Redfield quit? Trump’s comment today about how it’d be a “bigger bomb” politically to fire Fauci than to let him go on counterprogramming the administration’s message is ominous. If he loses on November 3 — especially if he loses badly — it’s possible if not likely that he’ll purge all of the people in the administration who’ve crossed him in one way or another. Chris Wray, Fauci, Redfield, maybe Birx, possibly even Bill Barr could be fired on the morning of November 4 as an enraged Trump tries to cheer himself up by punishing his enemies. Every one of those people should ask themselves whether they’d rather leave on their own terms right now and share what they’ve seen about how the administration operates, knowing that voters would be keenly interested, or whether they’d rather be humiliated with a public termination during the lame-duck session, when their opinion won’t matter anymore.

Birx may be the likeliest candidate to do that. Trump hasn’t attacked her the way he has Fauci because she’s kept a low — very low — profile. She basically serves as a White House goodwill ambassador to colleges and other COVID hot spots now, blowing into town to discuss sound practices for containing the pandemic and then leaving. But she could do that as an independent consultant just as well. And she seems to be the insider who’s taken the strongest objection to the direction of the coronavirus task force under Scott Atlas:

Birx recently confronted the office of Vice President Pence, who chairs the task force, about the acrimony, according to two people familiar with the meeting. Birx, whose profile and influence has eroded considerably since Atlas’s arrival, told Pence’s office that she does not trust Atlas, does not believe he is giving Trump sound advice and wants him removed from the task force, the two people said…

These days, the task force is dormant relative to its robust activity earlier in the pandemic. Fauci, Birx, Surgeon General Jerome Adams and other members have confided in others that they are dispirited…

At a task force meeting late last month, Atlas stated that there was herd immunity in much of the country because of a combination of high infection rates in cities such as New York and Miami and T-cell immunity, according to two senior administration officials. He said that only 40 to 50 percent of people need to be infected to reach the threshold. And he argued that because of this immunity, all restrictions should be lifted, schools should be opened and only the most vulnerable populations, such as nursing home residents, should be sheltered.

This resulted in a fierce debate with Birx and Fauci, who demanded Atlas show them the data that backed up his assertions, one of the officials said.

Remember, Atlas isn’t even a specialist in infectious disease. He’s a radiologist who used to do Fox News hits and was added to the task force by Trump because Trump liked the fact that he was anti-lockdown. Yesterday Twitter removed a tweet Atlas sent in which he insisted that masks don’t work to reduce infections despite all evidence to the contrary. The de facto head of the White House’s task force on handling a deadly disease is being put in time out on social media for tweeting like some run-of-the-mill denialist crank.

Update: These tweets are funny, but they also reminded me of Tim Miller’s point yesterday that Trump spends a lot more time with fighting with people on his own side than he does his actual opponents. He hasn’t had much to say today about Democratic Senate candidates, but he’s taking ol’ Tony Fauci out to the woodshed.

…P.S. Tony should stop wearing the Washington Nationals’ Mask for two reasons. Number one, it is not up to the high standards that he should be exposing. Number two, it keeps reminding me that Tony threw out perhaps the worst first pitch in the history of Baseball!