Just what Trump needs: A public fight with Fauci in the final weeks of the race 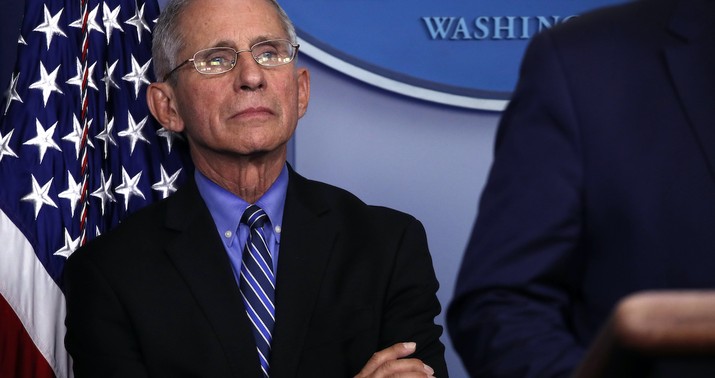 Time is scarce. When you’re in the sort of polling hole he’s in, you want to make sure that each day’s message and the resulting news is optimally tailored to give you the best chance of gaining ground.

Picking a fight with the country’s most well-known public-health figure when your biggest electoral liability is the perception that you’ve never taken the pandemic as seriously as scientists recommended is not “optimally tailored.” It’s more of an anti-strategy, the sort of thing you’d do if you wanted your opponent to win, than a strategy. I don’t think Trump’s thinking strategically at all, in fact, unless by “strategy” we mean “indulging his impulses at every given moment and trusting blindly that voters will love it.” He’s just lashing out at critics, as he always does, and calling it “counterpunching” even though his campaign threw the first “punch” in this new spat with Fauci.

See why I’m confused as to why he didn’t wear a Superman t-shirt upon leaving Walter Reed? If you’re going to do self-destructive things in the home stretch of the campaign just because you feel like it, why not dress up like Superman too?

Yesterday I wrote about the new ad he’s running featuring a clip of Fauci from March insisting that the coronavirus task force did everything possible to limit community spread. Fauci took exception to that since the quote was taken somewhat out of context and was presented as a quasi-endorsement of Trump. I thought his complaints were overstated, but certainly Team Trump could have showed him the courtesy of asking in advance if he was okay with them using that quote in an ad. Fauci’s a civil servant, not a political appointee, and he’s understandably sensitive to the public forming partisan judgments about him based on a perceived campaign affiliation. He might also quite reasonably object to the White House trading on his public credibility when Trump cronies like Peter Navarro and Mark Meadows have tried to undermine that credibility by criticizing him publicly, with some success.

Most of all, though, the campaign should have sought Fauci’s approval for the simple reason that the ad would obviously backfire on them if Fauci felt blindsided by it and took to criticizing it publicly. The entire point of the spot is to suggest that Fauci is on Team Trump. Pissing him off was guaranteed to start a media frenzy in which Fauci would be given multiple opportunities on national TV to clarify that he’s *not* on Team Trump. Instead of trading on his credibility, the ensuing dispute would become a test of credibility between him and the president, with Fauci making a big show of withholding his endorsement.

So dumb. But here’s what we’re doing on a day that represents nearly five percent of the president’s remaining campaign time.

Dr. Anthony Fauci says “it’s really unfortunate and really disappointing” that the Trump campaign featured him in an ad touting the President’s handling of the Covid-19 pandemic.

He tells @jaketapper that he thinks the ad should be taken down. https://t.co/oDDlgwvCkE pic.twitter.com/JLTbTVhJ7o

Asked by The Daily Beast if his comments were a thinly-veiled threat to leave his post if he ended up in a new campaign spot, Fauci replied: “Not a chance.”

“Not in my wildest freakin’ dreams,” he said, “did I ever think about quitting.”

From there, Fauci went on to explain what he meant by “backfire.”

“By doing this against my will they are, in effect, harassing me,” Fauci said. “Since campaign ads are about getting votes, their harassment of me might have the opposite effect of turning some voters off.”

He’s all but admitting that he’s complaining about the ad publicly to neutralize its effect on voters, and maybe even cost Trump votes. Still don’t think they should have gotten his approval beforehand?

Maybe there'd be a needle to thread for a skilled politician. I'm not sure high support for lockdowns in polls squares with people's behavior/revealed preferences.

But attacking Dr. Fauci, or saying you're immune and want to kiss everyone, isn't it. https://t.co/JGVREvQXqT

The bit about “kissing everyone” is a reference to a joke Trump told at a rally last night, boasting of his newfound immunity to COVID by saying he’d be happy to kiss everyone there. That’s amusing, but it also reminds voters that he and many of his fans have been reckless in protecting themselves from infection, which is how we ended up with a huge outbreak at the White House. The fact that he needed to go to the hospital for COVID and yet continues to pack crowds in together at rallies without requiring masks operates as another bit of anti-strategy. Fauci dinged him for that too yesterday:

Dr. Fauci says Pres. Trump resuming in-person rallies is “asking for trouble” and “now is… a worse time to do that because when you look at what’s going on in the United States it’s really very troublesome. A number of states, right now, are having increase in test positivity” pic.twitter.com/cXPSXIg4aS

The smart thing to do at this point would be to yank the ad, let the story quietly die, and refocus today’s message on, say, the economy. But when all you have is impulses, not strategy, then the impulse is naturally to hit back:

Actually, Tony’s pitching arm is far more accurate than his prognostications. “No problem, no masks”. WHO no longer likes Lockdowns – just came out against. Trump was right. We saved 2,000,000 USA lives!!! https://t.co/YyLyCsbZ7a

If Fauci’s prognostications are worthless, why the hell would you feature him in an ad? And why would you tee up the media to ask that question by insulting him?

David Bahnsen made a smart point in this essay published a few days ago. I’d vote for Trump if I lived in a battleground state, he wrote, but I also sympathize with people who can’t bring themselves to do so. Quote:

I have grave concerns with one who spent three decades seeking to avoid business and marital commitments, but once that person was elected, perhaps I could grapple with the complexity of one’s lifetime moral deficiencies towards a potential greater end. But how can I do that if the very behavior and temperament I am talking about keep that person from staying in office long enough to do all the things I am told are so important for the betterment of the country? In other words, why is it the fault of those annoyed by boorish and crude and childish and stunningly unpresidential behavior and not the person who is, ummmm, President of the United States?

If there is one thing I hear more than anything else from those confused by my [fair and warranted] criticisms of President Trump, it is that the desperation of the times calls for “movement” people like me to press pause on my fetishes for norms and manners, and just accept that the Supreme Court, lawlessness in the cities, cancel culture, and other sorts of truly desperate situations trump all of the unpleasantries of the President and his tweets. And indeed, we are living in serious times. And the stakes in our culture are high right now. And Joe Biden, Kamala Harris, and the Democratic Left have a vision for America right now that is self-evidently disastrous, and should be resisted and stopped at all costs.

We were told in 2016 that it was a “Flight 93 election” in which all misgivings about Trump had to be laid aside to prevent Democrats from crashing the proverbial plane. This year is a “Flight 93 election” too, the president would say. And yet Bahnsen’s right — only Republican voters, not Trump himself, are expected to make sacrifices to prevent the crash. It would have been a small sacrifice for him to substitute Scott Atlas in the campaign ad for Fauci, or not to run the ad at all if Fauci objected, or at the very least not to hit back at Fauci after he complained publicly about the use of his image. But he couldn’t resist. He’s not storming the cockpit to take control of the plane before it crashes, he’s leaning on the controls and steering it into the ground because he’s not smart or self-disciplined enough to resist a fight that’s clearly damaging to him, even in the home stretch of an election.

The examples are endless. Why couldn’t he insist on masked-up, socially distanced rallies for the final weeks of the campaign just to set a good example and earn some positive coverage, however belatedly? Why couldn’t he resist complaining about the FDA taking its time on approving a vaccine, even though his haste on getting something approved before Election Day has clearly hurt public confidence in the vaccine process and further damaged trust in him? Why didn’t he grab Senate Republicans by the lapels months ago and demand that they pass a robust stimulus rather than sit on his hands while the economic recovery slowed down?

Why didn’t he take basic precautions at the White House to avoid an October COVID outbreak that might effectively end his chances at reelection?

At what point does Trump himself bear some blame for not treating this like a “Flight 93 election” by doing things that are designed to help his chances instead of whatever happens to be in his head at a given moment?

I’ll leave you with this, another foreseeable consequence of picking a fight with Fauci.

Airing digitally and nationally on Fox and Friends. pic.twitter.com/evEYaHjG47