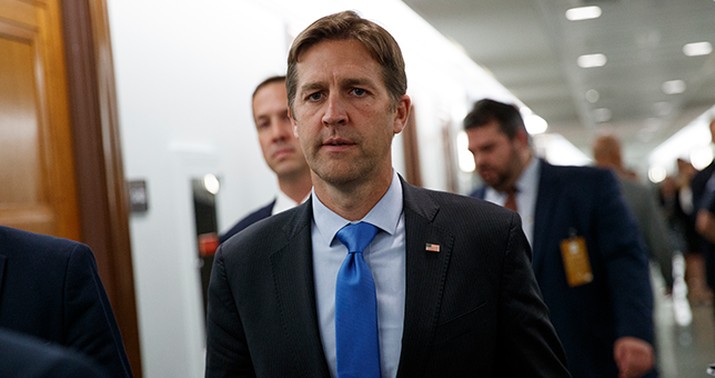 I may be a Never Trumper, but in the battle of POTUS versus the Republican weasels in the Senate who gladhanded him for four years only to finally find their balls when he slipped 10 points behind Biden, I’m as MAGA as they come.

Watching him attack Ben Sasse on Twitter yesterday made me think of Eddie Murphy on the courthouse steps in “Trading Places”: May I suggest using your nightstick, officer?

It would be a remarkable irony if the angel of vengeance against Republicans for playing ball with Trumpism turned out to be Trump himself, but they need to suffer for their sins and he may be the only figure in American politics who can inflict real suffering on them. They shouldn’t be allowed an opportunistic retreat in the face of defeat, when tongues are suddenly loosened after four years and we hear from all quarters that they never much liked him. The president will retain enormous influence over the party after he’s left office; he should use it to make sure that the pols who made a devil’s bargain with him keep up their end of it even when he’s gone. If they had nothing too disapproving to say about the many, many, many civic norms he flouted while in office, they shouldn’t have anything to say afterward.

Make them wear it forever, Mr. President. I pledge my full support in the effort.

…Nomination to run for a second term. Then he went back to his rather stupid and obnoxious ways. Must feel he can’t lose to a Dem. Little Ben is a liability to the Republican Party, and an embarrassment to the Great State of Nebraska. Other than that, he’s just a wonderful guy!

….practically nothing. Both Senators became totally unelectable, couldn’t come even close to winning their primaries, and decided to drop out of politics and gracefully “RETIRE”. @SenSasse could be next, or perhaps the Republicans should find a new and more viable candidate?

You know why he’s going after Sasse if you read this post, which actually overlooked the most cutting thing Sasse said about Trump on his call with constituents. Quote: “The debate is not going to be, ‘Ben Sasse, why were you so mean to Donald Trump?’ It’s going to be, ‘What the heck were any of us thinking, that selling a TV-obsessed, narcissistic individual to the American people was a good idea?’”

I’m much less confident than Sasse himself seems to be that the debate post-defeat won’t be “Why were Senate Republicans so mean to Trump?” The MAGA base will be looking for scapegoats, and the TV-obsessed narcissistic individual-in-chief isn’t eligible for that role. In fact, if Trump really wants to punish them, he should start complaining loudly that they’re in the process of sabotaging him and the American people, right at this moment, by refusing to consider a new coronavirus stimulus package that’s commensurate with the public’s need. It’s one thing for Trump to whine that a bunch of fellow politicians were fickle in their support for him, it’s another for him to lay at their feet the economic punishment that Americans will feel this fall if the caucus won’t pass a big stimulus.

That’s *real* political pain. And he’d be perfectly right to inflict it on them.

The Daily Beast reports that he’s keeping a list of who’s naughty and who’s nice in the final weeks of the campaign. Imagine if a bunch of Senate Republicans decide to finally unburden themselves this month of their true feelings about Trump…

What Sasse said about Trump is mild compared to what others, including some who work in the White House currently and a lot of elected Republicans, say.

…only to see him shock the world again by winning a second term on November 3. How much more obsequious would the ass-kissing need to be next year to atone for their ill-advised disloyalty?

Anyway, from the Beast:

According to one of the sources with direct knowledge, the president is already contemplating retribution.

“[The president] said something to the effect of: If you’re backing away from him now, don’t bother coming back for a favor when he wins,” the other source said. “He made a comment about how there are some people out there who you can only count on when things are going your way.”

Some of the coverage that has been bookmarked for Trump includes recent stories on Senate Majority Leader Mitch McConnell (R-KY), who has not only split with the president on coronavirus-related stimulus legislation but made a point of saying he hadn’t been to the White House in weeks because of its cavalier approach to the pandemic.

Declare war, Mr. President. His tweets about Sasse are actually pretty warlike, in fact, as he comes right up to the edge of saying that GOPers in Nebraska shouldn’t vote for Sasse next month. If Sasse hits back at him this week for those tweets, might Trump actually reach that point where he anti-endorses him? Normally I’d say, “Nah, McConnell will talk him out of it.” But as you can see from the excerpt, McConnell’s also guilty of disloyalty. He may have lost his sway inside the White House now.

The latest Republican to distance himself from Trump — more tactfully than Sasse, but still — is John Cornyn, who’s likely to win his Senate race next month but not quite the sure thing he usually is in Texas.

Cornyn initially described his relationship with Trump as “maybe like a lot of women who get married and think they’re going to change their spouse, and that doesn’t usually work out very well.”…

“[W]hen I have had differences of opinion, which I have, (I) do that privately,” Cornyn said. “I have found that has allowed me to be much more effective, I believe, than to satisfy those who say I ought to call him out or get into a public fight with him.”…

Cornyn said he also disagreed with the way Trump handled trade agreements with China and other Asian countries. Trump in 2017 pulled the United States out of a Trans-Pacific Partnership, an agreement that would have expanded trade in 12 countries…

Cornyn also opposed taking money from the defense budget to build portions of a border wall, saying he is “very much a defense hawk” who disagreed with the use of national security funds for that purpose.

Those “private” disagreements suddenly aren’t so private. May I suggest using your nightstick, officer?

I’ll leave you with this tragicomic graphic from Tim Miller, who noticed that our fightin’ president seems to have a hierarchy of people whom he’s eager to fight with. Disloyal Republicans rank much higher than Democratic candidates from the other party, about whom Trump rarely tweets even though the GOP would stand to benefit from him using his platform to attack them. (Miller found exactly two Trump tweets this year targeting Dem Senate challengers versus 15 targeting Joe Scarborough.) Normally the president’s habit of fighting people who are aligned with him is a liability. Post-presidency, I think it’ll operate as something resembling justice.

My weekend newsletter on who Trump fights and who he doesn’t and how that is defining the home stretch of his campaign.

With a bonus DIY Trump pyramid ranking who he hates! https://t.co/c2RycuZ7Jp pic.twitter.com/DApiElSJSC