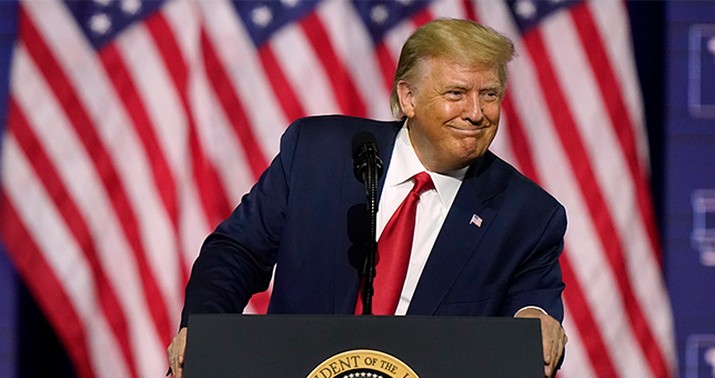 I’m inclined to disagree although a strong counterargument eludes me. Partly I’m skeptical because of the lingering memory of the “Access Hollywood” episode, which happened at around this point of the 2016 race and was also cracked up at first to mean the end for Trump. And his polling did take a hit in mid-October — before rebounding steadily over the final three weeks of the race, abetted by James Comey’s announcement that he was reopening the Emailgate investigation. But there’s no real logic behind the comparison besides a facile feeling of “this setback vaguely reminds me of that other setback, and he recovered from that other setback, so why wouldn’t he recover from this one?” Other people have thought of the “Access Hollywood” scandal today as well, although their logic doesn’t seem to be any better than mine:

Source close to Trump campaign just likened Trump's positive covid-19 test to the fallout after Access Hollywood tape was released on Oct. 7, 2016. It (temporarily) cost him ~ 2-4 points in public polling. "I'm guessing this is slightly more problematic than that," source added.

Trump had two things going for him in 2016 that he lacks now. One was the fact that Americans disliked his opponent about as much as they disliked him. And the other was that he was the “change” candidate, the guy challenging the (de facto) incumbent. Undecideds tend to break late against the incumbent in situations like that. Trump himself is the incumbent this year.

Another reason I wouldn’t count him out is the plain fact that nothing seems to affect the state of the race. A pandemic, massive racial demonstrations, an unprecedented recession — through it all Biden’s led by five to seven points, with a brief bounce this summer during the BLM protests. If none of those other things changed the race, why would Trump’s COVID diagnosis do so? He had a roughly 20 percent chance of winning the election yesterday, according to modelers like FiveThirtyEight. I assume he still has a 20 percent chance today.

My best theory for why he might not be licked yet is that if/when he returns to the campaign trail, his supporters will get a thrill from it and some centrists may feel inspired by his comeback or sympathetic to his ordeal. Everyone gets excited when a boxer climbs up off the canvas after getting knocked down and insists on continuing the fight. That might be worth a bounce to him.

But for how long? A week? Once he’s back on the trail he’ll be the same old Trump, refusing to repay any sympathy from the public with sympathy for his critics or enemies in turn. Besides, given the polling trends lately, it might take a big, big bounce to affect the outcome at this point. Who are the voters out there thinking, “I think he’s unfit for office and I’m sick of his shtick, but he fought off COVID thanks to great medical care so now I feel obliged to give him four more years”?

All of which is a long way of saying that while I don’t quite agree that “he’s f***ed,” I understand where people are coming from with that:

“He’s f**ked, we’re f**ked,” said one White House aide who is not authorized to speak publicly. “No matter what we do, the next two weeks or more will be about him not being able to protect himself or us from Covid.”…

When informed of the Biden campaign’s announcement that the former VP and his wife, Dr Jill Biden, had both tested negative, the aide replied: “Double f**ked.”

Michael Starr Hopkins, a Democratic strategist, also opined that Trump’s positive diagnosis spells the end of his campaign’s attempt to get Americans to focus on anything other than the pandemic.

“Any hope he had of being able to change the conversation to things like protesters or the economy are all shot. And getting infected with Covid after standing on a stage at a presidential debate, mocking Joe Biden for wearing a mask, and then going to Bedminster knowing that he was potentially infected is — I think that that’s just gonna be the end of it for voters,” he said.

Den Eberhardt is a Trump donor:

MAGA rallies are over. RIP Trump is most effective in the MAGA rallies and those rallies were perhaps Trump’s best backdrop for making the case that America is rounding the corner. How does he make his closing argument that we are safe and the economy is recovering without them?

He’s identified the two big problems in one tweet. One is that Trump’s off the trail and can’t use rallies to get his supporters ramped up to vote. The other is that his diagnosis inevitably elbows aside all other news — Barrett, stimulus negotiations, mail-in ballots — and refocuses it on an issue on which he’s polled brutally for months, the pandemic. Fairly or not, his own infection will be treated by many as a sort of verdict on whether he’s taken the threat from COVID seriously enough. When the subject is the economy Trump polls three or four points ahead of Biden, Frank Luntz noted to Fox News today. When the subject is the pandemic Biden leads big. For the next 10 days or more, the talk of the country will be the pandemic.

On top of all that, early voting has begun in some states. The remaining debates, Trump’s two best opportunities to damage Biden, may not happen at all now or may happen in a format that makes it harder for him to land solid shots, like a Zoom set-up. And even if his recovery improves his personal popularity, there’s no guarantee that that would translate to horse-race polling:

As we wrote today, it's possible that Trump's diagnosis could (most likely temporarily) help his personal ratings without helping his head-to-head polls against Biden. https://t.co/pmmemVt3yD https://t.co/AYOrNASlT9

There’a also a chance that Trump’s misfortune will improve views of *Biden* via a sort of “Goofus and Gallant” dynamic in how they’ve approached the risk from COVID. One GOP consultant told Politico he thinks it’s possible that Sleepy Joe’s hide-in-the-basement approach will seem more judicious and considerate to voters now instead of a strategy to shield a senile old man from public view. As you’ll see below, Biden went so far as to announce today that he’d canceled a planned event in Michigan because proper social-distancing couldn’t be done given the space constraints. He’s eager to remind voters in light of Trump’s diagnosis that he’s taken the virus seriously from the start.

The easy take, then, is that Trump’s illness will neither doom him nor help him, maybe costing him a few points in polling short-term if people conclude that he’s been reckless and maybe gaining him a few points longer-term once he returns to the trail. It may be that the only true game-changing scenario left would be if Biden got infected too. Let’s hope to God that he doesn’t; the country can only take so much 2020 insanity.

Joe Biden says he's had two Covid tests today after Trump and the first lady tested positive: "My wife Jill and I pray that they'll make a quick and full recovery. This is not a matter of politics. It's a bracing reminder to all of us that we have to take this virus seriously" pic.twitter.com/ZapqVmSYV6

'Everyone was freaking ... happy.' Skillset Magazine's editor witnesses his first Trump Parade and his reaction is PRICELESS (watch)

Heroes Who Took On Church Shooters Now Take On Biden

“[H]e has to at least match Clinton’s numbers among Hispanics and that looks like it’s not going to happen.”