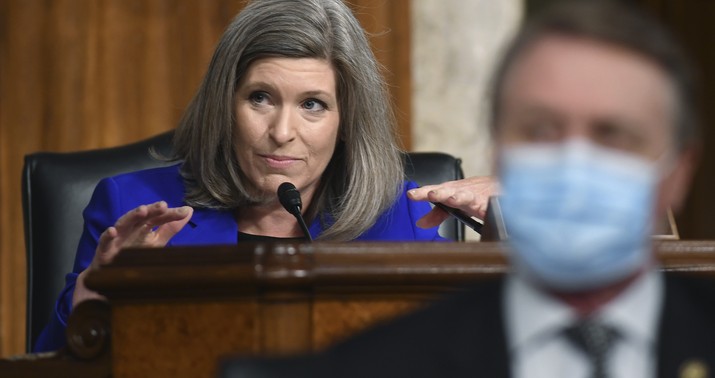 Behold the single scariest poll of the campaign to date, one which, if true, would almost certainly mean a blue tsunami is on the way.

It’s so scary, in fact, that political reporters and data nerds are sniffing at it as far-fetched, with good reason. Recent polls of Iowa have Ernst trailing Democrat Theresa Greenfield by two or three points. Not, uh, 12.

The number that jumps out here is the split among men. Trump won men in Iowa by 28 points en route to an easy victory in the state. The GOP hasn’t lost 35 points among men there since then, needless to say.

The Nexstar Iowa 2020 RABA Research Poll shows Greenfield is leading Ernst 51% to 39%, a 12 point lead, as the campaigns head into October.

The poll found support for Greenfield across the board. She lead among men by 6% and with women by 17%.

Ernst is running for re-election for the first time. She beat Democrat Bruce Braley in 2014 by 7% on Election Day.

Greenfield isn’t up 12. The ominous question, though, is whether she might plausibly be up by half that amount. A six-point lead in Iowa would be unnervingly comfortable for a Democrat in a red state and might portend a leftward shift in other battlegrounds. On that note, here’s another new poll that’s circulating today:

Georgia has been tight for awhile but for most of the past month Trump has been tied with Biden or led narrowly. Suddenly he’s behind in the last two, the one above and the latest Quinnipiac poll, which had Biden up three. More significantly, as noted in the tweet, the last survey of the state by this pollster had Trump up seven. That’s a nine-point shift in a month. Is this the product of a bad sample too or are the electoral tectonic plates moving?

The question isn't whether Ernst is at 39% (she's not) but whether the bottom is falling out of Trump's campaign (sure looks that way) and if that would result in cascading losses for supposedly safe Republicans (it certainly would) https://t.co/cSoVXu7rhV

I mean… it's likely that some of these polls are outliers. But it's worth keeping in mind that the last two elections in which the country was in real bad shape (1980, 2008), there was a fairly sharp break away from the incumbent party in the last month of the campaign. https://t.co/cz6i4iqqfD

This week has brought some white-knuckle numbers. The worst were the pair on Tuesday that found Trump down nine in Pennsylvania, a state that looks to be about as crucial for him as Florida is. But almost as bad was the one yesterday showing Trump and Lindsey Graham both even with their opponents in South Carolina, of all places. That’s why Alberta is wondering about the bottom falling out. If the close races are suddenly in solid red states like SC and Iowa, the true battlegrounds like Pennsylvania won’t see much of a battle.

*If* the bottom is falling out then we’re left with a question of why. There are various possibilities — the Ginsburg vacancy being filled, the tax return news, Trump’s “we’ll see” answer when asked about peacefully transferring power, the debate fiasco. But maybe it’s as simple as Silver suggests. When people go to the polls in a very tough year for America, there’s a late break towards the out-party as people opt for change.

There’s one other indicator working against Republicans. I predicted in an earlier thread that the insane burst in Democratic fundraising after Ginsburg’s death might mean that Biden ended up raising $500 million in September. The record for money raised in a single month is currently the $365 million he received in August. How much higher than that might he go? Bloomberg is reporting tonight that, while they don’t yet have numbers, the Democrat’s September fundraising did exceed August’s.

Democratic presidential nominee Joe Biden’s campaign set another fundraising record for the month of September, surpassing the unprecedented $364.5 million it raised in August, according to three people familiar with the matter.

An exact number was not yet available, but the people said the campaign and the Democratic National Committee brought in more money in September than August, which was the biggest campaign fundraising month in the history of modern presidential politics…

Some of the money raised came in late. Biden raised $31.5 million in just over 24 hours after Tuesday’s raucous presidential debate, according to Rob Flaherty, the campaign’s digital director, with $10 million of that amount coming between 9 p.m. and midnight.

Biden had $466 million in cash on hand at the start of September. Conceivably he could have spent every dime of it and still ended the month with more cash than he began with. We’ll need to wait for more info to know.

What takes this from merely insane to off-the-charts bananas is that Democratic donors aren’t funneling all of their contributions to Sleepy Joe. They’re spreading their money around enough that Democrats downballot are setting fundraising records too. Beto O’Rourke became a sensation in Texas two years ago when he raised $38 million in a single quarter, thanks to his own charisma, tons of fawning media coverage, and the fact that he was pitted against one of the left’s least favorite Republicans. Today, though, North Carolina Dem Cal Cunningham announced that he raised a Beto-esque $28 million last quarter even though hardly anyone nationally has heard of him or his opponent, Sen. Thom Tillis. Two other Dem candidates, Sen. Gary Peters of Michigan and Raphael Warnock, also raised over $10 million last quarter. God only knows what Graham’s opponent in South Carolina and Susan Collins’s opponent in Maine took in.

These numbers are so big for Senate races, especially Cunningham’s freakish haul, that I find myself asking the same question as Benjy Sarlin. Is there anything left for Democrats to spend money on?

Is it even possible for Senate candidates to spend this kind of money? Like at some point is there just a hard limit on human attention you can command with ads and field staff? https://t.co/PO1r8CywLm

Maybe the financial advantage won’t matter much at the end of these races, then. Every buck that could conceivably be spent to gain an advantage has already been spent three times over. But if you’re Mitch McConnell, the fact that your caucus is facing a money deficit on top of a leftward trend has to make you think that your majority isn’t long for this world. All the more reason for them to focus singlemindedly on confirming Amy Coney Barrett before the election. If in fact a blue tsunami arrives, the politics of doing that in a lame-duck session would be bad.