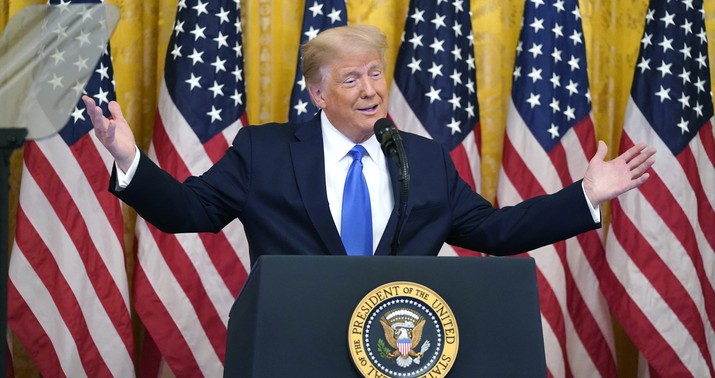 The reason for the alarm bells is that, until recently, Pennsylvania polling was still tight. As recently as September 6, Biden led there by an average of just 3.2 points. That made PA a noteworthy and even potentially decisive outlier in the Rust Belt, where Michigan and Wisconsin have remained fairly solid for Biden. The conventional wisdom among politicos is that MI and WI are a reach for Republicans in 2020 but that Pennsylvania might still answer the bell, especially with the GOP having gained meaningfully on Democrats in registering voters there.

And as long as PA is still on the board, Trump has a shot at winning. Losing Michigan and Wisconsin would drop him to 280 electoral votes from his 2016 haul. Losing the second congressional districts in Maine and Nebraska, which seems likely at the moment, would bump him down a bit further to 278. His margin of error at that point is zero, but it’s not hard to imagine a systemic polling error across all battlegrounds that’s underestimated turnout among Trump voters by a few points. That might not be enough to keep MI and WI red but Florida, North Carolina, Georgia, Texas, Iowa, and Ohio are all close enough right now that a shift of a few points to the right might hand all of those states to Trump again. Even Arizona, which had seemed to be drifting away from him in late summer, has had some encouraging polling lately:

The wild card is Pennsylvania. Even if Trump pulls another inside straight a la 2016 and wins nailbiters in all of the other states named above, losing PA along with MI and WI would be enough to give Biden the presidency. Realistically, there’s nowhere for Trump to make up Pennsylvania’s electoral votes by flipping a blue state either. He could flip Nevada, but that’s only worth six, which would leave him at 264 to Biden’s 274. If he flipped Nevada *and* Minnesota, that would get him back up above 270 despite losing Pennsylvania — but Minnesota doesn’t look competitive at the moment, with Biden enjoying an average lead of 9.4 points.

All of which is a long way of saying that PA is essentially as much of a must-win as Florida is. (And even Pennsylvania wouldn’t guarantee Trump a victory if Biden pulled an upset in, say, Ohio. The president needs to win *all* remaining red battlegrounds if Michigan and Wisconsin are off the board.) Hence the alarm bells today: Two well-regarded polls published in the last 24 hours suddenly have Biden up nine points in PA. The Times has it 49/40 based on some familiar electoral dynamics: Biden is killing it with women and college-educated white voters and he’s holding down Trump’s margins with rural voters and whites without a degree. There may not be a lot of undecided voters available to him either.

Among Pennsylvania voters who are not registered with either major party, Mr. Biden held a commanding lead, 48 percent to 27 percent, suggesting Mr. Trump is not growing his potential electorate.

Another warning sign for the president: Nearly half of all voters, 47 percent, “strongly disapprove” of how he handles his job as president, evidence of entrenched opposition with five weeks until Election Day and voting already underway in Pennsylvania. A smaller share, 32 percent, strongly disapproved of Mr. Biden.

ABC/WaPo has the race 54/45 and tells a similar story. Women, suburbanites, whites with degrees are all boosting Biden. Biden also enjoys a small but meaningful crossover vote, taking eight percent of Pennsylvania voters who supported Trump in 2016. Trump’s winning just one percent of Clinton 2016 voters by contrast. More:

The gap is narrower in the suburbs, but notable nonetheless, given that suburban residents account for six in 10 likely voters in the state. The race is essentially a dead heat among suburban men — 51 to 49%, Trump-Biden — while it’s 59 to 41%, Biden-Trump, among suburban woman. That produces an overall result in the suburbs of 54 to 45%, exactly matching the race statewide.…

Hillary won the Philadelphia suburbs by 13 points. Biden leads there in this poll by … 38. In the Times poll, Biden held Trump to a 62/23 lead *among Republicans* in Philly, its suburbs, and Allegheny County (which includes Pittsburgh). That’s despite the fact that Trump enjoys 53 percent approval statewide on the economy, with voters favoring him slightly over Biden on who’d best handle the economy going forward. It’s hard to be an incumbent who’s widely seen as better for voters’ bottom line and trail this badly, especially among higher earners in places like the suburbs, but darned if he hasn’t done it:

I think that’s it. It’s not that college-educated voters believe Biden would be better than Trump on every issue (although he’s rated more highly on the pandemic), it’s that they’re tired of the daily circus. If that’s true, you’re left wondering what Trump could say or do at tonight’s debate, realistically, to change their minds. A Biden “senior moment” might make voters reconsider but Trump’s going to be Trump. If you’re against him because of his persona, three more sustained doses of it on a national debate stage isn’t going to make you like it again.

As for why we should trust either of these new polls, one way to look at PA is by looking at it in the context of the broader map. It’s possible that there’s a general trend towards Biden nationally and that Pennsylvania will buck that trend, but it’s unlikely. For one thing, Table 1 here shows that Biden’s statistical “predicted margin” outperforms Clinton’s 2016 margin in every last state in America. All 50. (He slightly underperforms in D.C.) That doesn’t sound like a recipe for Trump winning every battleground except Michigan and Wisconsin, particularly considering how closely the swing-state races were last time. In fact, Cook Political Report shifted Iowa and Ohio from “lean Republican” to toss-up this morning because of how tight the polling in both states has been lately.

But even ignoring the national picture, the most salient fact of Pennsylvania polling lately is that Trump seems to have a ceiling of 45 percent. He hasn’t topped that number in any of the last eight polls — not even Trafalgar, which usually has much better numbers for him than the competition does. Forty-five percent isn’t enough to win even in a race with a strong-ish third-party candidate. In a race that’s essentially a two-man field, it’s a red alert. There may be a polling error that’s underestimating him right now, but the odds that it’s on the order of five percent are small. He needs a big win tonight.