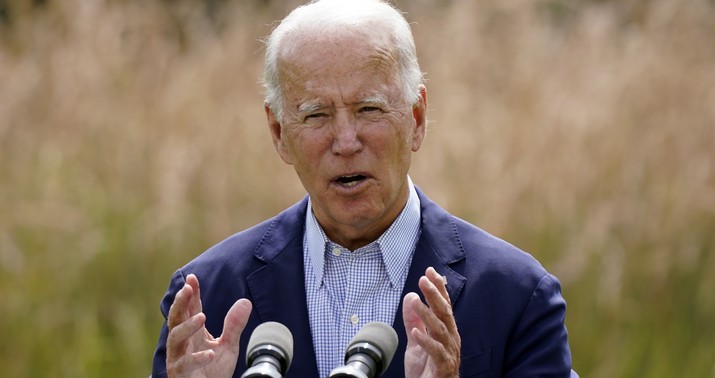 A bad look, especially as Trump’s schedule becomes more active. The president did two events yesterday in Ohio and has another today in Pennsylvania. He’ll be in Florida on Thursday and back in Pennsylvania on Saturday night.

Also, does Biden really need to be hosting “virtual” fundraisers at this point? He crushed Trump in donations last month and the sudden Ginsburg panic this weekend among Dems has triggered an unprecedented avalanche of cash. It’s hard to believe this is a good use of his time with exactly six weeks to go until Election Day.

It’s true that he’s “lost a step” in the past five years but most of the attacks from the GOP along those lines have been overhyped. (Self-defeating too, since they lower expectations for Biden’s public appearances.) A 9 a.m. lid makes me wonder if there’s more to it than we know.

Then again, Biden *does* have extra incentive to be off the trail this week, and I don’t mean wanting to duck reporters’ uncomfortable questions about Court-packing, although that *is* an incentive. Erick Erickson is mindful of the calendar:

Y'all, Biden is not hiding this week. He is prepping for the debates. No need to spread conspiracy theories. He knows he's got to show he can go for hours against Trump.

If he’s using the time for debate prep, which his opponent is not, then he’s probably doing the right thing. The debates are a rare make-or-break moment for Biden during the campaign given suspicions about his health. Much has been written about the “break” side of that: If he has an obvious “senior moment,” does that reset the entire race (to the extent the Ginsburg vacancy hasn’t done so already)? But not enough has been written about the “make” potential. If Biden goes out and nails the first debate against Trump, does that shake loose some of the few remaining undecideds or maybe even a few Trump-leaning independents and make his national lead effectively insurmountable?

The bar for doing that isn’t high. Trump isn’t going to display a strong command for relevant facts, especially if he’s not preparing much. Maybe Biden’s spending this week brushing up on policy detail in anticipation of next Tuesday night. The more he sounds like he really knows what he’s talking about — and Trump doesn’t — the easier it is for him to “win.”

Still, Democrats are nervous. One bad slip by Sleepy Joe and Trump’s chances of four more years as president could improve meaningfully:

Almost every Democratic operative I’ve spoken with in the past few weeks remains petrified that Biden is going to bungle the debates in a way that costs him the election—perhaps by looking old or confused, confirming the worst paranoia and conspiracy theories about him being unfit for the job. They see the debates as Biden’s best chance to blow an election that, based on the current polls, seems like his to lose…

I asked Reines, with all the time he’s spent studying Trump, what he would do if [he played Trump again in debate prep for Biden]. He told me he would go at Biden by saying early on that “everyone can see Biden is losing the debate,” and then push the idea that Biden wasn’t physically or mentally well. Reines said he’d include lots of swings at Biden’s son Hunter, whose business dealings in Ukraine prompted the phone call that led to Trump’s impeachment.

“It is possible to be a terrible debater and be very hard to debate at the same time,” Reines added later. “And Donald Trump has gotten harder to debate—it is harder to understand him, it is harder to follow him, because it’s just one big sequitur; he’s telling so many lies, it’s impossible to think that you alone are going to fact-check him.”

Even if that’s what Biden’s doing today off the trail, how many hours per day can he possibly devote to it? Full-day debate cramming should logically happen this weekend, or on Monday. What’s keeping him from doing, say, four hours of prep this morning and then a speech later this afternoon in Florida?

Here’s Trump a few nights ago hallucinating about a “shot in the ass” Biden’s supposedly going to get before the debate on Tuesday to rouse him mentally, not the first time he’s tried to raise expectations for his opponent by accusing him of being on drugs. (Interestingly, some longtime Trump-watchers believe the president is unusually prone to projection.) Exit question: If Biden needed a drug to do the basics of campaigning and had that drug onhand, wouldn’t he be out on the trail in swing states today?

President Trump says he's going to ask Joe Biden to take a drug test before debate: "Both of us. I'll take it, he'll take it." pic.twitter.com/E6Ud4nfTFG