Is Lindsey Graham seriously in trouble in his South Carolina Senate race? 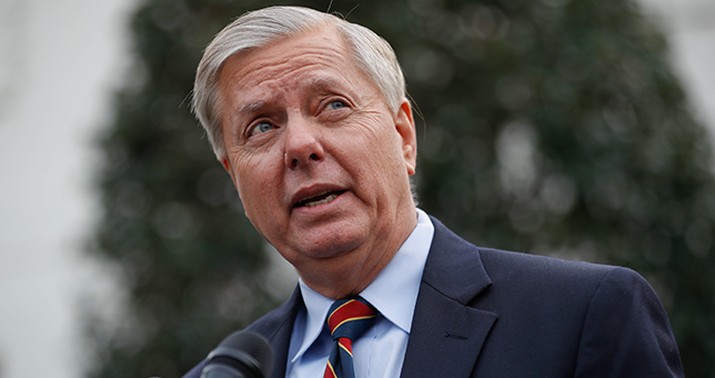 I continue to think this race is fool’s gold for Democrats. So does RealClearPolitics, which doesn’t include South Carolina in its list of Senate battlegrounds even though four polls taken there since early August have the race between Graham and Democrat Jaime Harrison within a point or tied. What’s the argument right now for treating the Colorado race between John Hickenlooper and Cory Gardner or the Arizona contest between Mark Kelly and Martha McSally as worth watching but not Graham versus Harrison?

The reason I think it’s fool’s gold is because South Carolina is still reliably red, if not as blood red as it was 10 years ago, perhaps. Susan Collins is in deep trouble in Maine because she’s fighting on blue terrain. Not Graham, who’ll also benefit from having Trump at the top of the ticket this fall.

And Graham has another thing going for him, as this new survey from Morning Consult notes. He’s the chairman of the Senate Judiciary Committee at a moment when we’re about to embark on the nastiest Supreme Court confirmation fight since, well, 2018. That’ll give Graham many opportunities to impress otherwise wary South Carolina Republicans watching the hearings from home by seizing opportunities to grandstand. And since confirmation of the nominee is all but assured, he’ll also get some credit from righties for shepherding her through the process. In a race this tight — with Graham surprisingly having trouble consolidating his own base — that’ll probably get him over the top.

In the latest Morning Consult daily tracking, conducted Sept. 11-20 among 764 likely South Carolina voters, the race was statistically tied, 46 percent to 45 percent, consistent with the state of the contest since daily tracking began in mid-July. Harrison and Democratic presidential nominee Joe Biden both have 95 percent support among Democrats, while independents are split on the two races: Harrison and Graham are even at 39 percent, and Trump’s lead over Biden, 44 percent to 40 percent, in the presidential race is also within the sample’s margin of error.

Graham’s weakness compared to Trump in South Carolina polling has so far appeared to come mainly from Republican voters: While Trump has support from 93 percent of Republicans, Graham has support from 84 percent in the same poll — making him one of the worst-performing GOP incumbents up for re-election this cycle among voters from his own party…

[F]or Harrison to be successful, strategists say, it’s not just about turning out moderates in the suburbs, but also depressing support for Graham among Trump voters, whether they vote for Harrison, sit out the Senate contest or check the third-party box for the little-known Constitution Party candidate, Bill Bledsoe, as several Democrats separately suggested.

The last Morning Consult poll of South Carolina taken in early August found the same weird quirk, with Graham pulling just 81 percent of the Republican vote at the time versus Trump pulling 92 percent. That’s strange to me, as Graham’s political identity since 2017 has consisted of two things — reliable Trump sycophancy and ardent support for Brett Kavanaugh — that should have eased misgivings about him among Trump voters. Who are the Republicans in SC who are preparing to turn out for the president but remain a little too squeamish about his loyal servant Lindsey (for now) to commit to him? Are they diehard border hawks who remember the pre-Trump “Grahamnesty” era? Do they resent Graham for not doing more with his Judiciary Committee power to investigate Trump’s enemies? I don’t get it.

The fact that it’s so hard to grasp suggests that it’s ephemeral. In the end, most everyone believes those reluctant Republican voters will hold their noses and vote for Graham, especially after a month of him being a good soldier on TV for the party’s newest SCOTUS nominee. Having South Carolina opt for Trump on Election Day and Jaime Harrison for Senate would be one of the more bizarre cases of ticket-splitting in the last century of American politics. And for what it’s worth, Jake Tapper’s sources are whispering to him that the public polling is wrong. The Graham/Harrison race is close-ish, but Graham has a lead:

My understanding is Graham’s polling tracks closely with Trump’s in the state, which is lower than his 2016 margin but still not as close as public polling would suggest. FWIW

So this is probably fool’s gold for Harrison and his party.

I can think of two X factors that might make the race a true toss-up. One is the simply mind-bending amount of money Democrats have raised since Ruth Bader Ginsburg’s death on Friday. For the moment they have a license to print their own currency. How long that license will last is unclear, but if Harrison has a plan to move indies and soft Republicans towards him in South Carolina, money should be no object over the next six weeks in making it happen.

From Alaska to Maine to North and South Carolina, Democratic strategists working on Senate campaigns described a spontaneous outpouring of donations the likes of which they had never seen, allowing Democrats the financial freedom to broaden the map of pickup opportunities, or press their financial advantage in top battlegrounds already saturated with advertising.

By Monday, Democratic contributors had given more than $160 million online through ActBlue, the leading site for processing digital donations. ActBlue broke one record after another — its biggest hour in 16 years, its busiest day, its busiest weekend — after Justice Ginsburg’s death, with an estimated tens of millions of dollars going toward efforts to retake the Senate, where the acrimonious confirmation fight to replace Justice Ginsburg will occur.

To put that in perspective, Harrison has been considered one of the most successful fundraisers in this year’s crop of Senate challengers, hauling in a “massive” $10 million in the month of August. But some Democrats have raised nearly that much in the last four days alone. Cal Cunningham of North Carolina has pulled in $6 million since the Ginsburg news broke, with the NYT claiming that Sara Gideon in Maine, Mark Kelly in Arizona, Amy McGrath in Kentucky, and, yes, Jaime Harrison in South Carolina were all believed to have raised even more. (They haven’t released numbers.) Graham went on Sean Hannity’s show last night to plead for donations, knowing that he’s about to be hit by a freakish tsunami of Democratic spending in his race. I tend to think campaign spending, especially spending on ads, is overrated as a way to move votes (see, e.g., Mike Bloomberg), but in a race that was already tight? I don’t know.

Graham better hope that his theatrics at the SCOTUS confirmation hearing produce a similar reaction from Republican donors. GOPers are going to pony up once someone is named, but their urgency after decades of Republican control of the Court and two prior Trump appointments probably won’t match Democrats’. We’ll see.

The other X factor created by the Ginsburg vacancy is an opportunity for Harrison to highlight Graham’s singular hypocrisy in vowing in 2018 that Republicans would hold open a SCOTUS seat this year if one came up just as they did when Scalia’s seat went vacant in 2016. I can’t think of another Republican offhand who promised more than once, on camera, that a 2020 vacancy wouldn’t be filled, with no caveats about divided government, etc. Harrison is already leveraging that in attacks against Graham, as you’ll see below, with ads highlighting his flip-flopping surely soon to come to South Carolina TV. Maybe it won’t matter. Certainly most or all Republicans in South Carolina won’t fault Graham for his hypocrisy in deciding to confirm Trump’s nominee now. But there might be a cohort of independents who were leaning red or progressives who weren’t motivated to turn out who’ll watch this and decide that Graham’s cynicism, in which he lied to their faces repeatedly about how he’d proceed in 2020, just doesn’t pass the puke test anymore.

My grandpa always said that a man is only as good as his word. Senator Graham, you have proven your word is worthless.pic.twitter.com/CvIDjHlWY8

Wargaming the Electoral College: Can BIDEN Thread the Needle to 270? (Yes, Biden)