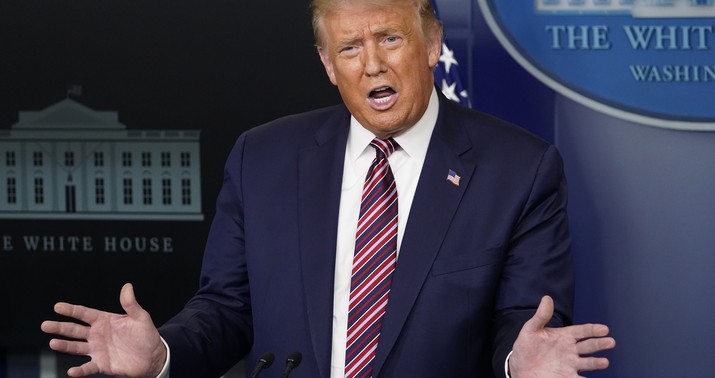 My headline makes sense upon reflection, but it’s so, so hard to watch the adulation of Trump among Republicans day to day and not come away believing that it’ll be utterly infuriating to them if he loses. He’s worshiped, engulfed by a populist cult of personality. And he’s spent months laying the groundwork to claim that if he loses he’s necessarily been cheated. How could defeat produce any other reaction among his fans besides rage? Plus, righty views of the modern Democratic Party are borderline apocalyptic. 2016 gave us the idea of the “Flight 93 election,” right? Either we win or the ship of state crashes, killing everyone aboard. For the modern GOP, consumed as it is with changing demographics and judicial appointments, every election must be won or it’s the end of America as we know it. If Trump loses, then, “anger” logically seems like the only possible response.

Republicans’ hyper-investment in Trump is borne out too in polling that shows his voters are much more enthusiastic about their candidate than Biden voters are. Ask a Trumper if they’re voting for him or against Biden and you’ll get something like 66/33. Ask Biden voters the question in reverse and it’s 33/66. If Trump has a cult and Biden has a “meh, he’s okay” contingent, obviously Trumpers should be angrier if their candidate loses.

But reflect for a minute and you’ll see why it makes sense that Dems will be angrier if Biden loses. As much as the populist right adores Trump, Democrats across the spectrum detest him. They’re every bit as enthusiastic as righties are — *against* Trump, not for Biden. Of course they’ll be irate if he wins again. There are other dynamics about the election as well that point to greater lefty rage if they fall short. For starters, if Republicans don’t get a second term out of Trump, at least they’ve had four years and two Supreme Court appointments. The left has been shut out of power since 2016 so their exasperation has been building. Meanwhile, the polling all year has favored Biden, often by gaudy margins. For Trump to win in the end would mean they’d been deluded into a false sense of confidence for the second presidential cycle in a row. On top of all that, Trump is highly likely to lose the popular vote even if he squeaks out another electoral college win. To lose two elections despite their candidate getting the most votes would drive liberals around the bend.

And then, of course, there’s the fact that he openly signals his desire to make it harder for Americans to cast their ballots, clearly in the hope he’ll benefit on Election Day.

I mean, some of these people are openly fantasizing about the Chairman of the Joint Chiefs of Staff evicting him from the Oval Office on Inauguration Day. If that doesn’t signal blind rage, I don’t know what does.

Pew has numbers that confirm the gap:

That’s a little confusing at first sight, but the bottom line is that 37 percent of Trump supporters say they’ll be angry if Biden wins versus 59 percent who say they’ll be disappointed. Among Democrats the numbers flip: 61 percent of Biden supporters say they’ll be angry versus 37 percent who say they’ll be disappointed. Note that in 2016 the numbers were identical for the two parties, which may have been crucial to Trump’s victory. A lot of Trump voters were angry at the thought of a Clinton presidency, which might have helped them overcome their aversion to Trump. This year Biden just doesn’t inspire the same fear and loathing on the right, whereas Trump 2.0 inspires even more fear and loathing on the left than Trump 1.0 did four years ago.

Here’s a fascinating gloss on that from the same Pew poll:

I’m intrigued by the big spike among Republicans from 2016 to 2020. The flat trend among Democrats makes sense by comparison: They weren’t thrilled with either Clinton or Trump as their options four years ago, and given the lack of enthusiasm for Biden, they’re not real excited about having him and Trump as their choices this year. But what does the Republican spike mean? Possibly it means that, as time has passed, some of the righties who weren’t thrilled to have Trump as their choice in 2016 have taken a shine to him. Or, more ominously, it means that most of those people have since left the party and now what’s left among the “Republican” group is smaller and much Trumpier than it used to be.

But there’s also a possibility that the Republican spike is more a reaction to Biden than to Trump. That is, maybe so few GOPers said they were satisfied with the candidates four years ago because they were disgusted with Hillary. Now that she’s been replaced with a more likable, less objectionable Democrat, Republican satisfaction with the choices on the ballot has shot up. That could also be ominous for Trump, especially among those center-righties who weren’t keen on him to begin with.

Let me give you two more snapshots from the same poll, just because. Look at the gap between the parties on whether the coronavirus outbreak is “very important” to their vote this fall. By any rational measure, COVID should qualify as an important issue. But Republicans understand that that’s not a matter on which Trump has performed well, and therefore…

Democrats are more than twice as likely as Republicans to say COVID is very important. Meanwhile, and maybe relatedly, here’s a list of issues on which each party leads. Trump’s best issue is perennially the most important one: The economy.

The partisan narrative lines for the election are thus drawn, and have been ever since the big reopening push in April, I think. Democrats want this to be an election about the virus response, for obvious reasons, and Republicans want it to be an election about the economy. But here’s the wrinkle: Despite the GOP’s comfortable lead on the economy in Pew’s data, Trump still trails Biden by eight points overall among registered voters. Biden’s at 53 percent here, which is a daunting number. It’s hard to believe POTUS can win a second term with the Democrat pulling a clear majority of the popular vote.

All hope’s not lost, though. I’ll leave you with this number from Fox News’s latest poll, which has Biden leading nationally by seven, 49/42. Fox also asked people whom they thought their neighbors were voting for, and got a … different result. Why does that matter? Because Trafalgar’s pollster, Robert Cahaly, has been using that same question to try to suss out “hidden” Republican voters with amazing results in some races since 2016. People might be shy about telling a pollster whom they’re really leaning towards, but let them off the hook by asking them about their neighbors instead and maybe they’re a bit more candid. So here you go. Make of it what you will.

Kamala Harris Wants To Ban Guns, But She Doesn’t Want To Talk About It

Libs Are Already Threatening to Do This Over Trump's SCOTUS Nominee