Hmmm: New poll shows Trump gaining ground on Biden since May — in Minnesota 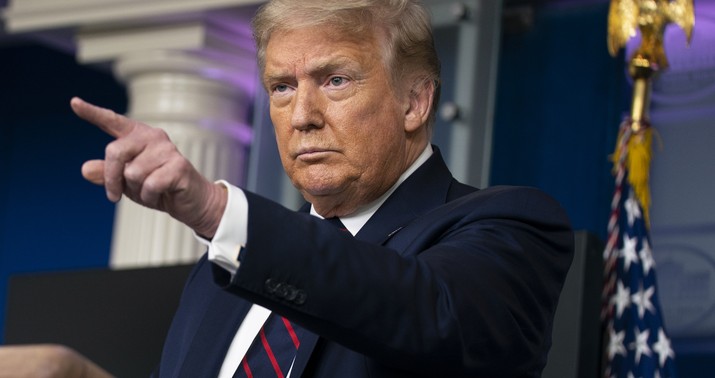 I wouldn’t call this a “good” result for Trump, as voters have moved towards Biden since late May in 11 of the 12 states polled.

But the one state in which they’ve moved towards Trump is interesting.

Especially since there are scenarios, albeit a bit far-fetched, in which that state decides the election.

Needless to say, if those Morning Consult numbers are accurate, Trump and the GOP are headed for a wipeout this fall. In particular, Biden leads by seven points or better in the three key Rust Belt states that propelled Trump to victory in 2016. If Biden wins those plus all of Hillary’s states, he’s the new president. Simple as that.

But that’s the interesting part. The one state that’s grown more pro-Trump since May happens to be a Hillary state. It’s Minnesota, which the president came within a point and a half of winning four years ago. Give Biden Michigan, Wisconsin, Pennsylvania, and every Hillary state *except* Minnesota and … Trump wins a second term, by the narrowest of margins. In fact, if we assume that “shy Trump voters” are worth, say, four extra points for POTUS in every battleground, the election as captured in the Morning Consult numbers would be very close. Biden ends up winning, but only because his victory in the otherwise reddish state of Arizona would offset his defeat in the bluish state of Minnesota, with the Rust Belt delivering the electoral votes he’d need to get to 270.

If Trump could figure out a way to hold Arizona and pick up Minnesota, though? Democrats could rebuild their “blue wall” in the midwest and they’d still lose. Minnesota is potentially very important.

And Morning Consult isn’t the only pollster to find the race there close lately. Trafalgar, which famously caught Trump’s surge in the Rust Belt shortly before Election Day 2016, has him within striking distance:

Fox News’s recent poll of Minnesota has Biden waltzing to victory there with a 13-point lead but no one wants to bet heavily against Trafalgar given their track record. Their pollster, Robert Cahaly, believes he’s able to detect “shy Trump voters” that other pollsters routinely miss by looking for people who’ve been inactive in recent elections and asking his sample both whom they’re supporting and whom they think their neighbors are supporting. That’s Cahaly’s way of trying to sniff out which people are probably voting for Trump but are afraid to say so to a pollster. If you say you’re voting Biden but you think your neighbors are voting Trump, that’s a hint that maybe you’re not being honest (or will come around to your community’s view in the end).

Within the last six weeks or so, at a time when most pollsters have watched Biden approach landslide margins in swing states, Trafalgar has had him up by one point in Michigan, Trump up by one in Wisconsin, and a dead heat in Florida. They’ve also put Trump within five of the lead in Pennsylvania and now Minnesota at a moment when virtually everything that could be working against him politically is working against him politically. If Cahaly’s right about the race, Trump is very much alive right now; all he’d need is a break or two before November and victory would be within reach. If Trafalgar nails the presidential contest a second time while other pollsters are predicting a Republican wipeout it’ll be an all-time legend of the industry.

And so the question: Why? Why is Minnesota trending towards Trump when every other battleground has inched towards Biden in Morning Consult’s polling? The obvious answer, I think, is crime. Between the explosion of violence in Minnesota since the George Floyd protests began and the traction the “defund the police” movement has gotten there vis-a-vis Minneapolis PD, swing voters may be more receptive to the “law and order” option on the ballot than they are in other states. That’s big news for Trump since he’s been hammering his law-and-order message nationally lately, both rhetorically and via actions like building up the federal presence in Portland. If the violence spreads to other cities, we may see a “Minnesota effect” in other battlegrounds. And suddenly Biden’s landslide won’t be such a landslide anymore.

The GOP had better figure something out either way because it’s not just the White House they’re at risk of losing right now. I’ll leave you with some other new data from Morning Consult. Note the margin in Arizona.

From From Butch to Beautiful: Ex-Feminists Show Off Their Transformations