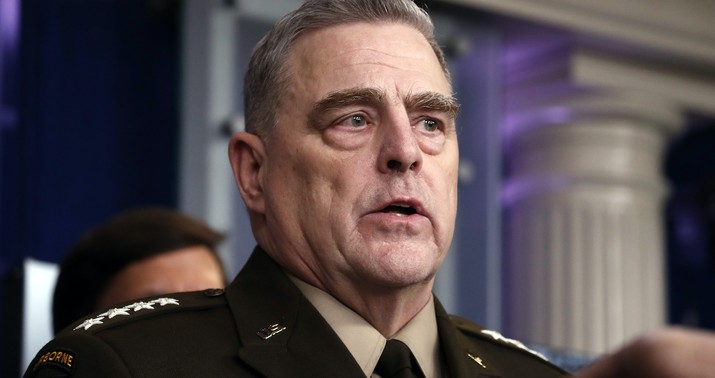 Man. If this is what it’s like in August, imagine the election hot takes circa October 31.

Michael Brendan Dougherty published a piece yesterday at NRO wondering why so many of the most hardcore Trump critics fantasize about seeing him removed from office when he’s consistently down in the polls and apt to lose his job the old-fashioned way. Democrats always chatter about cheating when they lose an election, he notes, correctly. Maybe they’re still so traumatized by the last election that they’re now gaming out “cheating on steroids” countermeasures: “I’m not a psychoanalyst, but somehow, it seems progressives have convinced themselves that 2016 and the past four years have been so abnormal that winning a normal election just isn’t cathartic enough.”

There’s something to that, as well as the fact that the ignominy of being “removed” would lend Trump a special stigma. (That was part of the rationale for impeaching him too, right? How many times did Pelosi crow that he was “impeached forever” no matter what happened during the Senate trial?) But to be fair, part of the paranoia about Trump derives from the fact that he’s very clearly already grasping for ways to delegitimize the results if he loses in November. He did the same thing in 2016 when it looked like he was headed for defeat, complaining about a “rigged” system. He was so wedded to the idea that he went on complaining about illegal aliens having voted fraudulently by the millions even after he won. This year he’s been pounding the drum about illegal mail-in ballots for months as well as alleging more subtle forms of chicanery, like the possibility that not wanting to fully reopen schools and businesses is part of some conspiracy to choke the economy so that he loses the vote.

Realistically, there’s no scenario in which he loses and accepts the results. It would need to be a mammoth blowout by Biden to convince him, and even then he might turn around and claim that the scale of defeat was so massive as to be implausible.

But saying that he’s destined to challenge the results isn’t to say that he’d try to actually pull off a coup if he lost that challenge. That’s what former colonels John Nagl and Paul Yingling imagine today in a weird open letter to Joint Chiefs chairman Mark Milley published at Defense One:

America’s political and legal institutions have so atrophied that they are ill-prepared for this moment. Senate Republicans, already reduced to supplicant status, will remain silent and inert, as much to obscure their complicity as to retain their majority. The Democrat-led House of Representatives will certify the Electoral College results, which Mr. Trump will dismiss as fake news. The courts, flooded with cases from both Democrats and Mr. Trump’s legal team, will take months working through the docket, producing reasoned rulings that Trump will alternately appeal and ignore.

Then the clock will strike 12:01 PM, January 20, 2021, and Donald Trump will be sitting in the Oval Office. The street protests will inevitably swell outside the White House, and the ranks of Trump’s private army [i.e. the camouflaged DHS agents stationed at the courthouse in Portland] will grow inside its grounds. The Speaker of the House will declare the Trump presidency at an end, and direct the Secret Service and Federal Marshals to remove Trump from the premises. These agents will realize that they are outmanned and outgunned by Trump’s private army, and the moment of decision will arrive.

At this moment of Constitutional crisis, only two options remain. Under the first, U.S. military forces escort the former president from the White House grounds. Trump’s little green men, so intimidating to lightly armed federal law enforcement agents, step aside and fade away, realizing they would not constitute a good morning’s work for a brigade of the 82nd Airborne. Under the second, the U.S. military remains inert while the Constitution dies. The succession of government is determined by extralegal violence between Trump’s private army and street protesters; Black Lives Matter Plaza becomes Tahrir Square.

Even by the standards of 2020 political fanfic, that’s some overheated stuff. I complained plenty about the camouflaged DHS officers in Portland, but if they’re the germ of a “private army” that’s somehow going to suppress resistance to Trump’s eventual coup it’s strange that there’s no evidence of that mighty force being assembled. Other elements are strange too, notes Fred Kaplan:

First, even if this were the military’s role, it would not be Milley’s. Under the Department of Defense Reorganization Act of 1986, the chairman of the Joint Chiefs of Staff serves as the principal military adviser to the president. He (or perhaps, someday, she) has no power to command, or issue orders, to any members of the armed forces. That is the duty solely of the chiefs of staff of the military services (Army, Navy, Air Force, Marines) and their combatant commanders. In other words, Nagl and Yingling sent their letter to the wrong address.

Stranger still, the president’s term doesn’t continue until the Supreme Court hears all election challenges or whatever. It expires at a specific moment, at which point someone else becomes president. If Biden is certified as the winner and Trump refuses to leave on January 20, it’d be up to Biden, not Mark Milley, to decide how to proceed. If, in a worst-case scenario, there’s no certified winner by January 20 because of court battles, then the presidency and vice presidency would be vacant and Nancy Pelosi would become president. And she would, certainly, happily give the order to the Secret Service to haul Trump’s ass out of the White House.

So why is Milley involved in this write-up at all? The only scenario in which the military would have to make a decision of its own on whom to back is if Trump went full coup and tried to get the armed forces to overturn America’s constitutional scheme and install him as a dictator. Given all the agita in the Pentagon after the Lafayette Park debacle, replete with a public apology from Milley himself for having been enlisted in the president’s stunt, the odds of the military going along with that are zero. Trump likes to imagine that his alpha-male bravado makes him hugely beloved among the troops but it ain’t the case, and between respected former commanders like Mattis unloading on him and others grumbling to the media about his antics, there’s no reason to think the armed forces would react with anything but disgust.

Nagl and Yingling surely know that better than I do. So what are they doing making a spectacle of themselves, beseeching Milley this way? Do *they* doubt the patriotism of their comrades? I don’t.

Their piece operates as a supreme example of Trump inspiring his critics to violate “norms” as easily as he does. Usually those examples are comical, like Marco Rubio getting baited into talking about hand size for a few weeks on the campaign trail in 2016. In this case we have two highly respected retired officers encouraging the military to get ready to intervene in a U.S. election if need be. “It would be as dangerous to the United States of America for the military to determine they themselves should be the arbiters of this as would be dangerous a president refusing to leave office – so the cure is as bad as the disease,” said Mattis co-author Kori Schake of Nagl’s and Yingling’s fantasy of Milley throwing Trump out on his ear. Indeed. Good lord.