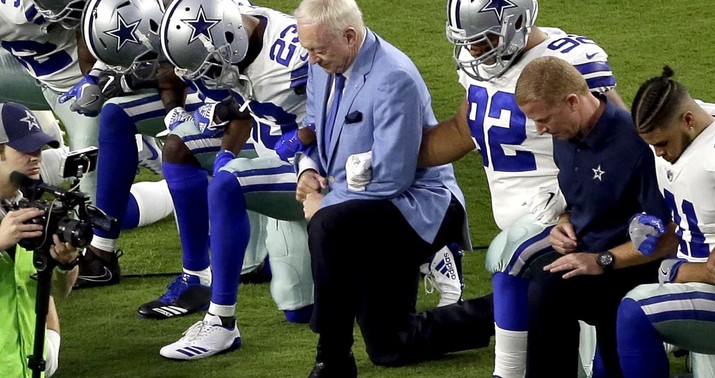 Of course it would be the g-ddamned Cowboys who decide they’re too cool to take the same social-distancing precautions as everyone else.

Almost everyone else. Given the Raiders’ franchise culture, they’ll probably pack the stands and encourage fans to cough in each other’s drunken faces as a middle finger to polite society.

The Redskins — pardon me, the “Washington Football Team” — will have no fans in the stands this year, by contrast. And no, I’m not going to make the same hacky joke about that that everyone on social media has made today.

Jones said the team will adhere to any local or state protocols regarding attendance and they don’t have a number of fans in mind at this point, but he said he thinks the size of the stadium and the number of suites make them capable of having people on hand while maintaining social distancing.

As of now, the state of Texas allows 50 percent capacity for sporting events.

AT&T Stadium has a capacity of 80,000. How do you feel about 40,000 people getting together to scream and cheer and otherwise project particles various and sundry at each other? (Possibly in an enclosed space, too. The stadium has a retractable roof.) Coincidentally, the Times reported this morning that scientists seem to have finally confirmed what most of the world has assumed for the past several months, that the live coronavirus can indeed be transmitted through aerosolized particles. And at a greater distance than six feet, too:

This time, the team collected air samples from a room in a ward dedicated to Covid-19 patients at the University of Florida Health Shands Hospital. Neither patient in the room was subject to medical procedures known to generate aerosols, which the W.H.O. and others have contended are the primary source of airborne virus in a hospital setting.

The team used two samplers, one about seven feet from the patients and the other about 16 feet from them. The scientists were able to collect virus at both distances and then to show that the virus they had plucked from the air could infect cells in a lab dish.

The genome sequence of the isolated virus was identical to that from a swab of a newly admitted symptomatic patient in the room.

The number of viral particles collected was small, though, leaving scientists with a new mystery of whether that was because hospital rooms are cleaned more often and more thoroughly than other indoor spaces or because the virus just doesn’t last long in the air. If it’s the latter then maybe there aren’t that many transmissions via aerosols after all. If it’s the former, hoo boy. Bad news for winter, when most of the country will be indoors.

Back to Texas. Depending on which indicators you look at, the situation has gotten either much better or is about to get worse, or both. The trend in confirmed cases is lookin’ good:

The trend in the positivity rate? Lookin’ … errrrrrrr:

Weirdly, that spike in positivity may not be due to a new surge of cases. As you can see in the graph, daily testing in Texas has *dropped* lately. It may not be that cases are spiking — or falling. We can’t tell at the moment which way things are moving because Texas is falling down on the job of detecting infections:

Another words — they are missing 90% of the cases

Can't really do these w/out new control measures

My suspicion is that over the next week to two, hospitalizations will rise again and deaths will soon follow

We could wait. We shouldn't. Act now

Yeah, like he says, because deaths are a lagging indicator, the trend at this particular moment in time really only tells us how infections in Texas were trending two or three weeks ago. Since the state is now flying blind via reduced testing, it could be that there’s been a new surge in cases but that it won’t show up in the death data until two to three weeks from now. Point being, the Cowboys and every other business in the state are taking an unmeasurable risk at the moment if they open up facilities to the community. Without having a reliable sense of how much spread there is, they’re potentially exposing people to a much greater chance of being infected than they think.

The hopeful counterpoint to that, summarized in this worthwhile report from MIT’s Technology Review, is that there’s certainly some degree of herd immunity happening in hard-hit states like Texas to limit the scope of future outbreaks. “I believe the substantial epidemics in Arizona, Florida and Texas will leave enough immunity to assist in keeping COVID-19 controlled,” said Seattle scientist Trevor Bedford a few days ago — before adding, “However, this level of immunity is not compatible with a full return to societal behavior as existed before the pandemic.” In other words, with true herd immunity of 60 percent or 80 percent or whatever, we could all go back to normal and the disease would slowly die out. With partial herd immunity of 20 percent or whatever we think Texas has now, we still need to practice social distancing. But distancing plus partial immunity will leave the disease to spread more slowly than it used to, which means major outbreaks become less probable.

The key point in the MIT piece is that partial herd immunity via infection is probably more effective than it would be even via vaccine because people who have been infected are more likely to be social risk-takers than people who are vaccinated in a random sample of the population. For instance, if you vaccinate 1,000 people by lottery, you’ll get a few of the idiots inclined to drink in crowded bars without masks, but only a few. Most of that cohort will still be out there, unprotected and ready to head to the pub. Whereas if you have 1,000 people who’ve developed antibodies the old-fashioned way, chances are there’ll be a *lot* of bar-hopping idiots in that group. Once they’re all recovered and ready for their next pub crawl, they’re no longer capable of being vectors for the virus. Suddenly infections at bars begin to drop dramatically, and with it the risk of new super-spreader events. Before you know it there’s a decline in transmission across the whole population.

Between partial immunity, social distancing, and the tantalizing prospect of some unknown degree of T-cell immunity, it may be that this summer’s hot-spot states realistically just aren’t capable of producing another major new wave of COVID. (Look no further than New York, which continues to generate rock-bottom daily case counts despite two months of summer socializing by locals.) The only way to produce a wave would be for residents to really let down their guard on distancing measures. So … maybe no biggish crowds at football games? I don’t know. Just spitballing here.