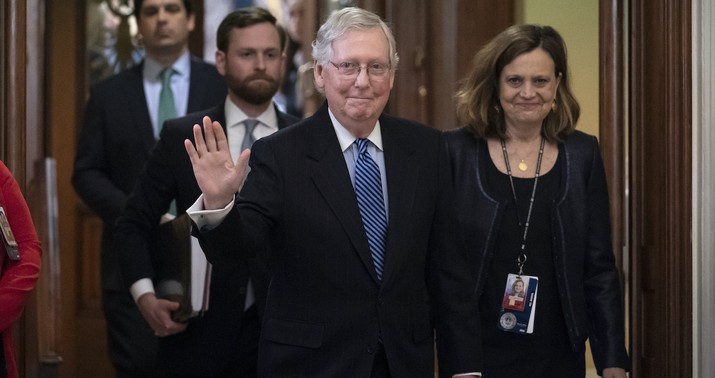 We’re not going to declare a trend based on two polls, but what’s shaping up here is a major storyline for the fall if it’s borne out by further polling.

One of the mysteries of the campaign is how many Republicans are planning to cross the aisle and vote for Biden. I’ve seen several surveys that put that number in the vicinity of 10 percent. It’s assumed — without evidence — that many or most of those voters will also end up voting for Democrats downballot. For instance, the hardcore Never Trumpers at the Lincoln Project have taken to running ads lately against GOP senators on the theory that the president’s enablers, not just the president himself, must be punished with defeat this fall. Only by teaching them a hard lesson will the GOP learn that Trumpism is a losing bet electorally for everyone complicit in it. Once they’re gone, the party can rebuild and become … whatever the hell its next phase is.

But that assumption might be all wrong. There’s no reason to think Republicans who are voting for Biden are going full scorched-earth on the entire party. In fact, some of the polls showing Trump down big to Biden have found that his job approval is higher than his vote share in the head-to-head polling. That is, some GOPers think he’s doing a reasonably good job; they just prefer Biden, all things considered. They may not be Never Trumpers at all, just basically loyal Republicans who’ve concluded regrettably that POTUS wasn’t up to the task and it’s time to go in a different direction.

Those people are potential ticket-splitters, the sorts of voters who might want a change at the top but don’t want too many repercussions from that change. Sure, fine, let’s replace Biden with Trump — but don’t you dare hand him, Schumer, Pelosi, and the AOC woke brigades a blank check to pass whatever they want before the midterms. How many ticket-splitters might we find on the Republican side this fall?

Two new polls suggest that it could be a meaningful number. Remember that Monmouth poll of Pennsylvania from this morning? Biden 53, Trump 40. That’s a big lead. But the Democrats’ lead on the generic ballot is much smaller:

A nine-point difference between the presidential ballot and the generic congressional ballot. Hmmmm.

But it’s a fluke, right? Pennsylvania is Pennsylvania. The national electorate is different. Except … according to NBC, it’s not really:

47/43 is the closest the GOP’s been on the generic congressional ballot since April 2017. Meanwhile, this same poll has the presidential race Biden 51, Trump 40, a seven-point difference from the congressional outlook. Hmmmmmmmm.

We can speculate as to why. The easy theory is that we’re looking at two outliers here. It defies obvious explanation that Trump’s party would be gaining ground during the toughest stretch of his presidency. Maybe it’s just noisy data. Another possibility is that, notwithstanding Biden’s large leads in both polls, voters’ views of him have begun to sour a bit. NBC, for instance, finds his favorable rating down from 37/38 a month ago to 34/46 now, scarcely better than Trump’s. I pointed to this poll yesterday too as evidence that voters are beginning to see Biden as more left-wing than they did before, which may be driving some support towards Republicans on the generic ballot.

But there’s another possibility. It may be that voters have grown more convinced that the die is cast for Trump in November and that there’s no path left to reelection for him. The pandemic is a fiasco, the president is who he is and won’t change, and the national polling is showing leads lately for Biden that seem insurmountable. Under those circumstances, voters may have begun to think strategically. Fine, we’ll swap in Biden — but we’re not handing the Senate to Schumer. We’ll split our tickets. That theory also jibes with the many polls showing that enthusiasm for the two candidates is asymmetric. Trump voters say they’re voting for Trump, not against Biden, but Biden voters say they’re voting against Trump, not for Biden. If this election is in fact a referendum on the president then congressional Republicans might not pay an outsized price downballot. Trump is Trump but the GOP is something distinct.

Which would be music to Mitch McConnell’s and Susan Collins’s ears.

Cocaine Mitch has a hard test coming up, though, as he tries to triangulate between Pelosi and Trump on how to help schools cope financially with the pandemic:

The White House and Senate Republicans are developing plans to prod schools to reopen by attaching incentives or conditions to tens of billions of dollars of new aid as part of the next coronavirus relief bill, people involved in the talks said Wednesday…

The White House and Republicans are debating whether to take a carrot or a stick approach with the aid, according to several officials involved in the talks, who spoke on the condition of anonymity to discuss private deliberations. Some White House officials are pushing for conditioning the aid on schools reopening partly or fully, but others involved prefer to offer incentives to schools to take steps to reopen…

Also unclear is whether the legislation will offer extra funding for schools that reopen in a certain way or will reduce the allocation for districts that do not open, said one senior Senate GOP aide, also speaking on the condition of anonymity. “There are those who would rather incentivize good behavior, and others want to punish bad behavior,” the aide said.

I think the “stick” approach would be a grave mistake under the circumstances. It’s true that parents want kids back in school *in the abstract* but lots of polling this week shows that they’re anxious about the safety risks. I posted some numbers from one a few hours ago. If the GOP comes off as wanting to punish schools for the crime of putting kids’ (and teachers’, and ultimately parents’) safety first by going slow on reopening, they’re inviting a nasty backlash. And they’d also be aligning themselves with Trump, who’s frantic to get parents back to work by reopening schools as widely as possible and whose instincts in negotiations are to play the tough guy. The “tough guy” approach here is to rhetorically grab school superintendents by the lapels and tell them to pack those kids into the classroom ASAP if they want a check this year.

“The problem President Trump has is twofold,” a veteran Republican strategist with clients on the November ballot said. “One, voters no longer trust his judgment or predictions or handling of the virus. And, two, voters believe that many of their states opened too soon, while also believing that they did so because of pressure from the president.”…

To win over these parents and put Biden on the defensive, Republican operatives say, Trump needs to stop crafting social media posts that are designed to rile up his base and treat the coronavirus as if the pandemic is receding. Instead, the president needs to show support for treading cautiously in states where COVID-19 is still spreading and show that he recognizes the fear many people are feeling because of the pandemic…

“If the president insists on making it polarizing and autocratic, he will not be rewarded,” a GOP insider said. “The suburban voter he can get with this wedge hates the my-way-or-the-highway approach, so he can’t do this that way. But he clearly has finally identified an issue on which he can find common ground with most suburban women if he will deliver it in the right way.”

Right. The way to do this is to give them the money, no strings attached, with assurances that the government wants them to have whatever they need to protect everyone’s health this fall. Along with those assurances, the point can and should be made frequently that now that schools have the funding they require, they have less of an excuse not to reopen. And of course, the public should be reminded that being out of school has its own damaging health consequences for kids: “There’s no doubt that there is more harm to a child’s health being out of school, and that encompasses nutritional health, mental health, physical health,” said Mike Pence’s chief of staff to WaPo. Get Fauci involved too in soothing the public by reminding them that Europe has had good outcomes so far on reopening schools, with the important caveat that European communities are seeing much less spread of the virus than we are right now. I think parents can be cajoled into taking a bit more risk than they otherwise might have been willing to, especially if that message is framed in terms of concern for their children’s well-being. I don’t think they can be bulled into doing so.

Trump probably can’t be convinced of that but McConnell must know it. We’ll see what he does. In lieu of an exit question, I’ll leave you with this graph of Israel’s case counts from the WSJ. It’s true that reopening schools in places where infections are low seems to usually work out. Usually — but not always.