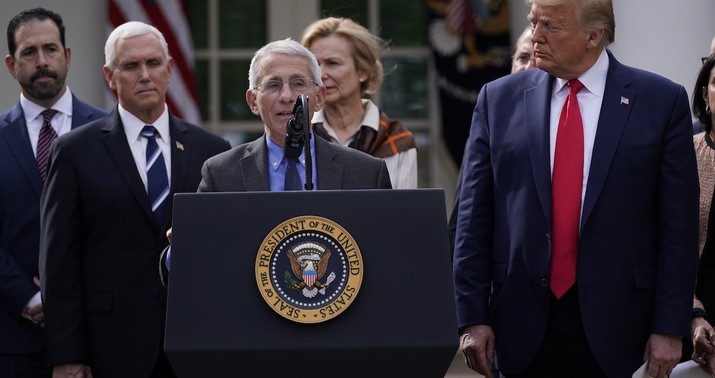 My new hot take about Fauci is that he’s made peace with the fact that our stupid country lacks the self-discipline to bring the virus under control and so he’s just hanging around at this point to make trouble for Trump. It doesn’t matter what health advice he gives to the public. Some critical mass of Americans will continue to take needless risks, perpetuating community spread at orders of magnitude beyond what Europe is experiencing, regardless of what he says. Nearly 140,000 people are dead and we’re still managing a major outbreak four months into this. The federal response has already failed beyond our worst nightmares.

It doesn’t matter what advice he gives to Trump either. He doesn’t actually give advice to the president anymore, in fact; reports lately have claimed that he hasn’t met with Trump in weeks. Even if he did meet with him, it’s clear by now that the president’s going to do what he wants to do regardless of what his experts think. Federal guidelines on how to reopen safely? Screw that, says POTUS — reopen ASAP. Universal mask-wearing to try to limit transmissions? Nah, says Trump. I’ll wear the mask when I visit Walter Reed but otherwise you’ll never catch me in one.

Staying on the job means Fauci will still get to help supervise the vaccine effort, which must be gratifying for him. But other people can do that. The data will either be there or it won’t once the clinical trials are done. He doesn’t need to rubber-stamp it. And to the extent that he might have influence in convincing the many, many, many vaccine skeptics here in The Greatest Country In The World to actually get the shot once it’s available, he could do that just as easily as a private citizen than as the head of the NIAID. They’ll still put him on TV. If he needs a job, he could go work for Bill Gates instead.

No, I think he’s hanging around because probably his only pleasure in life right now is watching his enemies inside the administration throw roundhouses at him and land them on the president instead. Maybe there’s a strategic angle to that beyond the pure schadenfreude. Maybe Fauci’s concluded that the only way to develop a more competent federal response to the crisis is with a change at the top in November. If having the White House beat up on him plays as bad politically as it seems likely to, then offering himself as a target is probably the most useful thing he can do to serve his cause.

Fauci: Well, that is a bit bizarre. I sit here and just shrug my shoulders and say, “Well, you know, that’s life in the fast lane.”

I think if you sit down and talk to the people who are involved in that list that came out, they are really, I think, taken aback by what a big mistake that was. I think if you talk to reasonable people in the White House, they realize that was a major mistake on their part, because it doesn’t do anything but reflect poorly on them. And I don’t think that that was their intention. I cannot figure out in my wildest dreams why they would want to do that. I think they realize now that that was not a prudent thing to do, because it’s only reflecting negatively on them.

I can’t explain Peter Navarro. He’s in a world by himself. So I don’t even want to go there.

Asked if he’d confronted Mark Meadows about the bizarre White House effort to discredit him, which started with sources leaking a list of Fauci’s mistakes to reporters this weekend and continued with Navarro’s op-ed last night, he said yes:

Fauci: I said that that was not particularly a good thing to do. Ultimately, it hurts the president to do that. When the staff lets out something like that and the entire scientific and press community push back on it, it ultimately hurts the president. And I don’t really want to hurt the president. But that’s what’s happening. I told him I thought it was a big mistake. That doesn’t serve any good purpose for what we’re trying to do.

He’s right that it hurts Trump. That continues to be the big mystery at the heart of this, why the White House would seek to put distance between the president and one of the few people who works for him who enjoys meaningful influence over swing voters:

Trump’s big pitch right now is that we need to reopen schools this fall. That’s key to his election strategy: We need as many kids in class as possible so that as many parents as possible can get back to work and make this economy roar. Well, Fauci largely agrees with him on that. He’s been nudging governors about reopening schools since early June, in fact. He’d be a perfect PR man for Trump to try to reassure a nervous public that it’s safe to send kids back to school, at least in communities where the spread is low. Why Trump hasn’t put him to work in that role is another mystery. Possibly he disagrees with Fauci’s community-based approach, since that would require keeping schools closed in hot spots for safety reasons and the president simply doesn’t care about that relative to getting people back to work. (Reopening schools rashly in hard-hit states, only to seed an outbreak that will force them shut again, is completely self-sabotaging.) Or maybe Trump’s at the stage of his presidency where he intends to be his own messenger on everything, including best practices on handling a pandemic.

Either way, his decision to take the lead on reopening schools has had the predictable effect on public opinion:

Note the numbers among independents. On the more basic question of whether schools should reopen at the end of summer, the public splits 39/51 (among parents it’s 45/51), with just 20 percent endorsing the idea of a full reopening in which kids attend class five days a week. Asked whether they trust Democrats in Congress or Trump more on when to reopen schools, the split is 50/32.

You know who could have helped?

So why attack Fauci? Either the White House doesn’t care about basic politics anymore and has taken to simply lashing out at its enemies at whatever political cost or they’ve convinced themselves that the Republican base is large enough to singlehandedly deliver a second victory to POTUS this fall. Not all Republicans dislike Fauci — 46 percent of GOPers said they trust him to make good decisions on reopening schools in that last graph — but MAGA Nation does. Maybe the White House is once again going all-in on pandering to people whose votes are already completely assured in November.

One former White House official was deeply critical of Navarro’s decision to speak out against Fauci in the op-ed, describing him as having “no respect for the chain of command” and as “one of the worst leakers in the administration.” The person also said Navarro believes “he is always the smartest person in the room even on issues far removed from his expertise such as medicine and infectious disease.”

“This is the sort of thing that would get you fired in any other White House. And the White House and people in the president’s orbit should be training their fire on one thing and one thing only: Joe Biden. It’s asinine,” the former official said.

That’s one very basic sensible reaction to the attacks on Fauci. Every minute wasted fragging your own guys is a minute not spent attacking Biden. But here’s another: If the pandemic is the gravest threat to Trump’s presidency, the most elementary thing he can do to improve his electoral chances is not gratuitously pit himself against a public figure whom voters trust uniquely to handle that issue. I think the president understands that on some level, which is why he hasn’t taken any hard shots at Fauci himself, but it’s impossible to believe that Navarro, Scavino, and the other leakers circulating oppo on Fauci are acting completely autonomously and against Trump’s will. If he were sincerely annoyed at this, there’d be consequences for them. If there aren’t any, draw your own conclusions.

Before departing the White House, President Trump was asked what he thought of trade adviser Peter Navarro’s op-ed where he attacked Dr. Anthoney Fauci. President Trump said, “he made a statement representing himself, he shouldn’t be doing that.” pic.twitter.com/aQ20EZDCFI