Republicans nudge Trump: Maybe dial it back at these daily briefings 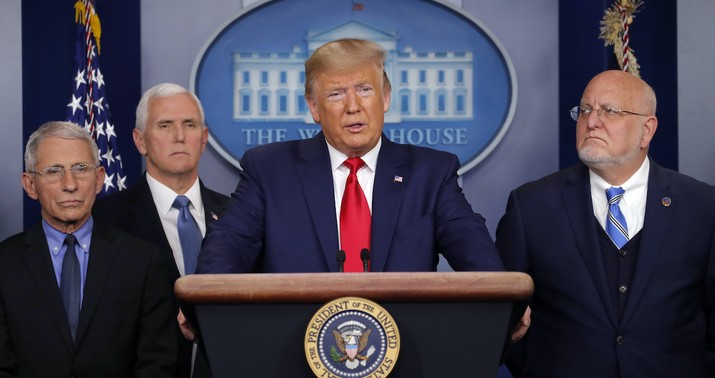 There was an idea kicking around among some Trump critics a few weeks ago that cable news networks should decline to air his part of the daily briefing. They could carry Pence, Fauci, and Birx live, but because the president is prone to self-contradiction and misinformation, his remarks should be edited and aired on tape delay as a sort of public service.

Letting news bureaus edit politicians for “accuracy” in lieu of live coverage would set a dangerous precedent, needless to say.

But reading this, I wonder how many Republicans in Congress would prefer that system, at least in this narrow case. It’d be a win/win for them. Privately they’d be pleased that Trump would no longer be able to damage himself, and them, by ranting in front of a huge audience about the press or Pelosi or whoever at what’s supposed to be a somber daily update on a pandemic that’s killing thousands of Americans daily. Publicly they’d get to act indignant and rail against the liberal media for its highly partisan act of censorship.

The networks haven’t censored him, though. CNN has come the closest by only going live to the briefings when the Q&A portion begins, but that’s when the president is as at his rantiest. And so Republicans have to resort to whispering to Trump behind the scenes that he’d fare better politically if he let Pence, Birx, and Fauci do most of the talking — knowing that there’s zero chance he’ll take their advice.

As unemployment soars and the death toll skyrockets, and new polls show support for the president’s handling of the crisis sagging, White House allies and Republican lawmakers increasingly believe the briefings are hurting the president more than helping him. Many view the sessions as a kind of original sin from which all of his missteps flow, once he gets through his prepared script and turns to his preferred style of extemporaneous bluster and invective…

In interviews, Republican lawmakers, administration officials and members of his re-election campaign said they wanted Mr. Trump to limit his error-filled appearances at the West Wing briefings and move more aggressively to prepare for the looming recession…

One of Mr. Trump’s top political advisers, speaking on the condition of anonymity so as not to anger the president, was even blunter, arguing that the White House was handing Mr. Biden ammunition each night by sending the president out to the cameras…

And it’s not just an overwhelming majority of voters who believe the medical experts should be center stage: Senator Mitch McConnell, the majority leader, personally urged Mr. Trump at the start of the crisis to let Drs. Fauci and Birx be the face of the response, according to a Republican official familiar with their conversation.

The evidence that the briefings are hurting him more than helping is circumstantial, but it’s out there. There’s a little more of it today:

Even as Trump boasts of big ratings for his daily briefings, approval of his handling of coronavirus has flipped negative since March. pic.twitter.com/h0MiX04DJQ

Counterpoint: “Mr. Trump has told aides he relishes the free television time and boffo ratings that come with his appearances, administration officials say,” per the NYT. Not just aides!

Because the T.V. Ratings for the White House News Conference’s are the highest, the Opposition Party (Lamestream Media), the Radical Left, Do Nothing Democrats &, of course, the few remaining RINO’S, are doing everything in their power to disparage & end them. The People’s Voice!

The Times goes on: “Advisers are torn between knowing that a less abrasive approach would help Mr. Trump and their awareness that he can’t tolerate criticism, regardless of the setting.” That sounds vaguely like the way a trainer would puzzle out how to train a dangerous animal. You need to approach him in a very particular way… But I think it misses the point. Even if he could be convinced that a different approach at the briefings would raise his odds of reelection, he’s not going to trade that for an opportunity to appear on TV with a big, rapt audience. It’s not a matter of how he handles criticism, it’s a matter of priorities. Why does he even have this job if he can’t avail himself of extended daily camera time with the country hanging on his every word?

The reason the briefings are a ratings hit, said the WSJ in a new editorial today, is because they involve a subject that’s life and death for 330 million Americans, “not because people enjoy Donald Trump sparring with the White House press corps like a Packers-Bears game.” You’ll never, ever convince him of that, so why bother trying? Some aides, in fact, don’t bother. The Times claims they’ve nudged him about not jabbing at governors so much during the briefings, especially governors in swing states like Gretchen Whitmer who are getting good marks from voters locally, but “they acknowledge their efforts can be something of a fool’s errand; the president has his style and he won’t change, they say.” A politician who cared more about reelection than in airing personal grievances would steer clear of squabbling with a popular leader in Michigan. Oh well.

Here’s the funniest line: “Some even suggested he summon a broader range of the country’s leaders, including former Presidents George W. Bush and Barack Obama, in an all-hands-on-deck moment to respond to the national emergency.” Try to imagine him offering to share his spotlight, even only a little bit, with Barack Obama. Asking him to cut Bush in is a big ask in itself, since he got elected by disparaging the Bush administration and wouldn’t savor the optics of the new Trumpified GOP turning for help in a major crisis to the old Bushified GOP. But at least there’s no partisan barrier there. It’s unimaginable that the guy who once famously said of America’s problems, “Only I can fix it,” would turn to the Democrat he succeeded. If his aides think he’s intolerant of criticism, run the ol’ “we need Obama” plan by him and see how he reacts.

The irony is, if Trump were capable of a gesture like that, it’d be a clever move politically. It’d be a bad look for Obama to decline a presidential invitation to help the country in an hour of need. He might feel he had to accept even if he didn’t want to. And if he did, it would put him in an awkward position for the upcoming campaign: Democrats want him to be a super-surrogate for Biden but having Obama participating in some sort of coronavirus relief effort with Bush at Trump’s behest would limit his ability to do that. It would move him “above” partisan politics by making him part of a bipartisan relief effort. How could he attack the White House for its failures to head off the crisis while working with the White House to limit the damage from the crisis?

Trump’s not going to invite Obama, though. He’s the only important one on that stage.

Here’s Nikki Haley this morning on Fox *very tactfully* suggesting that Trump would benefit if he let Fauci and Birx take more of a lead at the briefings. But what about the fact that Trump’s interests and Fauci’s and Birx’s interests aren’t perfectly aligned? They all want the crisis over ASAP but Trump’s clearly moving towards calling for the country to reopen before scientists are satisfied that proper precautions have been taken. Why would Trump want to raise their profile at a moment when he has good reason to think they’re going to undercut his policy preference? In a normal administration there’d be no daylight between the president and the top health officials at a moment like this. We don’t have that luxury, unfortunately.