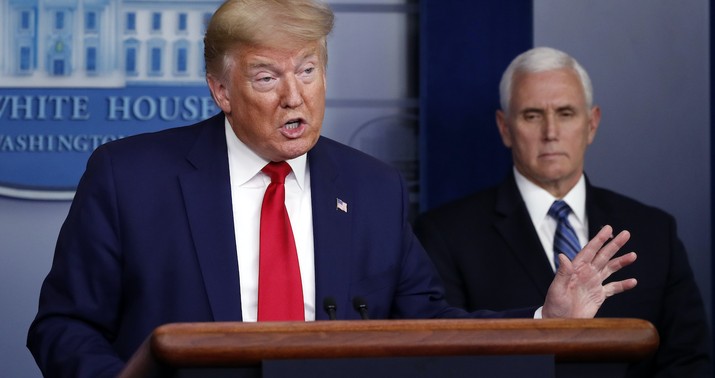 It hadn’t occurred to me that the briefings might explain why the small bounce in his job approval after the virus crisis hit had begun to fade. I thought it might be because there’d been more reporting lately about how the feds bungled their initial response to the outbreak. Or it might be a simple reaction to the rising death toll and gruesome unemployment numbers. The briefings seemed like the least likely explanation because Trump sounds at them like he always does.

But maybe that’s just it. He sounds like he always does.

Politico speculated last night that there’s a connection between the small decline in his numbers lately and the briefings. But it’s this WSJ editorial that made me take the idea more seriously. The Journal is owned by Rupert Murdoch and is reliably pro-Trump. But not on this:

[S]ometime in the last three weeks Mr. Trump seems to have concluded that the briefings could be a showcase for him. Perhaps they substitute in his mind for the campaign rallies he can no longer hold because of the risks. Perhaps he resented the media adulation that New York Gov. Andrew Cuomo has been receiving for his daily show. Whatever the reason, the briefings are now all about the President.

They last for 90 minutes or more, and Mr. Trump dominates the stage. His first-rate health experts have become supporting actors, and sometimes barely that, ushered on stage to answer a technical question or two. Vice President Mike Pence, who leads the task force, doesn’t get on stage until the last 15 minutes or so. That becomes the most informative part of the session, since Mr. Pence understandably knows details the President doesn’t…

One of the ironies of this Presidency is that Mr. Trump claims to despise the press yet so eagerly plays its game. Every reporter knows the way to get a TV moment, and get a pat on the back from newsroom pals, is to bait Mr. Trump with a question about his previous statements or about criticism that someone has leveled against him. Mr. Trump always takes the bait…

The President’s outbursts against his political critics are also notably off key at this moment. This isn’t impeachment, and Covid-19 isn’t shifty Schiff. It’s a once-a-century threat to American life and livelihood.

The briefings may have boosted Trump’s approval rating early on, the Journal speculates, by showcasing the competence of his health officials. Pence’s low-key tone and polished just-the-facts presentation were reassuring too. The takeaway was that responsible people were in charge, whatever you may think of their boss. But now it’s just the daily Trump show, probably because it bothers him to see a huge national audience tuning in every day to a White House presentation led by his deputies, not him. Given a choice between higher job approval/higher odds of reelection and getting to perform before a big crowd, he’ll take the crowd every time.

Besides, his numbers haven’t cratered. The loyalty of his base is such that there’s probably nothing he could do or say to drive his approval below 40 percent. But he’s clearly lost his “crisis bounce” lately: His RCP numbers have dropped from an all-time high of 47.4 percent approval to 45.2 percent, which is in line with where he’s been for most of this year. Six separate polls released yesterday placed him between 40 and 45 percent, par for the course for him for much of the past three years. The public is probably returning to its view of Trump during normal times because his persona at the daily briefings is scarcely different from how it is during normal times.

But it’s hard to disentangle a “briefing effect” on his support from growing public awareness that the feds did a bad job early in containing the virus. For instance, this data from YouGov could cut either way:

Part of the reason for that decline may be that Americans increasingly blame Trump for the vast scale of the U.S. coronavirus outbreak. Asked how much the president could have reduced the damage if he’d acted sooner, 65 percent said “a lot” (40 percent) or “somewhat” (25 percent). Only 36 percent said “slightly” (14 percent) or not at all (22 percent). Likewise, the percentage of Americans who say the Trump administration was not adequately prepared to deal with the deadly pathogen has risen from 51 percent a month ago to 63 percent today, while the percentage who say the administration was adequately prepared has fallen from 30 percent to 22 percent.

Public opinion on intangibles like “unifying the country” and “communicating with the public” is probably mostly a reaction to the briefings. Blaming him for the scale of the outbreak is probably a reaction to the news. (The numbers among Republicans are up lately in that category too.) It seems likely that the more people blame him, the more primed they’ll be to react badly to the briefings. On the other hand, the more annoyed they are by the briefings, the more willing they may be to blame him for the outbreak. There’s an unsolvable chicken/egg problem here.

But whichever is the cause and which the effect, he’d help himself by keeping his appearances at the briefings short and letting Pence et al. reassure the public that progress is being made. One of the most important things he can do to aid his reelection before November is give the public ample reason to forget the many times he said in February and early March that the virus was under control and would be gone soon. No doubt that’s contributing to the public’s tendency to blame him for the outbreak: It’s all too easy to recall Trump’s sanguine pronouncements about the threat from the disease and conclude that he was asleep on the job. The more visible Fauci and Birx are, the easier it is for voters to tell themselves that the president’s fully focused now, however belatedly. The less visible they are, and the more he bickers with the press for an hour every day, the more it seems that he’s still distracted and not prioritizing correctly.

Speaking of which, CNN is claiming today that Pence’s office has blocked Fauci and Birx from appearing on their network recently because the network refuses to carry Trump’s entire remarks live every day. They go live to him when the Q&A part of the briefing begins even though that’s when he’s most likely to go “full Trump” with the media because that’s typically also the only time that Fauci and Birx get to comment. Someone high up resents CNN for not airing Trump in full and is willing to punish them by denying them access to Fauci and Birx even though the whole point of this White House messaging effort is, ostensibly, to have health officials communicating with the public. And I’m guessing that someone isn’t Mike Pence.