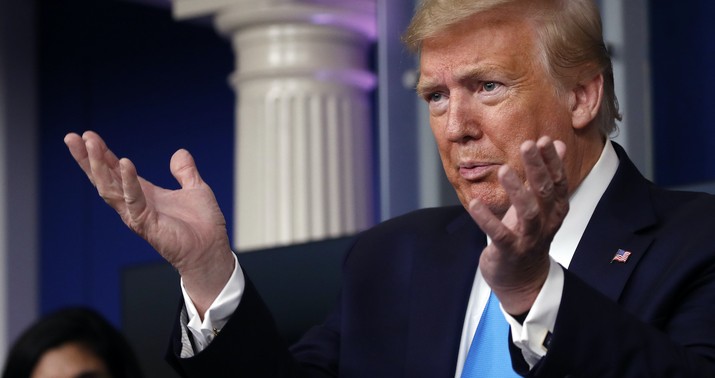 Gonna quote myself from this earlier post, which was published an hour or two before he sent the tweet below: “Given a choice between higher job approval/higher odds of reelection and getting to perform before a big crowd, he’ll take the crowd every time.”

I blame this on the Times, which stupidly posted a story two weeks ago about the daily briefings being a “ratings hit.” The audiences for some reportedly rival the typical audience for “Monday Night Football.” I haven’t seen data that confirms this but I bet you can trace the ever-growing duration of Trump’s speaking time at the briefings to around the date that article appeared.

The Wall Street Journal always “forgets” to mention that the ratings for the White House Press Briefings are “through the roof” (Monday Night Football, Bachelor Finale, according to @nytimes) & is only way for me to escape the Fake News & get my views across. WSJ is Fake News!

He has Twitter to get his views across, as he’s doing here. And the WSJ didn’t forget that the briefings draw a large audience. They know it. It’s what they’re afraid of. The TV audience for updates on a deadly pandemic isn’t the same audience that would show up for a Trump rally just to listen to him riff. The Journal fears that he’s doing damage to himself with persuadable voters by reminding them that he can’t act “presidential” for an hour when the cameras are on even when there are 15,000 people dead and 16 million unemployed.

Brit Hume’s not a MAGA true believer but he’s generally sympathetic to Trump and the GOP. Not this time.

This is a ridiculous tweet. He could get his views across without bragging, endlessly repeating himself, and getting into petty squabbles with the junior varsity players in the WH press corps. And he could stop talking much sooner to give Pence, Fauci, Birx and Giroir more time. https://t.co/ui7sN3WgGx

Why would he hand off a “Monday Night Football”-sized audience to Fauci and Birx? This isn’t the Fauci & Birx show, or even the coronavirus show. It’s the Trump show. He’s the main character.

Now, if he wanted to argue that people like me are being silly for blaming his small slide in job approval lately on the briefings, he’d be on firmer ground. There are more obvious explanations:

The mounting death toll will test the loyalty of his voters in ways that few things have. Impeachment didn’t test it because that was partisan war. Russiagate didn’t test it because that was partisan war. The COVID-19 outbreak and his success or failure in containing it won’t involve partisan war. Joe Biden will needle him from the sidelines, but no one will care. Trump will be measured on competence for once. I think he’s been shrewd about preparing for that so far, sticking with Fauci and Birx on their recommendations despite the fact that noisy parts of the MAGA activist class have demanded that he focus more on reopening the economy. So long as he sides with the doctors, it’s not so much his competence that’s being measured, it’s theirs. (Remember, right now Americans support the lockdowns by a margin of 10 to one.) He’s also been shrewd and/or lucky in that the White House model projecting 100,000 to 240,000 deaths looks for the moment like an overestimate. If we fall far short of that number, he can take a victory lap.

But in “these uncertain terms” (as TV commercials have tended to describe the crisis), public opinion is uncertain. If we land at 80,000 deaths, say, does Trump get credit for a better than expected outcome? Or does he get blame for what is, after all, a gory number?

He’ll be attacked by Democrats relentlessly either way, of course, and not always fairly. Check out this GIF, which (a) takes China’s and Iran’s bogus data at face value and (b) uses raw numbers of confirmed cases instead of controlling for population. Italy and Spain are each well ahead of the U.S. in terms of total cases and deaths per one million people. As are various other European countries.