Er, don't panic but the generic ballot is now tied

I’m sticking to my story that this is mostly a product of Americans being tuned out of politics during the summer doldrums and that the GOP’s lead will reassert itself this fall. Inflation is an irresistible force, aided by the gravitational pull of the out-party always, always doing well in midterm elections in modern times. The last time we had a midterm that didn’t produce a wave of some sizable magnitude for the minority party was 20 years ago(!). And that one was sui generis due to 9/11.

So there’s no need for bedwetting. 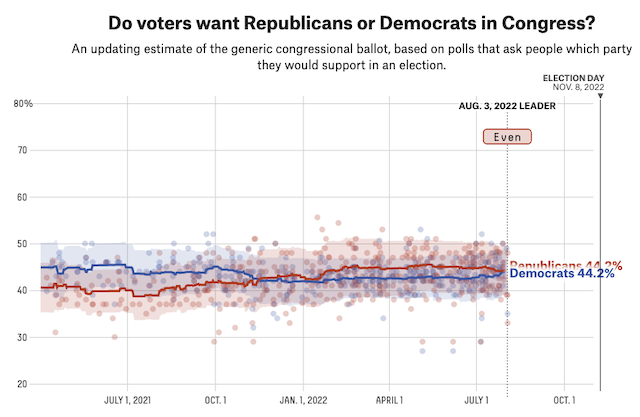 You have to go all the way back to mid-November 2021 to find Democrats as competitive on the generic ballot as they are now in FiveThirtyEight’s tracker. Over at RCP, meanwhile, the GOP’s lead is down to 0.3 points. I speculated last night about what’s driving it. Is it a “Roe effect”? Probably in part, sure — but FiveThirtyEight had the GOP up by more than two points as recently as July 12, several weeks after Dobbs was handed down. Maybe it took a little time for the shockwave of the decision to ripple through the electorate, propelled by red states moving quickly to ban abortion entirely?

There’s little doubt that abortion is helping Democrats in polling. There is some doubt as to whether it’ll help Democrats with actual voting.

But another factor contributing to the shift is more prosaic than that. Behold.

U.S. oil dropped to $90.66 a barrel yesterday, the lowest it’s been since February. The median price at the pump is now $3.99 nationally thanks to weakening demand amid fears that we’re in a recession. It’s strange to think that the recession news cycle might have benefited Biden in any way, but insofar as an economic downturn is spooking people into driving less and thereby driving down the price of gas, which bears on presidential job approval, it might have. For now.

None of this is enough to upend the forecast in the House. FiveThirtyEight gave Republicans an 88 percent chance of winning a majority this fall on July 13 and those odds are still strong at 80 percent today. The Senate, on the other hand, is beginning to look dodgy: 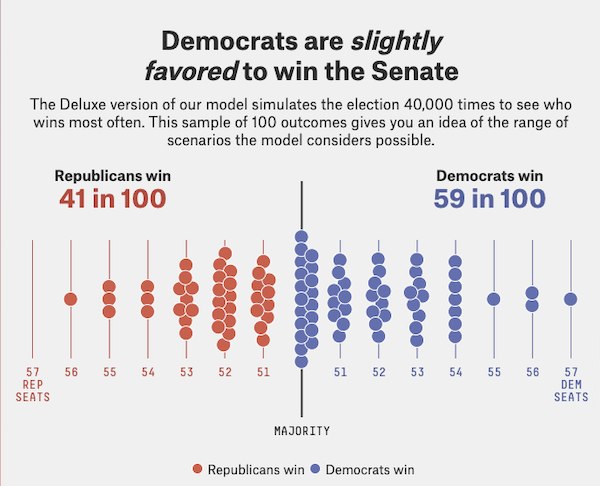 Republicans were slightly favored by FiveThirtyEight’s model to hold a majority of seats next year as recently as July 25. Why the change?

It’s more than just abortion and gas prices. Candidate quality is hurting Republicans too. Mehmet Oz has posted a series of garbage polls against John Fetterman in Pennsylvania, boosting the Democrat’s chances of winning that seat from 54 percent ten days ago to 67 percent now. The GOP can still win a majority if it loses PA but Arizona is also looking shakier following Blake Masters’s victory in the GOP primary. Mark Kelly had a 60 percent chance of victory on July 25 and enjoys a 68 percent chance today.

When you put out an internal poll that shows you down 5 and the other guy at almost 50%, that would tend to suggest you're in a lot of trouble (regardless of messaging, which is something both sides get a chance to do). https://t.co/eYsEMxSYCS

Losing Pennsylvania and Arizona would make things hard on the GOP. No one wants to bet the Senate majority on the willingness of Georgia voters to overlook Herschel Walker’s deficiencies.

Since we’re in bedwetting mode, let me throw one more bit of data at you. Ohio in the Trump era is so ruby red that J.D. Vance could probably take the rest of the campaign off and still win, but recent polls have caught my eye. 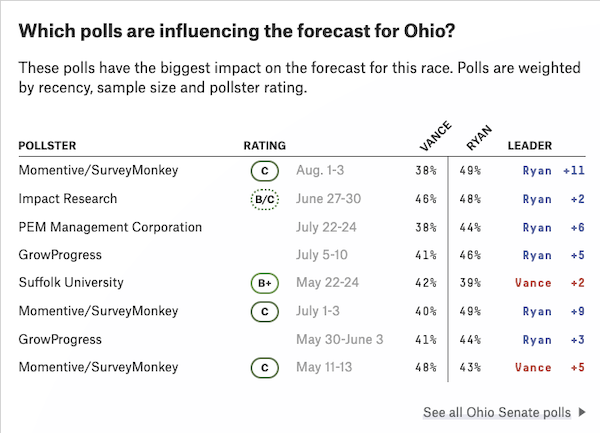 Vance is a strong favorite to win a red state during a red wave, with FiveThirtyEight giving him a 76 percent probability of victory. But back on July 4, it was 89 percent. Democrat Tim Ryan has gone from a one in 10 chance of winning to a one in four chance in a month. And by all accounts, Ryan is running an excellent campaign shrewdly geared at picking up crossover votes from Republican voters who don’t know much yet about the newbie Vance. His chances could go “poof” at any moment due to bad economic data or some sort of Democratic scandal, but the trajectory he’s on suggests he’ll have a fighting chance in November. Especially if abortion becomes a key issue: As we learned a few days ago in Kansas, “red states” aren’t as red as they look when that topic is front and center.

Joe Biden Proves Once Again Why He Isn't Fit to be President
Townhall
CBS reports breaking news about the Dems' 'Inflation Reduction Act' (Shocker: 'They waited to report this until after it passed')
Twitchy
Report: Surprising Private Message Trump Sent to Merrick Garland After Mar-a-Lago Raid Revealed
Redstate
Yes, They're Going to Arrest Donald Trump. Deal With It.
PJ Media