David Drucker identified the typical pundit cycle of life in a season like this last week on Twitter. We’re in the so-called “bedwetting” phase of midterm prognostications at the moment.

A red wave is inevitable, but how big will it be? Are we talking tsunami or just the current gently lapping against the sea wall in blue states?

Over at RCP today, the GOP’s lead in the generic ballot has reached its lowest point since January: 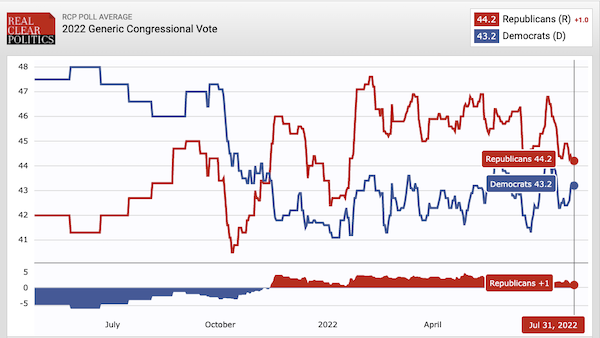 At 44.2 percent, Republicans’ share of the vote is also the lowest it’s been in more than six months. Wet that bed!

CBS News published its first battleground tracker of the campaign over the weekend, a model they’ve assembled by polling tens of thousands of voters and then connecting “their current preferences to the 2020 Census, district data and millions of voter records to estimate seat counts.” If you’re hoping for a Republican pick-up of 60+ seats a la 2010, CBS says you should aim lower.

Sixteen seats, says their model. That would be more than enough to flip the House, giving Republicans a majority of 230-205, but it would pale next to some of their recent House majorities. From the start of 2015 through the beginning of 219, they controlled more than 240 seats. In the first two years of Bush’s second term, they held 233. Even in an age of extreme gerrymandering and geographical self-sorting, a 230-seat majority would feel like dismal underperformance given the fundamentals of this election. Inflation is at a 40-year high and the country is basically unanimous in believing that the president, who’s polling under 40 percent, should retire. What’s it gonna take to turn a small red wave into a red tsunami?

Maybe nothing if Drucker is right. Maybe we’re just at that point of the campaign where Americans are at the beach, tuned out of politics, and will break hard to the right once they start paying attention again in September. There are plenty of indicators in CBS’s data that bode ill for Dems:

[Y]et, in the 2018 midterms Democrats won women by 19 points; today that’s cut in half. They won White women with college degrees by a whopping 20 points; today, their lead among the latter is just six. There are a double-digit number of undecideds in this group, setting them up to be a key group to watch over the next months…

There’s a gender gap on enthusiasm: women are less likely than men to say they’re very enthusiastic about voting, by double digits…

While 2018 set a record for youth turnout in midterm elections, 2022 so far looks to be a return to normal, lower patterns. Just a third of registered voters under 30 feel very enthusiastic about voting this year, lower than their older counterparts. And they constitute the least likely age group to say they’ll definitely vote this year. Add to that a modest Republican turnout advantage even among older voters and it becomes clear why Democrats are trailing…

One key group to watch is White women with a college degree. They went big for Democrats in 2018, but 12% of them are undecided in their vote choice right now.

Democrats were hoping for more of a Roe-inspired backlash among women, especially educated women. Meanwhile, they lead among Hispanics by just three points, 45/42. In the 2018 midterm exit polls, they won that group by, uh, 40 points. It’s *really* hard to believe that a shift that profound combined with diminished enthusiasm among core Democratic constituencies like women and young adults won’t add up to more than 16 net seats for the GOP.

After all, says Amy Walter, a president’s job approval always has a gravitational effect downballot. Candidates can and routinely do run several points ahead of an unpopular president from their own party in midterm races, but historically there’s been a limit as to how far ahead at around five to six points. Which means if Biden is polling at 40 percent approval in battleground races, figures like Raphael Warnock and John Fetterman and Tim Ryan might be expected to stall out at around 46 percent. And it’s awfully hard to win an election at 46 percent if you don’t have the electoral college to help you out.

Bottom line: The encouraging midterm news for Dems lately is probably a combination of GOP bedwetting and the summer doldrums distorting the likelihood of a big red wave en route. Biden’s going to end up dragging down candidates who would win if the national environment were just a tiny bit better for his party. But if you want to read the case for how and why Republicans really might blow it, Harry Enten’s your man. Maybe the gravitational effect in this midterm will be a bit weaker than it usually is, he speculates, allowing candidates like Warnock to reach orbit:

It’s because Republicans are also unpopular. There are a lot of voters who don’t like either Biden or the GOP…

Biden’s favorable rating among those under 50 is shockingly low (32%) given that younger voters are usually part of the Democratic base.

Yet, these same voters are going 48% to 39% for Democrats on the generic ballot.

It’s not just a Trump thing. Dr. Oz has performed so abysmally in Pennsylvania thus far against Fetterman that Republican operatives have begun gaming out ways that they can flip the Senate despite losing in PA. Oz is a much less popular figure there than Trump is. Meanwhile, Herschel Walker has trailed in the last six polls of Georgia against Warnock, and although Ryan is a longshot in Ohio against J.D. Vance, he’s holding his own in early internal polling. There’s an excellent chance that all three Republicans I just named end up running behind Trump in their home states. The House will flip, whether easily or less comfortably, but the Senate really is in play. At least during summer bedwetting season.

Cheney’s Humiliating Defeat Is Another Sign That We Are Winning
Townhall
Here's a savage thread by Tom Elliott on why citizens should be pro-defunding the FBI
Twitchy
Trump Takes His Troll Game to Another Level, Starts Endorsing Democrats
Redstate
BOMBSHELL: Outing of Trump Raid 'Leaker' Shatters FBI Document Excuse, Now All Eyes Are on Affidavit Hearing
PJ Media