I’m less clear on why Susan Collins would. Unless she really is royally pissed at Brett Kavanaugh for allegedly having misled her about Roe in their private conversations and now feels obliged to try to make amends to the left somehow.

It’s not gonna work, if that’s the play. I have yet to see or hear a Democrat anywhere since Roe was overruled refer to Collins as anything other than a dupe or a liar for supporting Kavanaugh’s confirmation. Even Kamala Harris has shrugged off questions about whether Gorsuch or Kavanaugh should be impeached by saying that she simply didn’t believe them when they spoke encouragingly about stare decisis. The lefty line is that only a sucker or a secret pro-lifer could have thought they were on the level.

So here’s Collins trying to prove she’s not a secret pro-lifer, just a sucker, I guess.

“Every American should have autonomy over their own health care decisions, and the Supreme Court’s decision in Dobbs has made it imperative for Congress to restore women’s reproductive rights. I’m proud to introduce bipartisan legislation with my colleagues to write into law the protections provided through Roe and Casey as well as affirming access to contraception provided in Griswold and other cases,” said Senator Murkowski. “For five decades, reproductive health care decisions were centered with the individual – we cannot go back in time in limiting personal freedoms for women.”…

“The Supreme Court’s recent abandonment of longstanding precedent erodes the reproductive rights on which women have relied for half a century. These basic rights need to be the same for American women regardless of the state in which they reside. Our bill would restore the right to obtain an abortion by enacting in federal law Roe v. Wade and other seminal Supreme Court decisions pertaining to reproductive freedom. In addition, our bill would protect access to contraception,” said Senator Collins. “By reinstating—neither expanding nor restricting—the longstanding legal framework for reproductive rights in this country, our bill would preserve abortion access along with basic conscience protections that are relied upon by health care providers who have religious objections.”

The so-called Reproductive Freedom For All Act differs in some ways from the Women’s Health Protection Act, which passed the House a few weeks ago. Notably, it upholds conscience protections for medical personnel who don’t want to participate in abortions; the WHPA would weaken those protections, which is why Collins wouldn’t support it. The guts of the bill, which will take you less than two minutes to read, would reinstate the federal status quo that was stripped away by the Dobbs ruling by barring states from placing any “undue burden” (defined vaguely as “a substantial obstacle in the path of a woman”) on the right to have an abortion before a fetus is viable. “Undue burden” comes from the Supreme Court’s now-overruled Casey decision and the viability standard comes from Roe. Just a return to the law as it stood six weeks ago, then, right?

Well, hold on. The WHPA allows abortion on demand pre-viability and then abortion after viability when “in the good-faith medical judgment of the treating health care provider, continuation of the pregnancy would pose a risk to the pregnant patient’s life or health.” Pro-lifers warn that that’s a loophole big enough to drive a tank through, particularly because the WHPA also instructs judges to interpret its provisions “liberally.” If a woman goes to Planned Parenthood in her third trimester and says she’s bummed out that she’s having a baby, is that enough of a “health” concern (depression!) to justify an immediate termination? If it is, then the WHPA does much more than just codify Roe. It creates a de facto rule of abortion on demand throughout all nine months.

So what does the new bill backed by Collins and Murkowski say? Quote: 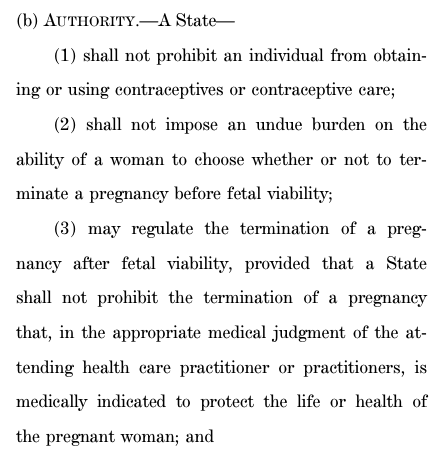 This one also creates a vague “health” exception that could be abused, although (a) the language about a health problem that’s “medically indicated” presumably would require more than the patient feeling blue to justify a late-term abortion and (b) there’s nothing in the text here that encourages judges to interpret it “liberally.” But if a woman came to her doctor in her third trimester with an official diagnosis of depression from her psychiatrist, would that be enough of a “medical indication” to justify an abortion at that stage? It’s not clear to me from the legislation.

That’s an edge case, admittedly, as nearly all abortions are performed before viability. But it’d be nice if they addressed whether mental health counts as “health.”

Anyway. Democrats want to introduce this bill because they know most of the public opposes overturning Roe and they’re eager to get Senate Republicans on the other side of the issue before the midterms. Murkowski wants to introduce the bill because the kooky ranked-choice voting system in her upcoming Senate race means that Democratic voters in Alaska are hugely important to her reelection bid, and this is an obvious way to pander to them. Collins isn’t up for reelection until 2026, however, and she knows that a floor vote on this bill will be a campaign ad for Democrats, for all intents and purposes. So why is she co-sponsoring it?

Is it really just her way of rebuking Kavanaugh, or is she starting to worry already about how her vote to confirm the man who overturned Roe will play in Maine when she’s up again in 2026? You can never start too early in preparing for your next campaign, I guess. Especially in a state that tends to prefer the other party.

Exit question: Knowing that Joe Manchin is probably on board, how many votes will this legislation get in the Senate? I’d guesstimate a range of somewhere between 52 and 52.

You’ve Got to Be Kidding: These Are the Items That Led to the FBI Raid on Trump’s Mar-a-Lago
Townhall
MSNBC guest calls out those 'attacking non-politicized and independent law enforcement' after FBI raid
Twitchy
Merrick Garland's Presser Suggests the Resistance Libs Got Played
Redstate
UKRAINE WAR: Russia's Saki Air Base Blew Up and No One Knows How
PJ Media