Sen. Mary Landrieu is flailing.  She doesn’t own a home in Louisiana, but insists that her 7,300 square foot, $2.5 million house on Capitol Hill isn’t a “mansion.”  She’s attacked her main Republican opponent for being soft on immigration, hoping that voters will pay no heed to her own voting record and rhetoric.  She says she supports the Keystone pipeline and “fixes” to Obamacare (for which she cast the deciding vote and pledged to be “100 percent” accountable), but hasn’t been influential enough to persuade her own party’s leadership to allow votes on either issue.  And Sean Trende’s deep data dive portends ominous things for the three-term incumbent.  So do the polls. According to a fresh USA Today/Suffolk survey, Landrieu is attracting just 36 percent of the “jungle primary” vote, with her top two GOP opponents combining for 46 percent of the vote.  In the very likely event of an early December run-off, Landrieu is frozen in the low 40’s and trailing Bill Cassidy by seven points:

The Suffolk University poll, conducted for WWL-TV, USA Today and Gannett Louisiana newspapers, shows the two frontrunners in essentially a statistical dead heat, with 36 percent of those surveyed saying they would vote for incumbent Sen. Mary Landrieu in the Nov. 4 primary. 35 percent chose Rep. Bill Cassidy and 11 percent chose Tea Party-backed candidate Col. Rob Maness. 18 percent were undecided or chose other candidates...If, as expected, the race goes to a Dec. 6 runoff between the two frontrunners, those polled favored Cassidy 48 percent to 41 percent, with still 11 percent undecided. Paleologos says Maness will be an ally to Landrieu in November, keeping votes away from Cassidy, but that won’t be the case in the runoff. “In December, Rob Maness isn’t going to be an ally because his voters – 89 percent of them – say they are unfavorable to the senator, so that’s a problem for her,” Paleologos said. 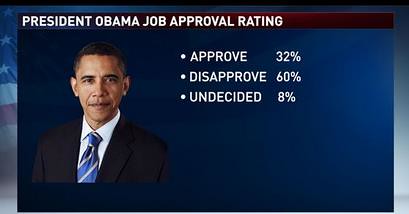 The president’s approval rating is underwater by 28 points in Louisiana, translating into an ugly (38/54) number for the state’s Democratic Senator.  As Obama himself said, his allies in Congress are strong supporters of his agenda — and few have been more steadfast than Mary Landrieu:

ICYMI the 2014 Rubber Stamp Club… makes you wonder if they assumed 2014 scores wouldn’t be out before the election. pic.twitter.com/Ijf1WsP3dy

At a recent debate, Landrieu rated Obama’s job performance as a 7/10 — which is a far more generous score than most Louisianans would give, yet doesn’t even begin to reflect Landrieu’s stratospheric pro-Obama voting record.  Elsewhere in contested Senate races, polls are spouting up everywhere.  In addition to Sunday’s polling avalanche, a new High Point University survey shows North Carolina’s race all knotted up, with incumbent Sen. Kay Hagan still treading water in the mid-40’s (no wonder she and her supporters are stooping to these racial lows), while Rasmussen shows Cory Gardner breaking 50 and leading by six points in Colorado.  I take all Rasmussen polls with grains of salt, but the (+6) margin is right in line with other recent numbers from Quinnipiac and Suffolk/USA Today.  Meanwhile, up in Alaska, Republican Sen. Lisa Murkowski is (again) spitting bullets at embattled Democrat Mark Begich.  The Begich campaign has now used her likeness in two separate television ads without her permission, in a shameless effort to imply that she supports his re-election.  When GOP challenger Dan Sullivan called Begich out on this point at a debate, the incumbent claimed that Murkowski was only upset because she didn’t like how she looked in the photo.  Murkowski unloads:

“That is belittling,” Murkowski said. “I think I made very clear that I had objections, serious objections, to how that ad portrayed our relationship. It was an implied endorsement, and I didn’t appreciate that. I think Begich knows where I stand in this race. Again, no means no.”

Alaska’s senior senator is sufficiently popular to have won a statewide write-in campaign in 2010 after losing the GOP primary.  Despite that episode of intra-party tension, she’s been a strong team player in the Sullivan/Begich race:

I’ll leave you with this softer, longer-form biographical piece on Dan Sullivan from the NRSC. Based on his background, resume and choices, Sullivan seems like a high caliber individual:

Newsweek analyst: Let's face it -- Biden has outsourced next-9/11 prevention to Beijing

Is it time to go to single dose vaccine vials?