Behold, yet another data point indicating that Obama’s 2012 re-election coalition is splintering or flat-out apathetic heading into the midterm cycle, via the Washington Post: 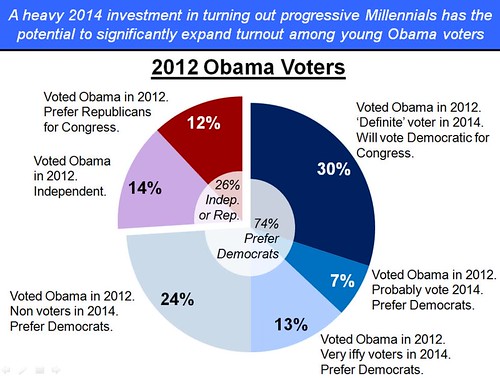 As this graph illustrates, less than a third of Obama’s 2012 Millennial voters say they’ll “definitely” vote for Democrats this fall.  Almost as many have abandoned the party label completely, either by shifting to independent status or by supporting Republicans.  When this Democratic pollster tabulates the data, he finds that only half of all the young Obama voters surveyed will definitely, probably, or maybe vote for Democrats in the midterms.  The rest plan to sit at home, or to back other candidates.  In 2010, Millennial turnout dropped significantly compared to 2008, and the gap between the two parties among those who did vote narrowed considerably.  The strategist’s advice to Democrats, therefore, is to “heavily invest” in turning out “progressive Millennials,” pronto.  If the party heeds his counsel, expect to hear a lot about gay marriage and birth control over the next six months. Also via WaPo, here’s a chart that employs the (fairly Democrat-friendly) NBC/WSJ polling series to track this year’s fundamentals, comparing the current numbers to surveys conducted before previous midterm waves. Chris Cillizza says the results “should scare Democrats:” Those indicators — which are also reflected in other public polling — would certainly seem suggest that Democrats are cruisin’ for a bruisin’ this fall.  But lest conservatives start counting chickens, allow me to float two friendly reminders: (1) The most vulnerable Senate Democrat incumbent, on paper at least, is leading his (highly impressive) Republican challenger by double digits according to some polls, though others show a very tight race.  (2) Republican-held Senate seats in Georgia and Kentucky aren’t necessarily gimmes either.  I’ll add one more: Even if young Obama voters do blow off the midterm elections this year, they sure seem pretty susceptible to hype over famous presidential candidates with cool friends and vague, history-making campaign themes.  What could go wrong?*

*AP, feel free to just FedEx me the Eeyore crown whenever you have a spare moment.