Pew: Republican trust in media falls by half in past 5 years [Corrected]

Pew’s latest survey on trust in media has bad news for the industry across the board, but clearly much worse among Republicans. In their regular longitudinal polling on the subject, trust has fallen by five points among Democrats since 2016, and eighteen points among independents [see update/correction below].

However, that pales in comparison to the thirty-five point drop among Republicans, which leads to another question:

In just five years, the percentage of Republicans with at least some trust in national news organizations has been cut in half – dropping from 70% in 2016 to 35% this year. This decline is fueling the continued widening of the partisan gap in trust of the media.

Nearly eight-in-ten Democrats and Democratic-leaning independents (78%) say they have “a lot” or “some” trust in the information that comes from national news organizations – 43 percentage points higher than Republicans and Republican leaners (35%) – according to a new Pew Research Center survey conducted June 14-27, 2021. This partisan gap is the largest of any time that this question has been asked since 2016. And it grows even wider – to 53 points – between liberal Democrats (83%) and conservative Republicans (30%).

And the question is … did 70% of Republicans really have at least “some trust” in national media in 2016? I kid, I kid … sorta. Anyway, the loss is hardly limited to Republicans, clearly. Take a look at the chart on the left: 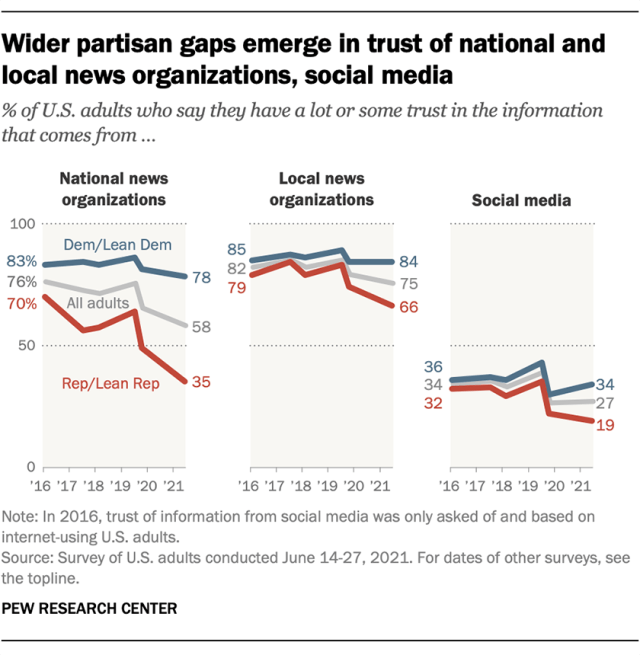 Clearly something broader than “Republicans don’t like the news” is happening here. What’s causing the erosion of trust in national news media outlets? That’s a worthy question for more serious study, but a few highlights over the last five years might explain some of it:

That’s hardly a comprehensive list. The Cuomo angles could go on for paragraphs, for instance. Even without getting too much into the obviously biased coverage of Donald Trump (which Trump seemed to enjoy as a foil, if not outright encourage), there’s been plenty over the last five years to sour anyone on trusting national media outlets that have turned reporting into crypto-editorializing.

Instead, this reads more like a scolding of those who are insufficiently devoted to the media faith. No other industry blames its customers for declining reputations, at least not without eventually blinkering out of existence. When half of Republicans stop trusting national media outlets over the course of a short five years, perhaps the people who run those outlets should take a hard look to figure out what they’re doing wrong. That is, if they care about their customers’ trust more than they care about promoting their narratives.

Update: I can’t believe I made this error, but Pew reached out to me to point out that the center line in that graph isn’t charting independents but the overall rating from adults in their survey. I’ve tried to remove the references to independents except the first one to flag the correction. My apologies for the error, and thanks to Pew for their very polite and friendly explanation of where I screwed up.

It would be interesting to see the data on independents, but Pew doesn’t have that data in this survey. I’d assume, however, that trust has fallen off a lot less than I initially assumed among indies, given that the overall result is almost exactly in between the line for Republicans and Democrats.

Ana Navarro to Jen Psaki: How can the next election be legitimate if election reforms haven't passed?
John Sexton Jan 21, 2022 5:20 PM ET