Seems like Oakland has finally had enough of the Occupy Movement.  Hours after warning protesters to leave public property, police intercepted them as the demonstrators tried to return.  The mob attacked, and police went into full riot mode:

The police in Oakland dispersed hundreds of protesters using tear gas and flash bombs on Tuesday night as crowds tried to re-enter a plaza outside of City Hall that the authorities had cleared of an encampment earlier in the day. …

By Wednesday morning in downtown Oakland, a dim cloud of gas still hung in the air over Frank Ogawa Plaza, according to images broadcast on CNN. A small number of police in riot gear stood by barricades around the plaza and a handful of protesters held signs nearby.

“It sounded like bombs,” said Joaquin Jutt, 24, a digital animator who was among the protesters on Tuesday night. “There was a stinging and burning in my throat, eyes and nostrils. My eyes burned like there was hot sauce in them.”

Zombie continues his close coverage of Occupy on the West Coast with photos and video at PJ Tatler, and adds this:

After the Occupy Oakland encampment was torn down early Tuesday morning by police, the ousted protesters reconvened outside the Oakland Library on Tuesday afternoon and voted to attempt a re-occupation of the same plaza from which they had just been evicted. Summoned by waves of emergency tweets and emails, fresh recruits joined the evicted Occupiers and early this evening once again marched on downtown Oakland, intending to reclaim Frank Ogawa Plaza.

But the Oakland Police were of course monitoring all this, and along with many other local police departments they were waiting for the protesters’ invasion. After an hours-long standoff at 14th and Broadway, interrupted by several confrontations and arrests, everything started to turn violent some time after 9:30pm.

What happens when you defy the police and try to “reclaim” a public plaza that the city allowed for a single use for weeks? This:

Be sure to check out the video message from an Occupier who promises to come to Oakland to arrest “every single officer involved,” if you want to start your day out with a laugh.

For the record, the Oakland PD denies that they were using flash-bang grenades:

Dozens of police in riot gear and hundreds of protesters in support of the Occupy Wall Street movement engaged in a game of cat-and-mouse in downtown Oakland on Tuesday, with authorities using tear gas to respond to demonstrators’ repeated agitations.

The latest such skirmish came around 11 p.m. as some protesters began throwing bottles among a crowd that had reconvened in front of City Hall, where a haze of chemical smoke still hung in the air following a similar clash at the site about an hour earlier.It was the fourth time police used tear gas in three hours.

Authorities have denied reports that they used flash bang canisters to help break up the crowds, saying the loud noises came from large firecrackers thrown at police by protesters. Police also report being attacked with rocks.

Overhead footage at KTVU suggests otherwise, however.  The video pretty clearly shows the explosions occurring in the middle of the crowd — which turned out to be an effective method of dispersing the rioters.  Police have had to use this strategy repeatedly during the night:

The protesters gathered at a library and marched through downtown Oakland and ultimately were met by police officers in riot gear. Several small skirmishes broke out and officers cleared the area by firing tear gas.

The scene has repeated itself several times since. But each time officers move to disburse the crowd, protesters quickly gather again in assemblies that authorities have declared illegal.

Acting Police Chief Howard Jordan told reporters at a late night news conference that authorities had no other choice, saying the protesters were throwing rocks and bottles at officers.”We had to deploy gas to stop the crowd,” he said.

We may see something similar in Atlanta this morning, where protestors have also worn out their welcome. So far, though, there seems to be little disturbance after 53 arrests were made overnight in clearing Woodruff Park, which has been liberated:

Organizers had urged protesters who were not arrested to return to the park at 6 a.m., but there were none in the park at 8:30. About two dozen Atlanta police officers remained on the perimeter of the park, which was surrounded by 4-foot metal barricades.

The protesters who were arrested have bond hearings at Atlanta Municipal Court starting at 8 a.m. Two protesters with signs arrived outside the courtroom shortly before the hearings began.

Mayor Kasim Reed told reporters more than 100 officers were involved in the operation to clear the park, adding the protests, which started more than two weeks ago, had cost the city roughly $300,000.

Officers swarmed the park around 12:45 a.m. The arrests were orderly and peaceful, though some of the protesters had to dragged out. By 1:30 a.m. the park had been cleared and by 2 a.m. onlookers and demonstrators who watched from the perimeter had largely dispersed as police maintained a significant presence downtown.

Expect more from other Occupy locations as city government loses patience with the demonstrations and the damage they do.

Update: A comment from Trafalgar deserves a highlight: “Correction needed Ed. The police did not go into full riot mode. The protestors went into full riot mode and Oakland PD responded accordingly.  Retired Oakland PD and proud of my guys!”  Yeah, that’s a fair point, and thank you for your service, Trafalgar.  Also, a couple of commenters questioned whether police actually have flash-bang grenades, and suggest that what we see may be less-powerful ordinance or maybe firecrackers that didn’t get tossed expertly by rioters.  I’ve seen plenty of firecrackers and a few cherry bombs and those look too large to be either (and seem too well placed to be accidental), but it’s a good idea to keep an open mind. 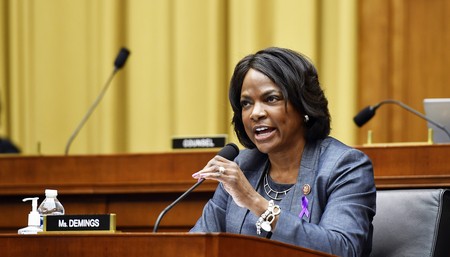