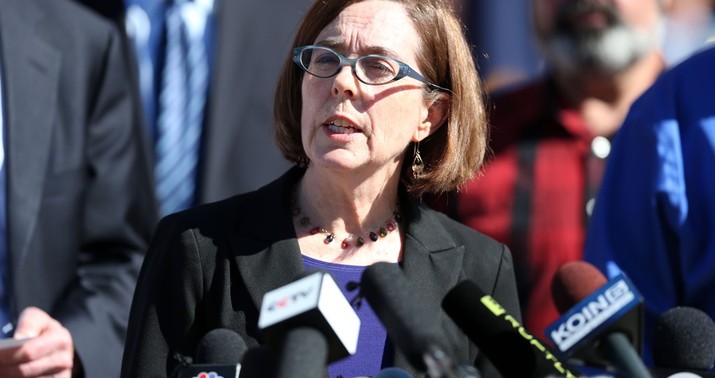 When Oregon was prioritizing who would get the COVID-19 vaccine first, Gov. Kate Brown decided to put teachers at the top of the list, even before elderly people. Willamette Week reports that was a calculated risk: “Brown bet that the bad publicity she’d receive for delaying vaccines for seniors would be countered by the boost to children languishing at home.”

Maybe that risk will still pay off, but it’s starting to look as if teachers and their unions may thank the Governor by refusing to return to classrooms anyway. Sunday the Oregonian published an editorial arguing that, having committed to this risky approach, Gov. Brown needs to deliver.

As understandably angry as seniors are, Brown can make a case for delaying their immunizations to support the imperative of reopening schools. But her justification for this extraordinary decision falls apart if schools across the state don’t actually reopen – a significant concern as some teachers unions question returning to in-person instruction.

Unfortunately, Brown already appears to be disavowing responsibility for ensuring schools reopen. With educators receiving vaccines now, Oregonians should expect and demand that she deliver. A failure on Brown’s part would be an unconscionable betrayal of the hundreds of thousands of seniors who are being forced to wait in service of a greater good.

But as we’ve seen all around the country, getting teachers to return to classrooms is like playing a game of whack-a-mole with unions. There are multiple demands and even when districts meet 3 or 4 unions simply point to 3 or 4 other demands that haven’t been met.

“Our schools will be safe to open when our communities are safe,” Elizabeth Thiel, president of the Portland Association of Teachers, told The Oregonian/OregonLive Editorial Board. She declined to specify what would constitute “safe,” but noted that increasing community vaccination rates and fewer cases would help establish that baseline.

Yesterday Willamette Week published an interview with Thiel who admits that teachers demanded the vaccine before returning to classrooms but now says that’s not good enough:

We did ask for teachers to be vaccinated before a return to in-person learning. Because that makes sense. We did not ask for a timeline for that to happen at the expense of anybody else…

I can’t speak to the governor’s motivations. I had not ever discussed with her personally why she did that. But it certainly feels to a lot of teachers like being put in a terrible position where we’ve been given a thing that is so needed in our community, that people are literally dying for not having access to, and then told, because we were given this, we need to go into live instruction, even though there are so many unanswered questions and concerns about whether that is going to cause an increase in community spread. It is a terrible position to be put into.

There are some unanswered questions as their always will be, but whether this necessarily means an increase in community spread should not be one of them. Dr. Fauci and the CDC have made that point pretty clearly. In fact the CDC clarified yesterday that schools can safely return to classrooms even without vaccinating teachers. But Thiel isn’t looking for any expert guidance, she’s looking to other unions and noting how they are responding:

Around the country, we’re seeing cases where districts do order people to come back. And then what happens next is playing out in the news constantly, right? Like in Chicago, they were ordered back. Lake Oswego, teachers were ordered back. And then there are more things that happen after that. Whether that is through organizing or invoking contractual rights. This is new territory for all of us, of course. But absolutely it’s going to take teachers’ consent at some level in order to open schools. You cannot open schools without teachers.

Oregon isn’t the only place where teachers have been given priority access to the vaccine only to balk at returning to work. Something very similar has happened in Fairfax, Virginia. Teachers there started receiving the vaccine in January only to have union leaders suggest maybe students will have to be vaccinated as well and then, maybe, schools could reopen in the fall.

If teachers are going to the head of the line for the vaccine then they need to return to classrooms. If they intend to refuse then their priority access to the vaccine should be revoked, maybe even on a case by case basis.

She can ask teachers who have no intention of returning to the classroom to delay their vaccines and free up doses for those who will. She and the Legislature should also explore what legal tools they have to require vaccinated staff to return to the classroom. And she should remind them of how many essential workers in food processing plants, grocery stores, social service organizations and more have been going to work without the benefit of a vaccine because that’s what being an essential worker means.

It’s looking like Gov. Brown made a bad bet, i.e. that putting teachers first would make it possible to resume schooling in a way that is better for students. Now that it appears that’s not going to happen, she should own the mistake and address the situation before it gets worse. The very worst outcome here is putting teachers ahead of vulnerable seniors and getting nothing for it. As the Oregonian editorial board put it, “Brown opted to sell out older Oregonians. She should not sell out younger Oregonians as well.”