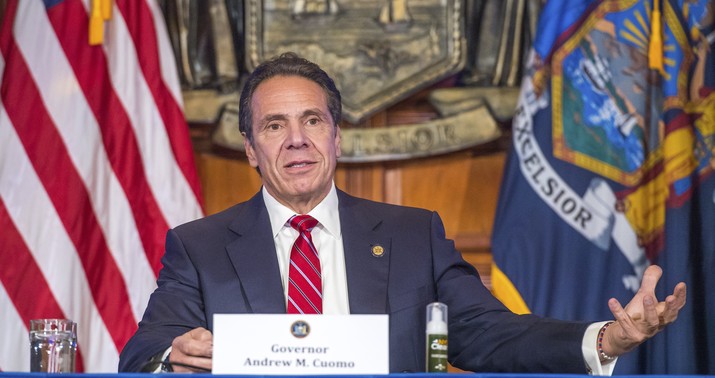 Allahpundit wrote about the big takeaway from this new report earlier. Simply put, NY intentionally undercounted deaths in nursing homes by about 50%. Just to put that in perspective:

Another way to put it:

Florida has about 8k nursing home deaths IN TOTO.

Instead of outrage, Cuomo continues to be greeted as a liberator by progressives in the media.

One of the central issues in this debate was the state guidance requiring nursing homes to accept patients who had been hospitalized with COVID. Criticism of that move was circulating last May and in July the state issued its own report which concluded that decision didn’t have any significant impact on the death toll. The Associated Press noted at the time that some observers saw the report as a political gambit.

For his part, Cuomo claimed criticism of the order amounted to a “political conspiracy” and claimed the report had proven he was not to blame. So with all that background, I was curious what the AG report had to say about the issue. There’s a long section devoted to it starting on page 36:

F. Government Issued Guidance May Have Led to an Increased Risk to Residents in Some Facilities and May Have Obscured the Data Available to Assess the Risk

While government-issued guidance from CDC and DOH based on updated information relating to COVID-19 helped protect many New York residents, nursing home implementation of some guidance may have led to an increase risk of fatalities in some facilities and may have obscured data reported by nursing homes.

Getting into the specifics, the report spells out the dates when the guidance was effective:

On March 25, DOH issued guidance providing that “[n]o resident shall be denied re-admission or admission to the nursing home solely based on a confirmed or suspected diagnosis of COVID-19. Nursing homes are prohibited from requiring a hospitalized resident who is determined medically stable to be tested for COVID-19 prior to admission or re-admission.”43 The guidance was rescinded on May 10 in Executive Order 202.30. From March 25 to May 8, 6,326 hospital patients were admitted to 310 nursing homes. The peak of these admissions was the week of April 14.44 The peak single day in reported resident COVID-19 deaths was April 8, with 4,000 reported deaths occurring after that date.

A few paragraphs later it mentions the ongoing debate over whether or not this guidance led to additional deaths at state nursing homes:

DOH has said that nothing in the guidance stated that a facility should accept patients who could not be safely cared for. As to whether the March 25 guidance affected risks to residents, DOH presented data reflecting the spike in health care worker infection and the later spike in deaths as circumstantial support for the position that the guidance did not contribute much to resident risks or deaths. Criticism since then notes that there has been no presentation of additional evidence as to whether the admission of patients from hospitals to nursing homes may have contributed to COVID-19 transmission or COVID-19 related deaths of nursing home residents. DOH states CDC says COVID-19 positive patients cannot likely transmit the virus after nine days of infection, and that patients are most infectious within two days after symptoms appear. CDC guidance also says there is uncertainty on this. DOH says the median hospital stay was nine days.

Data linking the number of nursing home deaths to the admissions policy contained in the March 25 guidance is obscured by that same guidance, which also prohibited nursing homes from requiring COVID-19 testing as a criterion for admission. This phenomenon was compounded by both the March 21 directive that largely paused the testing of downstate residents, and the under-reporting of nursing home deaths generally (as previously discussed). OAG’s investigation to date has not revealed an admission from any nursing home operator that they could not care for referred residents. However, using the DOH publicized data, 4,000 nursing home deaths occurred after the issuance of the March 25 guidance, including some in 323 facilities that apparently had no reported COVID-19 infections before receiving admissions or re-admissions of hospital residents who had been diagnosed with COVID-19. While additional data and analysis would be required to ascertain the effect of such admissions in individual facilities, these admissions may have contributed to increased risk of nursing home resident infection, and subsequent fatalities (whether due to actual transmission of infection from new residents to incumbent residents, or due to the facilities’ poor self-assessment during the admission process that was followed by failure to provide appropriate care to that patient or other residents.)

The AG can’t prove this happened because the data was obscured by a lack of testing, but it seems likely this contributed to at least some nursing home infections and some deaths. The report points out that this obscurity wasn’t accidental. It was partly the result of state guidance issued on March 21:

OAG preliminary investigations reflected that in the nine downstate counties that experienced higher community-based transmission of COVID-19, some facilities stopped testing residents for COVID-19 after the March 21 guidance was issued. For example, the administrator of a for-profit facility in New York City with CMS 1-Star Staffing and 1-Star Overall ratings alleged in April that the facility was not currently testing residents for COVID-19. He alleged that DOH told the facility to stop testing at some point in March.

In effect, the state issued guidance that got facilities to stop testing incoming patients for COVID and then ordered them to accept patients coming in from hospitals. It would be a miracle if no one caught the virus under these circumstances.

Rent-FREE, baby! Jonah Goldberg pulling his 'BUT TRUMP' card when called out for crediting media on Cuomo coverage BACKFIRES (bigly)