NY AG: New York severely undercounted nursing-home deaths, by as much as 50% 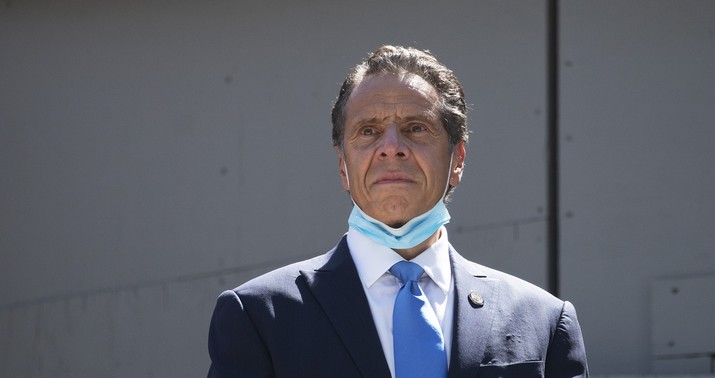 As a famous man once said, “Incompetent government kills people. More people died than needed to die in COVID. That’s the truth.”

Here’s another truth. When more people die than necessary due to mismanagement, an incompetent government might be tempted to cover that up as best it can.

The precise death toll from Andrew Cuomo’s disastrous early policy of returning infected residents to their nursing homes, where they spread the disease, has been debated for months. “New York’s true nursing home death toll cloaked in secrecy,” read an AP headline from August 10, noting a curious quirk in how the state counted fatalities. If you were a nursing-home resident who died of COVID *at* your nursing home, you were part of the official number. If you were a nursing-home resident who died of COVID after being transferred from your nursing home to the hospital, nope. Which is inane, of course. The reason nursing-home residents were considered a discrete “category” of COVID deaths in the first place is because they were unusually vulnerable by dint of their age and the close quarters they kept with other residents and staff. They were dry tinder for a highly infectious virus that hits older people the hardest.

Whether they died on the premises or at the hospital was thus irrelevant. What we wanted and needed to know was how ferociously the virus was spreading at nursing homes and how lethal it was to its victims. That’s a function of where the victim got infected, not where they died. So why didn’t New York count deaths that way?

The state’s attorney general, Letitia James (a Democrat, of course), confirmed today that Cuomo’s administration grossly undercounted those deaths. Go figure that a governor whose policy was to keep contagious residents in their facilities, in proximity to uninfected elderly people, would end up lowballing the magnitude of the disaster in his official count.

The New York State attorney general accused the Cuomo administration of undercounting coronavirus-related deaths at nursing homes by as much as 50 percent, according to a report released on Thursday…

In one instance, an unnamed facility reported 11 confirmed and presumed deaths to the Health Department as happening on site through early August. The attorney general’s survey of that same facility, however, found 40 deaths, including 27 at the home and 13 in hospitals.

“Preliminary data obtained by O.A.G. suggests that many nursing home residents died from Covid-19 in hospitals after being transferred from their nursing homes, which is not reflected in D.O.H.’s published total nursing home death data,” a summary of the report’s findings reads.

As far back as May 5, we were writing about curious undercounts in New York’s tally of nursing-home deaths. In the August story, the AP noted the bizarre fact that New York’s “official” percentage of COVID deaths attributable to nursing-home residents was freakishly lower than in other neighboring states. In New Jersey it was 44 percent, in Massachusetts 64 percent, and in Pennsylvania 68 percent. In New York it was … 20 percent. “Whatever the cause, there is no way New York could be truly at 20%,” said one geriatric expert about the figure.

Other numbers at the time also suggested something greatly amiss with New York’s figures. In a six-week period last summer, New York nursing homes reported 323 dead of COVID to federal regulators. The state’s tally was 195. The AP also noted that there were 21,000 empty nursing-home beds last year when normally only 8,000 or so would be expected.

Plainly, they were cooking the books by defining “nursing-home deaths” overly narrowly. Cuomo explained this in August by claiming that they couldn’t record a nursing-home resident’s death in a hospital as a “nursing-home death” for fear of double-counting, but that’s silly. It’d be simple enough to make that a separate category and then combine it with deaths inside nursing homes to get a true picture. But when state health officials were pressed on that in August, including by Democratic state legislators, they hedged. The number had to be checked for accuracy, said New York’s health commissioner, which one state Dem called “patently ridiculous.”

And so today the truth comes out, at long last. Whether this will do anything in New York to shatter the myth of Andrew Cuomo, Churchill of the pandemic, is uncertain. Probably not, since myths die hard. But find some joy in the fact that one of Cuomo’s most righteous critics, whose in-laws died of COVID in New York last spring, has some vindication today courtesy of his own administration. I’ll leave you with this:

It’s finally happening. @NYGovCuomo is going to have to answer for his role in the nursing home tragedy and the cover up. The angels won.

‘Give me a break’! Megyn Kelly TORCHES Prince Harry and Meghan Markle for their self-serving 'poor us' interview with Oprah and NAILS IT

The Morning Briefing: Trump Informs GOP Higher-Ups That It's Still His Party