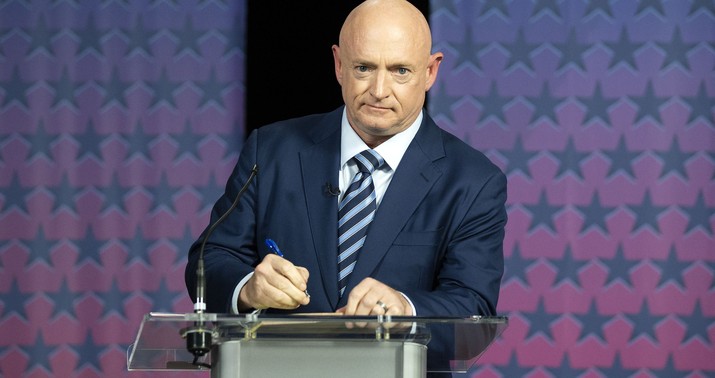 The report appears at a site called National File which is relatively new, having been founded in 2019. But the author of the piece is Patrick Howley who previously dug up the yearbook photos of Gov. Ralph Northam in blackface (or, you know, someone in blackface on Northam’s personal yearbook page). Here’s the image Howley tweeted:

The story itself contains a couple of additional photos from the same yearbook which show different poses. NRSC adviser Matt Whitlock responded to someone who doubted the story by posting the full image which is not included in the National File story.

Kelly’s campaign quickly published a statement denying that he appears in any of the photos or ever wore this costume. As you can see there’s also two additional statements denying the photos are of Kelly from two of his classmates who both say they attended the party in question.

See below for a statement from another of Mark’s classmates who attended this event #AZSEN pic.twitter.com/WFgTuaf3zT

So far, National File hasn’t retracted or corrected the story.

Recent polls suggest a very tight race for the Arizona Senate seat currently held by Martha McSally. Obviously the previous situation with Gov. Northam shows stuff like this isn’t necessarily a deal-breaker for Democrats so long as they judge the person to be sufficiently penitent. Northam initially admitted he was in the photo and then changed his story and said it wasn’t him. Kelly’s camp went straight to a denial and seemed to have the statements from classmates lined up. Did they know this was coming?

Update: National File has updated the story with additional photos from Kelly’s yearbook. They claim one of the photos shows him in the same sunglasses. I don’t know. They look like standard aviators to me. I’m sure he wasn’t the only person with glasses like that in his class. Also, National File still hasn’t added the denials to the story.