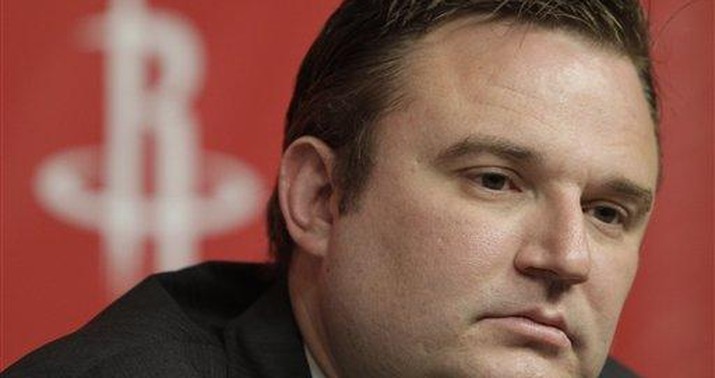 Well, it took a year but it looks like Rockets GM Daryl Morey is finally paying the price for his comments in support of Hong Kong.

…Morey approached owner Tilman Fertitta with the idea of leaving the job, and the sides quietly worked through an exit agreement to conclude his 13 seasons running the franchise’s basketball operations, sources said.

There had been leaguewide uncertainty about Morey’s job security since his tweet affected the NBA’s and Rockets’ business relationships with China, costing Fertitta millions of dollars in sponsorship money.

ESPN makes clear that Morey’s run as GM was nothing short of a tremendous success:

Under Morey, the Rockets have the league’s longest consecutive playoff appearance streak with eight — advancing in the Western Conference playoffs in each of the past four years…

The team has the league’s second-best regular-season record over his 13 years as general manager and 14 years with the franchise. He signed a five-year contract extension in March 2019.

October 9, 2020 – The NBA mends its relationship with China, Games return to state TV.

He's out six days after the NBA and China come back together. Something seems off.

2/ I have always appreciated the significant support our Chinese fans and sponsors have provided and I would hope that those who are upset will know that offending or misunderstanding them was not my intention. My tweets are my own and in no way represent the Rockets or the NBA.

But it was too late. China pulled the NBA off the air. Speculation at the time was that Morey was in danger of losing his job. Meanwhile, the NBA’s top players rushed forward to apologize for his statement. James Harden and Russel Westbrook were in Tokyo when the story broke:

“We apologize. You know, we love China. We love playing there,” Harden said. “For both of us individually, we go there once or twice a year. They show us the most important love.”

Coach Steve Kerr who often has something to say on social issues suddenly didn’t want to comment. Woke superstar LeBron James finally spoke about the issue a week later saying Morey wasn’t “educated” about the situation in Hong Kong. LeBron also suggested that maybe Morey deserved to be punished for having cost the league millions of dollars.

In July of this year we learned that the NBA had actually created training camps in Xinjiang at which prospective young players were physically beaten by Chinese coaches. The NBA knew about this even before Daryl Morey’s tweet but only after the tweet, with more eyes upon the NBA, did they pull down the training center’s website.

We all know how things worked out in Hong Kong. This year China passed a new security law which effectively ends Hong Kong’s independence and makes it a major crime to voice support for Hong Kong’s freedom. A crackdown on democracy activists soon followed.

Daryl Morey was right to speak out when he did. The NBA should take some time to think about the degree to which their willingness to look the other way may have actually encouraged China to believe it could curtail the freedoms of millions of people without facing much of a backlash.

China’s ability to instantly erase the entire NBA’s presence in China over one general manager’s speech on a platform that isn’t even allowed in China ought to have been a warning to the league about who it was doing business with. But instead of this experience prompting some second thoughts about China’s willingness to crush dissent the NBA simply fell in line.

To this day, outspoken figures in the NBA like Mark Cuban still won’t directly criticize China’s abuse of human rights in Xinjiang or Hong Kong because “They are a customer of ours.” It’s a disgusting display of hypocrisy from an organization which had spoken out on any number of social issues in the recent past.

Yeezus Saves? New Poll Out of Minnesota Is Going to Have Team Biden Fuming