Mark Cuban on the NBA’s support for BLM and China 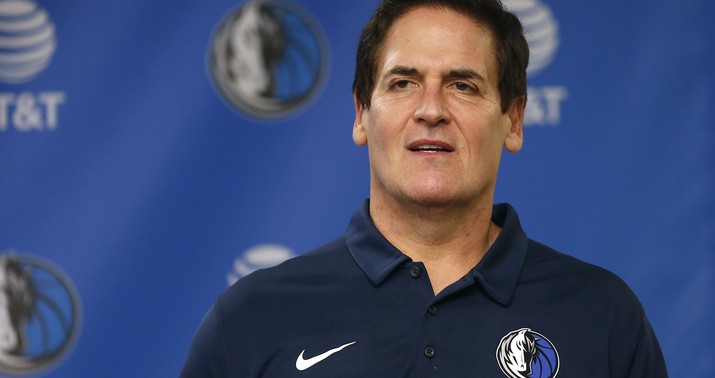 Mark Cuban appeared on Megyn Kelly’s podcast which was posted today. The entire interview was 50 minutes long and Kelly spent a significant amount of time pressing him on the NBA’s support for both Black Lives Matter and China.

Kellly pointed out that BLM was founded by a group of Marxists and supports some fairly extreme views about things like the nuclear family and defunding the police. Cuban argued that the NBA supports “the movement” not the official BLM organization which he referred to as “BLM.com.”

“If we were supportive of those three founders, don’t you think that we would have had one of them on an NBA broadcast to talk about it?” Cuban said.

“The main takeaway on BLM, the main push, this is what they say their single issue is, their biggest issue— whenever you see a representative from the group, an organizer, people who go to the protests it’s one thing: defund the police,” Kelly replied.

“No, that’s crazy!” Cuban said. Cuban then spent several minutes arguing that defunding the police is not what BLM is about. “We’re supporting of trying to end racism. We’re supportive of police reform but you’ve never, ever heard us talk about Marxism,” he said.

“To pretend that Black Lives Matter, dot com or otherwise, is not about defunding the police is to be dishonest,” Kelly argued. “And the basketball players who have spoken about this have made clear that they support that. They’ve talked about how they want to defund and dismantle the police force,” she added.

“Individual players can have their opinions, right?” Cuban said.

The argument goes on like this for several more minutes. To sum up, Cuban admits the founders of BLM are Marxists but claims the NBA doesn’t support that. Cuban admits outspoken players support defunding the police but claims the NBA doesn’t support that either. Furthermore he claims those things are not really central to the “movement” known as BLM. Even when Kelly points out that several cities have already defunded the police in response to BLM’s demands, Cuban denies this is what BLM is about.

Cuban goes on to deny that flooding the NBA with politics had anything to do with the disappointing ratings for the finals this year. He admitted that the ratings were lower than expected but said things like horse racing were also down this year. Kelly pointed out that football and baseball were not down by similar amounts. In fact, it appears Sunday Night Football got much higher ratings than the NBA finals last night:

ABC’s broadcast of the Los Angeles Lakers’ victory over the Miami Heat in Game 6 of the 2020 NBA finals was no match for “Sunday Night Football” on NBC, according to the earliest available Nielsen numbers.

Last night, the Lakers’ 106-93 defeat of the Heat was down 57% in TV ratings from the big finish of 2019’s NBA finals, when the Toronto Raptors beat the Golden State Warriors…

NBC was first in ratings with a 2.7 rating/15 share in the advertiser-coveted 18-49 demographic and in total viewers with an average of 10.1 million, according to preliminary numbers…

Cuban didn’t really have an answer for that except to argue that broadcast television is down overall and so was the Stanley Cup Finals. “The whole thing about politics is nonsense,” Cuban said.

Finally, Kelly turned to the question of the NBA’s connection to China noting that she’s been told “silence is violence.” Just moments after he defended the NBA’s embrace of politics when it came to BLM, Cuban suddenly reverses course and doesn’t want politics to interfere with the NBA’s business with China.

“The question remains, why won’t you and the NBA explicitly condemn that?” she asked Cuban, one of the league’s most vocal owners.

“I personally put a priority on domestic issues. I’m against human rights violations around the world,” he responded.

“Including the ones in China?” Kelly asked.

“China is not the only country with human rights violations,” Cuban replied.

“Including China, Mark?” she later pressed after some cross-talk.

“Yes, including China. Any human rights violations anywhere are wrong,” Cuban responded before also mentioning Turkey and some countries in Africa as other places where abuses occur.

“Why would the NBA take $500 million dollars-plus from a country that is engaging in ethnic cleansing?” Kelly later asked.

“So basically, you’re saying nobody should do business with China ever,” Cuban retorted.

Kelly continued to press him  Eventually Cuban stated, “They are a customer of ours, and guess what, Megyn? I’m OK with doing business with China. You know I wish I could solve all the world’s problems, Megyn, and I’m sure you do too. But we can’t. So we have to pick our battles.”

So they support BLM, but not the controversial parts, and they support China despite the racism and human rights abuses. Cuban is trying to square a circle here and it just doesn’t make any sense apart from the millions China is paying.

You can listen to the full podcast here. Here’s the segment of Cuban and Kelly sparring over Black Lives Matter:

Mark Cuban and @MegynKelly get in-depth on the NBA and social justice – from on-court messaging this season and "Black Lives Matter" to "The Talk" Cuban has discussed with his players.