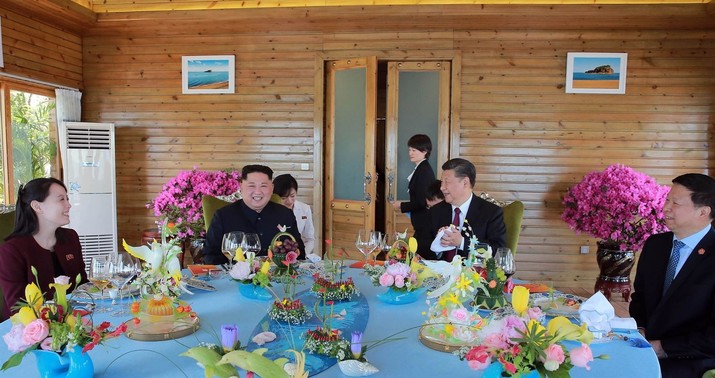 Anna Fifield is a Washington Post reporter who covered Japan and both North and South Korea for the paper from 2014 to 2018. Last year she published a book about North Korea titled, “The Great Successor: The Divinely Perfect Destiny of Brilliant Comrade Kim Jong Un.” All of that to say, she definitely knows something about the region. Yesterday the Post published Fifield’s take on her most recent trip to China’s Xinjiang region. It opens with her account of the “enforcers” and undercover cops both on foot and in cars who followed her everywhere she went:

The first pair of enforcers were waiting at the temperature check before baggage claim at the airport in China’s western Xinjiang region. “Passports,” they said as the three foreign journalists came off a domestic flight from Beijing this month.

Asked why we were being pulled aside, they said we needed to know to wear masks because there had been a coronavirus outbreak in Xinjiang in July. We were wearing masks. They photographed our information pages and journalist visas.

It was the start of four days of intense surveillance and nuisance checkpoints designed to obstruct our reporting and ensure that local people were too afraid to talk to us. There were the cars that tailed us everywhere — “Honda 25,” “VW 35,” we would chime as we spotted their license plates — and the Keystone Kops, men who would jump behind bushes or pretend to talk on their phones while obviously following us.

Fifield describes wanting to interview people on the street about their experiences. Many of the people on the street probably know something about the re-education camps in the region. But anyone she spoke to would be marked by her minders and could wind up in those camps themselves for speaking to a foreign reporter. So she kept her distance and just observed. And what she saw reminded her a lot of North Korea:

There is still a level of latitude and commerce and vibrancy here that is unimaginable across the northeastern border, but some days China really feels like North Korea.

Like the day the People’s Daily featured Xi’s name in more than a dozen headlines on its front page. Or any of the days I’ve walked into a bookstore and seen nothing but the three volumes of Xi’s “The Governance of China” on display. Or on Oct. 1 last year, when I watched as a huge portrait of Xi rolled through Beijing on top of a black car for National Day celebrations.

The cult of personality around Xi can’t tolerate much dissent. Back in March, a Chinese business tycoon named Ren Zhiqiang wrote an essay criticizing Chinese state media and President Xi in particular. He was arrested and simply disappeared for several months. Last week China announced that the 69-year-old had been sentenced to 18 years in prison for graft, taking bribes and a few other made up charges. But it’s clear to everyone what his real crime was.

Mr. Ren’s supporters and sympathizers said that his real crime was criticizing the Communist Party and calling the country’s hard-line leader, Xi Jinping, a “clown.”

“Very clearly this was punishment for his words, that’s going to be obvious to everyone,” Guo Yuhua, a sociologist in Beijing, said by telephone. “Those economic problems — this one, that one — can be concocted whenever you want.”…

“Cracking down on Ren Zhiqiang, using economic crimes to punish him, is a warning to others — killing one to warn a hundred,” said Cai Xia, an acquaintance of Mr. Ren’s who formerly taught at the Central Party School, which trains rising officials.

“It’s a warning to the whole party and especially to red offspring,” Ms. Cai said, referring to the children of party officials. She spoke before the court’s judgment in a telephone interview from the United States, where she now lives.

In a series of policy announcements and meetings, they have emphasised that private companies have an important role to play in “United Front work” — a euphemism for efforts aimed at ensuring that non-party organisations and entities support the party’s top policy objectives as well as its iron grip on power…

Under the new guidelines, party committees that previously wielded little power at private companies are supposed to play a role in personnel appointments and other important decisions…

“What Xi really wants is an increasing share of the economy controlled by state-owned enterprises,” said one government adviser.

China under Xi Jinping is heading toward more communism and less freedom for individuals and businesses. That will certainly be a disaster for the country over time, just as it is in North Korea but there’s no reason to think Xi is anything but deadly serious about being the world’s leading dictator.