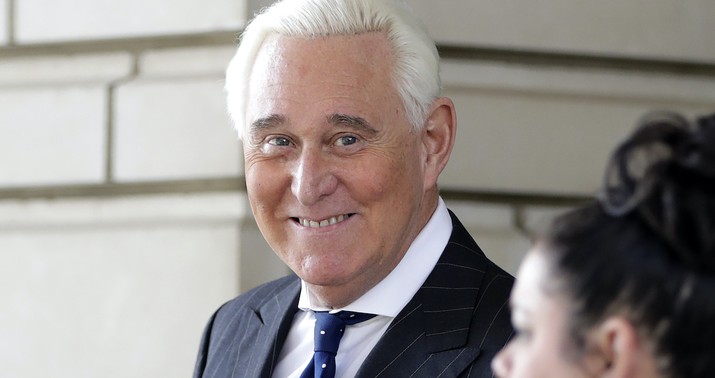 There were several reports that this was imminent earlier this afternoon and now, according to a few people on Twitter it has happened:

Sources tell me that President Trump has just called Roger Stone to let him know that Stone's sentence will be commuted & he will be spared from serving time in prison.

Earlier this afternoon NBC’s Howard Fineman tweeted this, which many took at Stone saying that President Trump owed him a favor for keeping silent.

Just had a long talk with #RogerStone. He says he doesn’t want a pardon (which implies guilt) but a commutation, and says he thinks #Trump will give it to him. “He knows I was under enormous pressure to turn on him. It would have eased my situation considerably. But I didn’t.”

Here’s one person who took it that way.

So here’s Roger Stone explicitly asking @realDonaldTrump for executive clemency on the ground that Stone refused to provide evidence against Trump.

This couldn’t be more corrupt. https://t.co/xMLsEiNmAz

But according to John Cardillo, Stone says he was taken out of context.

They're skewing context that he "wouldn't flip on Trump."

His point was Mueller's team demanded he lie and claim Trump did wrong. Roger refused.

There were indications earlier today that a pardon might be happening today.

President Donald Trump said Friday that he will be “looking at” a possible pardon for his longtime ally Roger Stone, who is set to report to federal prison in less than a week.

Based on the early reports above, this is not a pardon but a commutation, meaning Stone won’t spend any time in prison but the conviction won’t be wiped from his record.

Yesterday, Politico reported that there was a sharp divide between those inside the White House and those outside over whether President Trump should intervene before Stone headed to jail next week:

Stone has little support in the White House and the Trump campaign. Corey Lewandowski, the 2016 campaign manager who advises the current reelection effort, has called Stone a serial liar. Stone’s friends say there’s also animosity with the campaign manager, Brad Parscale. Even Attorney General Bill Barr, who gummed up other investigations into the president, supports Stone’s imprisonment.

But outside the campaign and White House, Stone has support from influential backers that include Fox News’s Sean Hannity and Tucker Carlson, Newsmax founder Chris Ruddy and Florida Rep. Matt Gaetz, a top Trump ally.

Gaetz has been so aggressive pressing the president for a pardon that it’s led to grumbling in the White House and among fellow Republican House members.

Stone was sentenced back in February and at the time there were actually two recommendations being put forward by prosecutors, one of 7-9 years and one of less than that. Stone was eventually given 40 months. Asked about it later, AG Barr said he agreed with that sentencing:

Attorney General Barr believes Roger Stone prosecution was “righteous” and that he should serve prison time and acknowledges that the decision to pardon Stone is the Presidents call. pic.twitter.com/yLkCZNEDah

But it looks like Matt Gaetz won this battle. Here he is making the case for pardoning Roger Stone on the view back in February.