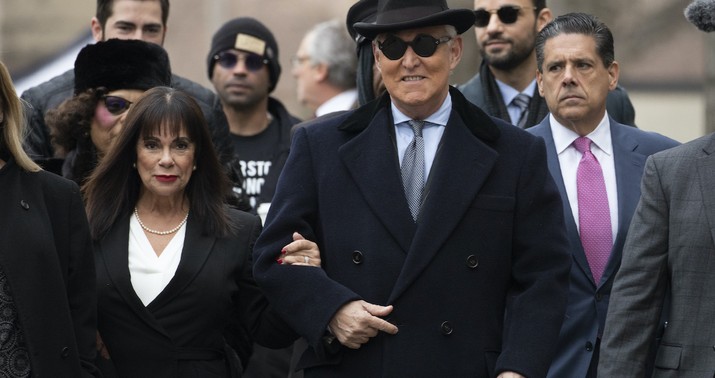 It’s a long ways off from the original sentence recommendation by the Department of Justice, but it’s still a significant amount of time. Judge Amy Berman Jackson leaned more toward the modified DoJ application in sentencing Roger Stone to 40 months in prison, at the end of a strange sentencing hearing that will raise all sorts of questions again about what happened between the two filings.

Stone will get a short reprieve while Berman Jackson considers his motion for a new trial:

A federal judge on Thursday sentenced Roger Stone to 40 months in prison for lying to Congress and witness-tampering—rejecting the original recommendation by prosecutors that infuriated President Trump.

“The truth still exists. The truth still matters,” Judge Amy Berman Jackson said before handing down the sentence. “Roger Stone’s insistence that it doesn’t—his belligerence, his pride in his own lies—are a threat to our most fundamental institutions, to the very foundation of our democracy.”

Stone won’t immediately go to prison. Jackson is weighing a motion from his lawyers for a retrial. Stone’s team argues that anti-Trump social media posts from the jury forewoman mean his conviction is tainted by political bias. President Donald Trump has tweeted the same sentiment.

Jackson denied that claim at the Thursday hearing, declaring that “he was not prosecuted, as some have complained, for standing up for the president.

“He was prosecuted for covering up for the president,” she said.

Berman Jackson seemed somewhat mystified by the change in position by the DoJ after William Barr’s intervention last week. In fact, it wasn’t at all clear that the position had changed. At times, according to multiple media outlets, prosecutor John Crabb appeared to be arguing in favor of both sentencing recommendations. That led to an odd exchange near the end of the prosecution’s presentation:

ABJ: With respect to the second filing — you signed it. Did you write it?

Crabb: I’m not at liberty to discuss the internal deliberations in DOJ.

ABJ: Were you directed to write it by someone else?

Hoo boy. That sounds like a tacit admission of Crabb being forced to change the filing by his superiors, which will raise all sorts of eyebrows in Congress. William Barr is already scheduled to testify at the House Judiciary Committee next month, and it’s a safe bet committee chair Jerrold Nadler will call Crabb as well. There isn’t anything illegal about an Attorney General directing prosecutors on a case, but given Donald Trump’s public complaints about it — right through this morning — it raises the question as to whether the intervention is politically motivated rather than in the interest of justice and fairness.

This is precisely why Barr told ABC News last week that Trump’s tweets make his job “impossible.” Having Crabb argue both recommendations in court today makes his position even more curious, Aaron Blake argues at the Washington Post, although perhaps less fraught now:

Barr intervened last week to overrule career prosecutors’ tough, seven-to-nine-year sentencing recommendation for Trump ally Roger Stone — shortly after Trump tweeted in opposition to the recommended sentence. That prompted the four prosecutors on the case to withdraw. Then came a more watered-down recommendation, which was signed by the prosecutor now leading the charge for the Justice Department, Assistant U.S. Attorney John Crabb.

But at Stone’s sentencing hearing on Thursday, Crabb sounded a very different tone. He repeatedly appeared to push the recommendation in the direction of the initial prosecutors’ harsher one, arguing for enhancements that the more recent memo suggested were unnecessary or unsubstantiated. …

One has to wonder whether Barr told Crabb to submit the second recommendation but feel free to argue the first just to rid himself of the suspicion. If so, it probably won’t work.

Back to Stone’s status, whose reprieve might be longer than it now looks. As ABC’s Cecelia Vega tells George Stephanopoulos, the question isn’t whether Trump pardons Stone, it’s when. And some are suggesting that a pardon may come down within days, if not hours:

.@CeciliaVega on pardon speculation for Roger Stone: "It could be hours, it could be days…but I don't think this is going to be a big surprise to anyone when, in fact, if Donald Trump pardons Roger Stone." https://t.co/2PtRAp8Hr1 pic.twitter.com/wPTfFOzaLa

To get a sense of where this is going, behold Trump’s pinned tweet as of this morning:

A clemency action is all but certain; the only questions, as Vega says, is what form and when. Now that a sentence has been issued, it could be a commutation, but Trump seems more inclined to issue a full pardon. The only caveat might be whether Stone gets a new trial and prefers to try to clear his own name first. If not, though, Trump can use his authority to cut through the red tape and end the prosecution directly.

In fact, he’s had that authority all along. So why didn’t he do that, rather than make it look like he was interfering in the prosecution?