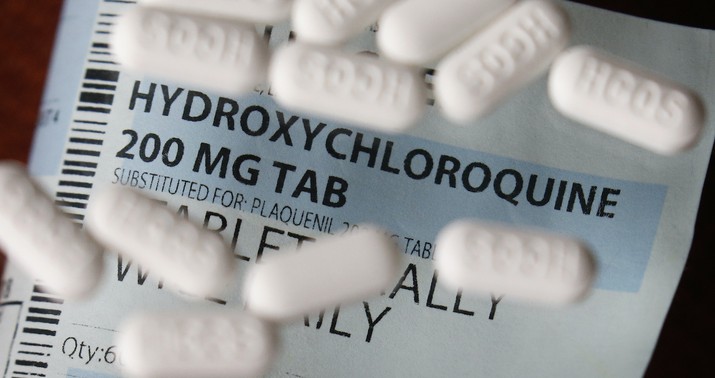 It seems the debate over the effectiveness of this drug isn’t over yet. The Henry Ford Health System based in Detroit, Michigan has produced a retrospective observational study which found hydroxychloroquine was effective in reducing the death rate of patients who received it.

The study analyzed 2,541 patients hospitalized among the system’s six hospitals between March 10 and May 2 and found 13% of those treated with hydroxychloroquine died while 26% of those who did not receive the drug died…

“As doctors and scientists, we look to the data for insight,” said Steven Kalkanis, CEO of the Henry Ford Medical Group. “And the data here is clear that there was a benefit to using the drug as a treatment for sick, hospitalized patients.”

The study, published in the International Society of Infectious Disease, found patients did not suffer heart-related side effects from the drug.

Cutting the death rate in half is a pretty dramatic result. The catch here is that this was not a double-blind, randomized study in which patients were assigned to various treatment groups and then treated without doctors knowing who is in each group. Instead, this is a retroactive look at treatment received by people who entered the hospital system over a period of time. And since treatment groups weren’t assigned, that means it’s possible some of the people who did not receive the drug were judged by doctors to be too ill to make it beneficial. Obviously if the sickest patients tend to wind up in the ‘no treatment’ group it’s very likely their death rate is going to be higher.

For contrast, a UK study of hydroxychloroquine announced last month found that it offered no benefit. This study had no connection to the one that was retracted last month after it was learned the data was bogus:

Hospitalized Covid-19 patients given the antimalarial fared no better, and had no better chance of surviving the disease, than patients who didn’t receive the drug, according to researchers leading the roughly 4,500-subject trial.

“If you’re admitted to hospital with Covid—you, your mother, your friend, or anybody else—hydroxychloroquine is not the right treatment. It doesn’t work,” Martin Landray, an Oxford University epidemiologist who is helping lead the study, said in a call with reporters.

But Dr. Marcus Zervos who co-authored the Michigan study believes the success his study identified was the result of early intervention:

Roughly 82% of the patients began receiving hydroxychloroquine within 24 hours and 91% within 48 hours, a factor Dr. Marcus Zervos identified as a potential key to the medication’s success.

“We attribute our findings that differ from other studies to early treatment, and part of a combination of interventions that were done in supportive care of patients, including careful cardiac monitoring,” said Zervos, division head of infectious disease for the health system who conducted the study with epidemiologist Dr. Samia Arshad.

So it’s still possible this has some benefits but this is just one of several studies. In fact, there are more studies underway at the Henry Ford Health System related to the effectiveness of hydroxychloroquine and some of those studies are of the double-blind, random variety that are considered the gold standard.